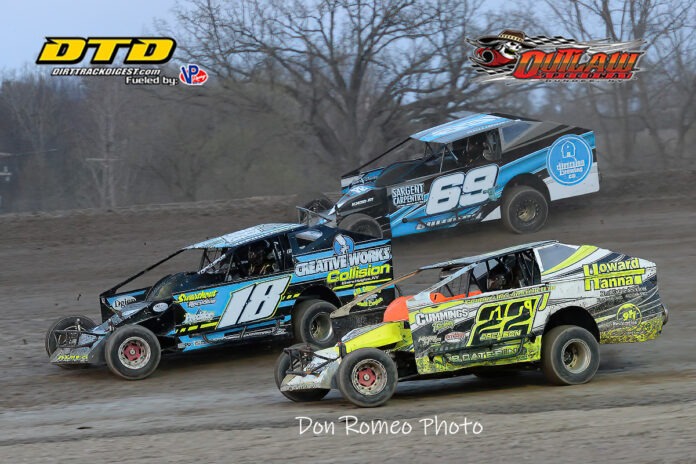 DUNDEE, NY – Friday, May 14, 2021 will kickoff a huge week of race action at the Outlaw Speedway in Dundee, NY.

The 1st Annual running of the Mike Jackson Memorial will go off first on Friday followed by the Short Track Super Series mid-week event scheduled for Tuesday, May 18.  Then on Friday, May 21 it will be Active Duty and Veteran’s Night at the track.

“This is a racers dream week, stated Outlaw Speedway owner/promoter, Tyler Siri.  I’ve scheduled two Super 7 Shows for Friday May 14 and 21.  Sandwiched in between we have arguably the biggest Modified event of the year on Tuesday the 18th with the Short Track Super Series where many of the top guns in the northeast will be here to try and tame the Fast 4/10 of a Mile.”

Mike Jackson was a competitor not only at Outlaw but a most tracks across the region.  He ran primarily in the Modified Division driving for several different car owners in addition to fielding his own equipment, however he found his niche in the 305-winged sprints right until his passing on December 29, 2020 after a long battle with cancer.

In addition to his career as a driver, Jackson was also a promoter of the then Black Rock Speedway, now Outlaw Speedway having taken the helm of the popular Yates County oval some seven years ago for just one season.

“Mike was a huge supporter of this facility throughout most of his career, claimed Siri.  Like several others who have dedicated many years of their lives to Outlaw Speedway it’s in the memory of Mike Jackson that we have a night in his honor.”

On the card for the May 14 event the Mighty Friendly Chrysler, Dodge, Jeep, Ram Modifieds will headline the card along with the Lane’s Yamaha 360 Sprints.  A pair of 602 Crate Sportsman Divisions will also see race action as both the Sunrise Insulation American Racer Tire Sportsman as well as the Hoosier Tire shod Speed Connection DIRTcar Sportsman.

In addition, the Stan’s No Tubes Street Stocks, the NAPA Hobby Stocks along with the Winner’s Circle Deli Mini Stocks will take to the speedway for a regular show.

Fans that plan on attending upcoming events should continue to keep an eye on the tracks Facebook for any changes in NYS Health Department protocol regarding admittance into the facility.

All information relevant to the Tuesday, May 18 STSS event including support divisions, gate and start times will be posted in press release form as the time draws closer.

For all other information including the complete 2021 Outlaw Speedway schedule of events, Class rules, track contacts and marketing partners can be found by logging on at www.outlawspeedwayllc.com.