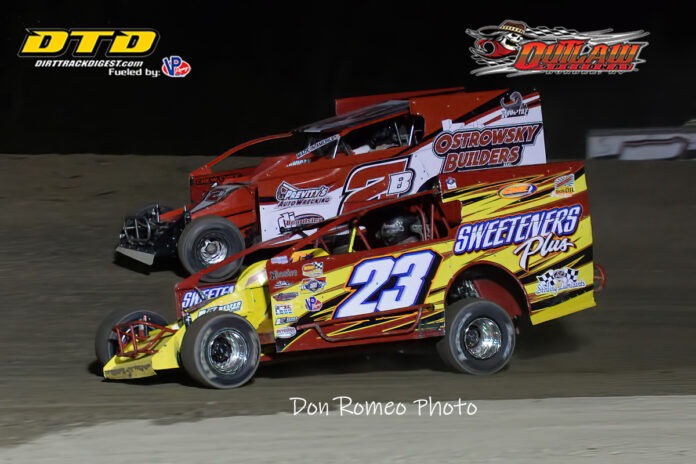 DUNDEE, NY –The 30-lap Friendly Chrysler Dodge Jeep Ram Outlaw Modified feature got off to a rough start, with a multi car pileup on a lap 4 restart eliminating 3 cars, and on the next attempt, Jeff Daugherty went straight off the first turn into the protective foam.  When racing resumed, Ron Cartwright held the lead over Kyle Coffey with JIm LaRock and Phil Vigneri III battling behind them, joined by Bobby Varin.  Coffey was able to wrestle the lead away from Cartwright on lap 23 and Cartwright’s car gave out of lap 26, moving Vigneri III to second.  Coffey outran Vigneri III on the final restart for his first win of the season at Outlaw, with VIgneri III second.  Bobby Varin made a move to take third on the final lap from Steve Paine with Jim LaRock fifth.

In the 25-lap Lane’s Yamaha 360 Sprint Car feature, Jared Zimbardi blasted out to the early lead, but a caution a few laps in closed the field for a restart, allowing Johathan Preston to pick up a pair of spots to get to second place.  Preston spent the rest of the feature chasing down Zimbardi, and the two put on a show over the final two laps, trading slide jobs back and forth as they diced for the lead.  Zimbardi was able to hang on and brought home his first win of the year over Preston.  Craig Lane was third, followed by Scott Holcomb and Jason Barney.

The Speed Connection Hoosier Tire Sportsman feature began with AJ Lloyd taking the lead with Alex Payne and Ajay Porzebowski Jr. coming up quickly through the pack.  Payne took the lead from Lloyd on lap 14 after the pair had a spirited battle, with Potrzebowski Jr moving into second one lap later.  Payne held his distance over Potrzebowski Jr to the finish and nabbed another win, with Potrzebowski Jr a close second.  Lloyd held on for third with Adam Hilton and Nichole Hoag completing the top five.

Jayson Smart led the opening two laps of the Winner’s Circle Deli 4 Cylinder feature before Kenneth Evans took over the top spot.  Evans pulled away while Scott Lehman, MIke Stone, Matt Irwin, and Smart diced for the rest of the top five spots.  Lehman had an issue on lap 15 and dropped out while Evans cruised to the win, followed by Stone, Irwin, Smart, and Rich Sharpsteen.

Justin Eldredge passed Joshua Oles three laps into the NAPA Hobby Stock feature and pulled a solid lead that he carried to the checkers, with Oles taking second.  Marc Minutolo was finally able to take third over Jamie Eldredge Jr with a last lap pass.

In the 25-lap Sunrise Insulation American Racer Sportsman feature, Doug Kline took the early lead from Alexandria Smith till a lap 6 yellow for Tommy Paine’s spin.  Payne took the lead on the restart, but the action was halted on lap 13 when Ajay Potrzebowski touched wheels with Karl Comfort, sending him into a series of twisting flips off turn three.  Racing action at that point was halted, with the remainder of the feature to be run next Friday night.

The Stan’s No Tubes Street Stock feature will also be held over to run next Friday.
Racing continues at Outlaw Speedway on Friday, May 28th when the RUSH Crate Late Models appear for the annual Gary Montgomery Memorial to join a Super 6 Show.  Racing begins at 7:30 p.m.  For more information, visit www.outlawspeedwayllc.com .