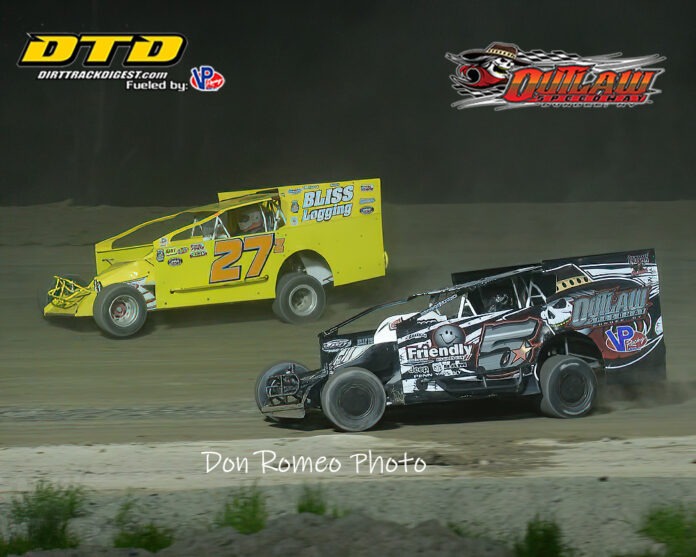 DUNDEE, NY– Outlaw Speedway owner and promoter Tyler “The Bossman” Siri delivered a very special victory to his loyal crew member and speedway employee Josh “Bugger” MacMillan. Friday was a race night in memoriam of Josh’s parents Arthur and Cynthia MacMillan and there’s no doubt they were shining down for the 5* team on this night.

The Friendly Dodge, Chrysler, Jeep, Ram Modifieds put on a show worth of admission price as the top five cars were all bunched together jockeying for position in the closing laps. Billy Paine and Ron Cartwright Jr. led the field to the green flag for the 30-lapper with Paine leading the opening two circuits.

Cartwright wanted the lead and wanted to set the pace so he dove low in Turn 1 and pulled a wicked slider on the fast, wide Outlaw Speedway surface to get by Paine. The two made contact which motivated Paine by the time they hit turn three- but Cartwright had hitched up the wagons and was gone. Cartwright would lead while Tyler Siri, Danny Johnson, Derrick Podsiadlo and Bobby Varin all gave chase.

Varin, who started eleventh on the starting grid, took advantage of the extreme bottom lane while Siri and “The Doctor” was slicing away at each other with slide job after slide job. Varin would eventually work his way by to take over the runner up spot and set his sights on Cartwright. Varin would catch him with two to go and as the two raced through three and four- calamity ensued.

Varin and Cartwright made contact while racing into turn four, sending Cartwright spinning and needing the assistance of the tow truck. Varin was sent to the tail of the field for his involvement in the incident, ruining what had been an impressive charge to the front. Simultaneously in a separate incident, Johnson got over the cushion into the loose dirt and slid back several positions.

This would hand the race lead to Siri who very badly wanted to bring a win home for “Bugger” and this was just that chance to do so. Podsiadlo in one of his best runs in several seasons at Outlaw restarted second but was no match for Siri who was the rabbit on the restart and cruised home for the $2,000 Arthur & Cynthia MacMillan Memorial victory. Podsiadlo, last week’s winner Kyle Coffey, Steve Pain and Johnson filled out the Top 5.

Lanes Yamaha 360 Sprint Cars took to the track for their 25-lap A-Main and it was the fearless Paulie Colagiovanni who would win a thriller on the “fast four-tenths-mile.” Colagiovanni started from the sixth spot while Jonathan Preston brought the field to green.

Preston was on the hammer on the opening lap but caught the turn 4 concrete on his way by to complete lap 1. That would start the downhill trend for Preston as just a few short laps later the bird cage broke on his Williams Insurance Agency No. 22 and he slowed with a right rear flat tire, ending his night.

This handed the lead to Bradford, PA pilot Jared Zimbardi who was ripping the top cushion all the way around the speedway. But Colagiovanni was not far behind and was closing as Zimbardi navigated slower traffic. Lap 22 saw Colagiovanni hustle his All Star Performance, IndyKart Raceway No. 10 toward the tires in turn one and shoot all the way to the top. Colagiovanni served up a slider with all the fixings to take the lead and never looked back.

The win was complete with a climb to the wing in victory lane and cheers from the crowd. It was a great win for the team and one of their crew members Brent Hoover from Penn Yan- who has been wrenching on sprint cars for many years and finally wrenched a sprint car to victory lane at what he considers his home track.

Adam Hilton got back to victory lane in the Speed Connection Hoosier Tire Sportsman division. Hilton was lightning quick right off the drop of the green flag, moving from his eighth starting spot to third within two laps. Tim Guild had a solid night going in his No. 06, leading the opening nine laps and finishing with a top five.

Hilton took command at the halfway mark on lap 10 and looked to have things in hand. That was until Canandaigua, NY youngster Alex Payne set sail on the top side and ran Hilton down to battle for the lead. Payne tried lap after lap to set something up to make a move for the lead but Hilton had just enough gear on the top to keep riding the momentum off the exit of the turns.

Hilton scored the win over Payne, Zac McDonald in third with his best finish since moving to the states this Spring from Nimbin, New South Wales, Australia. Ajay Potrzebowski Jr. drove from the back of the field twice to come home fourth and Guild rounded out the top five.

In American Racer Sportsman action sponsored by Sunrise Insulation, Alex Payne and Chris Fisher split feature victories. Payne sealed the deal in his Friendly Dodge, Castrol Oil, Emerson Oil Co. No. 70A in the makeup feature that had to be finished following a scary red flag situation a few weeks ago. Payne was the class of the field in that feature to score the win over Watkins Glen Auto Parts driver Brian Fish, Doug Kline, Karl Comfort and Ajay Potrzebowski Sr.

In the night cap for the American Racer Sportsman it was Penn Yan’s Chris Fisher bouncing back in a huge way after destroying the front clip on his car a few weeks ago during the Short Track Super Series event. Fisher sent the car to Bicknell U.S. afterwards for a front clip and received the car back after the long Holiday weekend on Tuesday night. The Fisher crew thrashed all week just to even have it race ready on Friday.

Payne tried to go for the sweep in the division, but a flat right rear sneaker with eleven laps to go ended his charge up to second spot- he would finish eighth. Karl Comfort was the smooth operator driving from seventh to second, Dale Welty put together a fairly uneventful run for third, Doug Kline fourth and Potrzebowski Sr. fifth.

Glenn Wrightenour picked up a popular win in the Stan’s No Tubes Street Stocks on Friday night. But it was far from a runaway victory. Zach Teed led the opening lap before surrendering that spot to Gene Sharpsteen on Lap 2. Sharpsteen would soon see company from Elmira’s Chuck Winslow and they would go back and forth, outside versus inside lane with Winslow eclipsing the leaderboard on Lap 11.

Just as Winslow took the lead, Sharpsteen and Whritenour had a little bit of contact that sent Whritenour over the cushion and back to about fifth or sixth place. From there, Whritenour would put on a charge to the front with caution thrown to the wind. By Lap 15, Whritenour was there with Winslow to battle and took the lead just one lap later. The final four laps saw Whritenour open up a 1.744 second lead at the checkers.

One of the best battles of the night took place in the Napa Auto Parts Hobby Stocks. “Mr. Smooth” Marc Minutolo and young driver Willy Easling put on a show for the fans as the two traded the lead and traded slidejobs for the top spot in their 20-lap feature. Easling took the lead for the final time on Lap 14 but would have to survive a last lap dash from Minutolo who got side by side in Turn 4 but would lose the drag race to the line to Easling.

The Winners Circle Deli 4-Cylinders also looked to be a ferocious battle for the race win as Scott Lehman and Rich Sharpsteen fought back and forth for the top spot. The battle intensified to a crescendo with Sharpsteen spinning to the infield to draw a yellow flag, he would recover to fifth.

The only way Kenneth Evans was going to be stopped on this night was to keep him off from the topside cushion. Lehman and Mike Stone did that for the first half of the race but as they battled for the lead, Evans found an opening to get to the high side. Once he did, it was all over but writing the check. Evans blistered the second half of the race to win by 5.594 seconds at the checkers over Lehman, Stone, Derrick Evans and Sharpsteen.

Next on the schedule for Outlaw Speedway is Firefighter and EMT night on Friday June 11th.