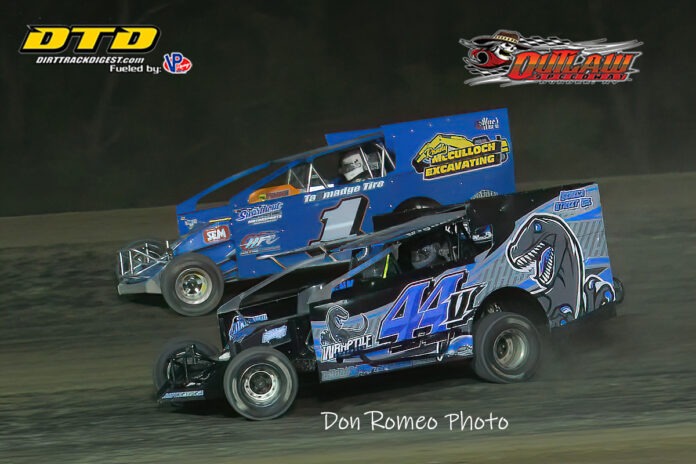 DUNDEE, NY – Outlaw Speedway owner/promoter, Tyler Siri is pleased to announce the Annual Jeff Searles Night at the track will be on Friday, June 18, 2021.

The Friendly Chrysler, Dodge, Jeep, Ram Modifieds will headline the Super 7 Show as they will be accompanied by the Lanes Yamaha 360 Sprints.  Outlaw Speedway successfully runs two Crate Sportsman Divisions most race nights including the Sunrise Insulation American Racer Tire Sportsman along with the Speed Connection DIRTcar Hoosier Tire Sportsman Classes. Also seeing action on June 18 will be the classy looking Stan’s No Tubes Street Stocks, the NAPA Hobby Stocks and rounding out the card will be the Winner’s Circle Deli Mini Stocks featuring a mix of both rear and front wheel drive 4-cylinder machines.

Both back and front gate opening times as well as ticket prices and other valuable information leading up to the event can be found at www.facebook.com/OutlawSpeedwayLLC/.

For those that cannot make the event, pay per view is available on the new Outlaw TV.  For more details on how you can subscribe go to the tracks Facebook.


Jeff Searles, who’s memory the night is dedicated was a huge fan of the popular Yates County speedway for years.  He rarely missed an event at the track and his untimely death several years ago has left a huge void at the facility.

“Jeff was a great guy, and he was a big supporter of Outlaw Speedway going back to the 1990’s, stated track owner, Tyler Siri.  He was an extremely likeable fellow that lit up the pit area with his smile and enthusiasm.  He hung out in the turn two pit area bleachers and cheered on every driver as they passed by.  It is once again with a great deal of pleasure that we have a night in Jeff’s memory.”

With the race season at the halfway point in the 2021 campaign, more and more attention is now being paid to the point standings in all seven of Outlaw Speedway’s weekly divisions.  It appears a new Track Champion will be crowned in the Friendly Chrysler, Dodge, Jeep, Ram Modified Division as Matt Sheppard and Alan Johnson have moved on opening the flood gates for a potentially first ever title holder.  Hurricane Steve Paine is the only previous Modified Track Champ at Outlaw Speedway and he currently sits solidly in the top five.  However, there are a whole slew of others poised to claim the title including the likes of Kyle Coffey, Jim LaRock, Phil Vigneri III and Bobby Varin.

It is a forgone conclusion that the Lane’s Yamaha 360 Sprints will have an inaugural champ with such notables as Paulie Colagiovanni, No Panic Davie Franek, The Juice Jared Zimbardi, Jonathan Preston and Craig Lane all in contention.  The Lane’s Yamaha 360 Sprints have been a welcome addition to the Outlaw Speedway program and no one has dominated the class thus far.

It will be a slug fest between Alex Payne and the father/son duo of AJ Potrzebowski Sr. and Jr. as to which ones will win titles in either the Sunrise Insulation American Racer Tire or the Speed Connection DIRCcar Hoosier Tire Sportsman Divisions.  However, there are a handful of competitors in each class that have plenty of time to step up their programs and walk away with track titles including Karl Comfort, Adam Hilton, Stacy Jackson, Brett Buono, lady competitor Nichole Hoag and Chris Fisher who are all in good position.

Glen Whritenour looks poised to go back-to-back in the Stan’s No Tubes Street Stock Division which would make four in the last five seasons.  However, GW does not have to look very hard over his shoulder to find a whole bunch of heavy weights lurking including the likes of veteran wheelman, Gene Sharpsteen, the very consistent Aksel Jensen, local favorite Jared Hill and Adam Depuy.

In the Winner’s Circle Deli Mini Stocks last year Jeremy Bunn walked away with the Track Championship.  Thus far in 2021 he is nowhere to be found perhaps taking a year off which leaves the door wide open for a new champ.  Scott Lehman has plenty of experience, but Kenneth Evans has been a dominating force thus far winning multiple feature events.  Mike Stone, the 2017 Mini Stock Track Champion looks like the Mike Stone of old after a few years of nothing but struggles and he is right in the mix. The Big Man in the X Car, Rich Sharpsteen is also within striking distance as both he and Sammy Fuller still have plenty of weeks to play catch up.

Last but certainly not least the NAPA sponsored Hobby Stock Division finds Justin Eldredge looking like a world beater in the first half of the season.  He has won a lot and probably could have won more if not for a few bad breaks.  But Marc Minutolo (MM) is right in the thick of things and he has won previous titles in the division for good reason; the guy is good, and his equipment is dependable making it a tough combination.  Eldredge does not appear to be the kind of guy to buckle under pressure so this one will go down to the double point season finale.  Last year’s Rookie of the Year, Joshua Oles has won an event and is right there as is Brian Lloyd and Jamie Eldredge Jr.  Unless something miraculous happens, 2020 champ, Wayne Ellison will not repeat as an early season flip tore up his new machine and with it any hopes going back-to-back.  Ellison was a great representative of the division and had sharp, top notch equipment and his presence is sorely missed by both fellow drivers and fans alike.

For a complete look at the current points as well as other valuable information regarding the track including the complete 2021 schedule of events, rules, sponsors and track contacts log on at www.outlawspeedwayllc.com.

The Outlaw Speedway is located on Rt. 14a, Dundee, NY.  Right in the heart of the Finger Lakes Region of Upstate, NY and just a short drive from Watkins Glen, Penn Yan and Hammondsport.