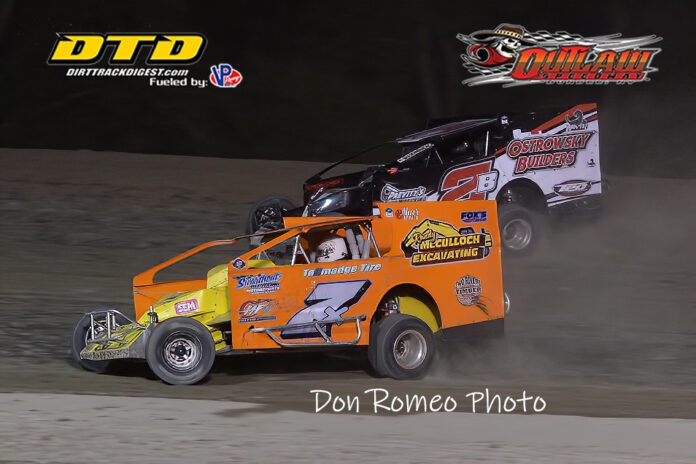 Paine started the feature event in 11th position and after 4 weeks of having a tight race car, found the winning combination. “We went through every inch of the car to loosen it up today and it paid off,” Paine said in Victory Lane. Ron Cartwright rebounded from a couple of weeks of crashes to take the second spot in the 30-lap contest, with the trio of Siri racing machines completing the top five with Danny Johnson third, Tyler Siri fourth, and Bobby Varin fifth. Point leader Kyle Coffey snagged the sixth spot, with Billy Paine, Derrick Podsiadlo, Brady Fultz, and Jeff Daugherty rounding out the top ten.

In the Lane’s Yamaha Sprint car feature, Paulie Colagiovanni again proved to be the man to beat, opening up a lead of just over five seconds in his win in the division. Dave Franek and Jared Zimbardi battled for second, with Franek grabbing the runnerup spot by seven tenths of a second at the line. Following Zimbardi across the line in third were Johnathan Preston and Kyle Drum.

AJ Lloyd and Ajay Potrzebowski battled hard in the final laps of the Speed Connection Hoosier Tire Sportsman 25-lap main event, with Lloyd notching the win by a scant margin of .145 seconds. Brandon Butler and Brett Ayers had their best finishes of the season in third and fourth, with Steve Gray rounding out the top five. Point leader Alex Payne had a rough night, finishing 13th after completing just seven laps of the feature event.

Payne, also the point leader in the Sunrise Insulation American Racer Tire Sportsman class, borrowed a ride from Tim Guild to run in that feature event after a wreck in his heat race. AJ Potrzebowski Sr, who had a massive crash weeks ago on the backstretch, started in the 6th spot and methodically worked his way to the front of the field to take an inspiring win. Kreg Crooker came from 19th in the field to take the second spot with Tommy Paine earning a third. Alex Payne brought his borrowed ride home for a 4th place finish, while former track champ Karl Comfort took the fifth spot.

Glenn Whritenour has dominated the Stan’s No Tubes Street Stock division at Outlaw in 2021, but his feature win Friday night was far from easy, as Adam Depuy fought Whritenour hard for the win. Whritenour made the winning move just a couple of laps from the finish to take another victory, with Gene Sharpsteen, Jared Hill, and Zach Teed following them across the line.

In the Winner’s Circle Deli 4 Cylinder class, Scott Lehman and Kenneth Evans pulled away from the field in the middle stages of the feature, leaving Jayson Smart to battle for the third spot with Derrick Puryear. Lehman extended his lead over Evans in the final laps and scored his second win of the year, with Evans, Smart, Puryear, and Cody Morehouse as the top five finishers.

The Marion Decker Agency Hobby Stock feature saw a familiar face return to the winners circle, with Marc Minutolo staving off challenges from Willy Easling for the win in their 20-lap feature. Brian Lloyd took third, with Jamie Eldridge Jr and Justin Eldridge rounding out the top five.

Next Friday night is the return of the amazing Fireworks Spectacular at Outlaw Speedway as part of the regular Super 7 Show. Fans will be treated to one of the best fireworks shows in the area, featuring awesome ground displays and huge aerial displays, as well as a full night of racing action. Racing will begin at 7:30 p.m. For more information, visit www.outlawspeedwayllc.com