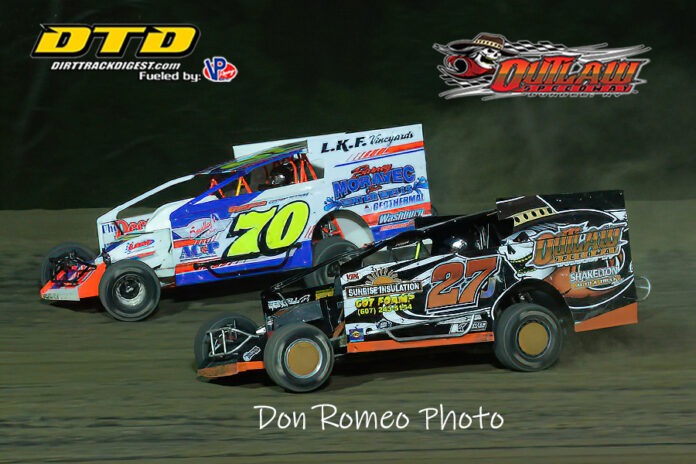 DUNDEE, NY – A great crowd turned out for the annual Outlaw Speedway Fireworks Spectacular and there were plenty of fireworks to celebrate both on, and off the track.

The Friendly Dodge, Chrysler, Jeep & Ram Modifieds rolled out for their 30-lap affair and put on a show that longtime dirt modified fans would have appreciated. Elmira’s Jeffery Daugherty led the field to Ray Kennerup’s green flags with fellow Southern Tier pilot Eric Williams flanking to the outside pole.

Daugherty took the early advantage for laps 1 and 2 while the onslaught was going down behind him for second place on back. Dundee’s Brady Fultz has had a troubling season thus far but on this night the Barney Moravec Water Wells No. 70 was a rocketship- taking the lead from Daugherty on Lap 3.

A yellow flag on Lap 18 with just twelve laps to go changed the whole game and revealed who had made what choices on tires. Fultz’ ride seemed to fade after the tires cooled down on the yellow and “The Doctor” Danny Johnson roared past to take the lead officially on Lap 19. But the race was far from over as “The Hurricane” Steve Paine started to close the gap and got alongside Johnson for the lead on Lap 24.

Paine officially took the top spot on the leaderboard at the Lap 25 mark with 5 to go and just before another yellow flag slowed the field. On the restart Paine utilized the inside lane, which had gotten him the lead, but Johnson used the momentum and his Billy The Kid powerplant to sweep around the outside to lead Lap 26 and cruise the rest of the way home to the victory. Paine, Bobby Varin, Fultz and Daugherty completed the top five.


Point leader Kyle Coffey suffered damage after contact with Varin in Turn 2 late in the race. He would recover to an 11th place finish at the checkered flag.

After taking a whale of a ride a month and a half ago, Ajay Potrzebowski Sr. has been on a tear with a new race car in the AMP General Contracting No. 72. Potrzebowski Sr. battled for the win in the Sunrise Insulation American Racer tire Sportsman division with Stacey Jackson and Justice Mayo.

Jackson took the lead on the opening lap with Mayo claiming the top spot on Lap 2. Jackson got the advantage on an early race restart to take the lead back from the 18 machine. This allowed Potrzebowski to close in from his ninth starting spot and make it a three-car battle for the lead on Laps 6 and 7. But Mayo would sweep around both the veterans in Turn 4 to lead Lap 7 and take control of the race and open a comfortable margin.

But as the race wound down, Potrzebowski pinned his Fastline Performance 72 ride to the bottom and start closing the gap on Mayo in a hurry. Lap 18 saw Potrzebowski throw a huge slider for the race lead, complete the pass and continued on to victory and a rousing applause from the crowd in Outlaw Victory Lane. Brian Fish and Alex Payne took podium spots late in the going, bringing Chris Fisher with them in fourth and Mayo completing the top five.

The late Sportsman card featured the Speed Connection Sportsman feature with Alex Payne again taking another win in his Friendly Dodge, Castrol Oil, Emerson Oil Company No. 70a. It wasn’t an easy task though as Payne had to come from the eighth starting spot and worked his way to the runnerup spot by lap 10. From there, Payne went to work on early race leader Blake Parsons’ No. 55 who led the opening eleven laps of the event.

Payne was working the “Payne with a Y Lane” on the outside rim of the track, but his iRacing buddy Ajay Potrzebowski Jr. was trying to make a late race charge. Potrzebowski had an opportunity on a late race restart, but Payne won the race to the front on this night and would have the preferred groove on the outside to secure the victory.

The Stan’s No Tubes Street Stock feature is one that many will be discussing for weeks and months to come. In front of a big crowd on fireworks night- Glenn Whritenour and Dylan Cecce proved that fireworks were meant for the night skies and the racetrack. Dundee’s Jared Hill and his Creekside Racing No. 93 led the opening lap by .006 seconds but would have company quick as Whritenour was able to execute a well-timed slider to take the top spot on Lap 4.

Cecce started sixth in the George Miller-owned No. 77 and would mount a challenge to Hill and Whritenour for the lead just before the halfway mark. Cecce would try to make an outside move on Whritenour going into Turn 3, but the two would make contact and Cecce would spin off of Turns 3 and 4. Cecce took exception to the contact and would make a fast climb back through the field.

When Cecce got back to second place and the Team 15 machine in sight, the fans got to see some real-life fireworks pan out on Tyler Siri’s fast four-tenths mile. Cecce immediately went to slidejobs on Whritenour for the race lead, with Whritenour perfectly pulling off crossover moves each time. But on Lap 10 at the halfway mark, Cecce dove into Turns 3 and 4 hard, appeared to clear Whritenour momentarily but Whritenour had a huge momentum run and the two made contact in Turn 4.

The damage to Writenour’s 15 was terminal. Cecce again had to go to the back with heavy cosmetic damage and handing the lead back to Hill. Hill would lead laps 10 through 16 while Cecce was working his way back to the front for the second time in this event. Cecce was able to slip by Hill in slower traffic to secure the top spot for good on Lap 17.

Cecce was greeted to mostly cheers and a few boos mixed in after a rather crazy and entertaining feature go.

Marc Minutolo dominated the NAPA Auto Parts Hobby Stock feature in an event that went green to checkered for their 15-lap feature. The Hobby Stocks were a little light on cars with Minutolo beating out Bruce Kinner, Nate Kriner and Brian Lloyd.

Jayson Smart won his first race in quite some time in the Winner’s Circle Deli 4 Cylinders in a great battle with Scott Lehman Sr. Brian “Corky” Grant took the lead from the pole position to lead the opening three laps. Lehman Sr. took over the top spot on the top shelf on Lap 4.

But late in the race with Smart closing in fast, Lehman’s motor started laying down with speculation being that he dropped a cylinder late in the going. Smart was able to navigate his way by and win a drag race to the start finish line to complete Lap 18. From there Smart drove away to his first Outlaw win of the season over a struggling Lehman 6x, Matt Irwin who debuted a new powerplant, point leader Kenneth Evans who overcame a flat tire earlier in the race and Mike Stone completing the top five.

Next on the schedule for Outlaw Speedway is a Super 7 Show plus 1-on-1 Spectator Races on Friday July 17th.