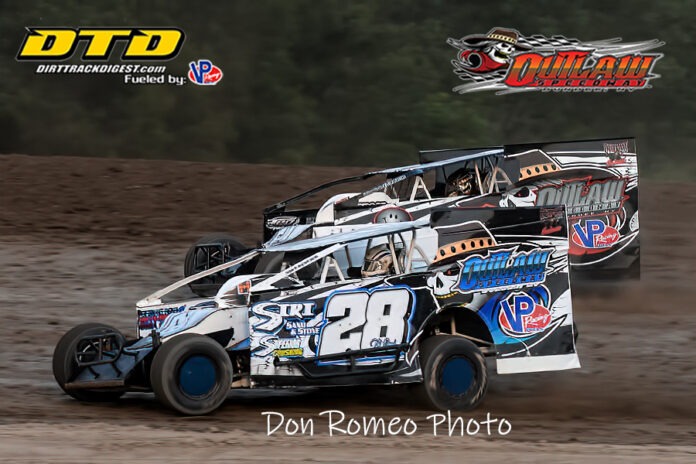 DUNDEE, NY – Bobby Varin outlasted challenges from Danny Johnson and Phil Vigneri III to take the win in Friday night’s Friendly Chrysler Dodge Jeep Ram Modified feature at Outlaw Speedway. Varin’s first win of the year was not an easy one, as he was able to hold off “The Doctor” in the closing laps after Johnson made a late race charge into the top five. Vigneri III chased Johnson to the line to take third at the checkers, with Kyle Coffey and Steve Paine rounding out the top five.

There was a first time winner in the Speed Conncection Hoosier Tire Sportsman 25-lap feature. Andrew Jacobsen took his first ever win in the Sportsman class, outdueling Adam Hilton to take the top spot. Alex Payne came through for third, followed by Nichole Hoag and Brett Buono.

Alex Payne’s win in the Sunrise Insulation American Racer Tire Sportsman was an adventure. Payne wound up having to pit early in the race to change a flat tire, but roared his way back through the pack and took another win in the division over the duo of Kreg and Carter Crooker. Chris Fisher and Ben Feldman were fourth and fifth in the contest.

A stellar field of Stan’s No Tubes Street Stocks were on hand for Friday night’s show, but the end result was similar to previous week’s action. Glenn Whritenour started 19th in the 20 car field and found his way to the front, but was severely challenged by Adam Depuy in a great battle over the closing laps. At the checkers, Whritenour once again emerged victorious, with Depuy right behind in second. Jared Hill, Dennis Cummings, and Gene Balmer finished behind the lead duo.

The Winners Circle Deli 4 Cylinder division produced a new winner Friday night in the form of Brian Grant. Grant held off Brian Avery in an intense early race battle and pulled away late for the win, with Avery settling for second. Former track champ Mike Stone finished third, with Kenny Hunt and Rich Sharpsteen rounding out the top five.

In a back-to-front drive, Marc Minutolo used the outside lane of the track to come from worst to first to take another feature in the NAPA Hobby Stocks. Minutolo was able to distance himself from Jason Rhodes in the late stages to seal the deal, with Rhodes snagging the second spot. Shawn Lloyd, Brian Lloyd, and Nathan Krinner completed the top five spots.

Racing continues with the ‘Summer Nationals’ on tap at Outlaw Speedway this weekend. For event details and times, visit www.outlawspeedwayllc.com .