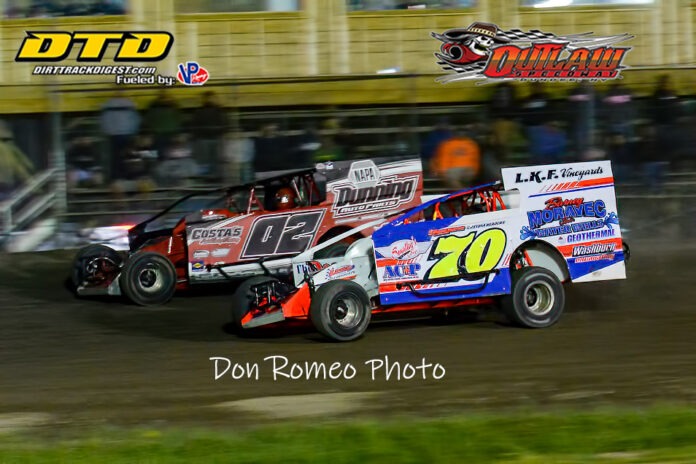 (DUNDEE, NY) – The last time Cory Costa won the Outlaw Speedway Summer Nationals- he won it in dominant fashion. The Dunning NAPA Auto Parts No. 02 wasn’t even in the same zip code as the rest of the field. But on a picture-perfect Dundee night in 2021- Costa had to earn his second Summer Nationals victory.

Mother Nature and Steve Kent watching from above blessed fans and drivers with beautiful weather for not only the Summer Nationals but a night in memory of the former driver, car owner and even bigger fan.

Costa launched into the lead from the pole starting position to lead the opening lap. But to say that Costa just cruised away after starting on the hammer would be a strong overstatement. Costa’s first foe came in the form of Dundee’s Brady Fultz who has had great speed early in the last several Friendly Dodge, Chrysler, Jeep and Ram A-Main events.

Costs and Fultz battled for the first ten laps of the event before Fultz started getting a knock on the back door from Bobby Varin and title contender Kyle Coffey. By the halfway point, Costa had opened up 5 car lengths over the hotly contested battle for the runner up spot.

With eleven laps remaining Varin closed in on Costa close enough to start an epic two-lap battle with each pulling sliders on the other corner after corner. But with seven circuits remaining it was Costa who cleared slower traffic a half a step faster than Varin which broke Varin’s momentum and took the slider line option away.

Varin still tried valiantly to pull up alongside Costa on laps 26, 27 and 28 but Costa had the preferred groove up top to not only keep the lead but secure the win. Varin was second, Fultz beat Jim LaRock in a drag race to the line for third and fourth, with Kyle Coffey keeping championship hopes alive with fifth.

“(Varin) put the pressure on me there with 10 to go and I couldn’t make a mistake- what a race,” said a jubilant Costa who bagged a cool $3,066 for the victory.

Costa noted a restart, that ended up coming back due to an accident and yellow flag, which almost impacted his ability to win. “Brady got me on that one restart and I thought it was all over. But the yellow came out and saved us. What a break. This is our biggest win of the year for sure.”

The night at Outlaw had an extra dose of excitement on Friday as the ULMS Super Late Models joined the Super 6 Show with a combined field of 19 cars made up of Super Lates and Crate Lates. Dave Hess Jr. slayed the ULMS dragon that is Max Blair for his second win of the season on their North tour. Bryce Davis put on a charge through the Top 5 at the end but came up short to finish second. Blair, Greg Oakes and Chad Homan completed the Top 5.

Steve Kent Memorial Night with the Summer Nationals quickly became a landmark night for young Carter Crooker out of Savona, NY as he would put an absolute shellacking on the Sunrise Insulation American Racer Sportsman field to score his first career open-wheel victory.

Steve Davis took the early race lead from the pole working the extreme outside lane. Davis rode the cushion to lead the opening three laps. But while Davis was setting the pace up top, Crooker was taking a page out of Steve Paine’s book just rolling the bottom lane in the one car wide moisture strip along the tires.

Crooker kept at it and took over the lead with a power run off the bottom of Turn 4 on lap 4. While Crooker led the field it was Ajay Potrzebowski Jr., fresh off a Bridgeport Top 5 with the Short Track Super Series, who started making runs at Davis for the runner up spot.

A mid-race caution and restart saw Davis have an opportunity to try and sweep around Crooker on the top lane, but Crooker was able to migrate to the cushion and not only hold his lead but extend that lead. Point leader Alex Payne made a charge through the field from eleventh to fifth by lap 15 and would finish there by lap 25.

Out front though it was the former Outlaw Speedway Bandit champion, Woodhull Warrior champion and Woodhull Mini Stock champion who would lock down his first career win in a Sportsman Modified. A big, big night for a family and crew that has continued to successfully double down on this young man’s career. Dreams do come true.

As good as the AR Sportsman feature was, the same could not be said for the Speed Connection Hoosier Sportsman division. Yellow fever plagued this 25-lap Feature which was shortened to 20 laps due to length of race and an impending curfew. Zac McDonald crossed the line in first but post-race tech inspection would find that the No. 51A rev box was still set at 6200RPM from the AR Sportsman Feature. A simple mistake to make running both classes, but a violation of the DIRTcar Hoosier rules nonetheless.

Glenn Whritenour won the Stan’s No Tubes Street Stock Feature after a great race that saw four different lead changes among four different drivers. CJ Guererri set the pace early in his Ontario Concrete, Damick Painting, Junie’s Cupcakes No. CJ1 and would lead the opening six laps of the event.

The team and car on the move though was a recent pairing- George Miller Jr. who turned the keys of his potent No. 77 over to Shane Wolfe. A perennial favorite in Outlaw’s annual Street Stock 100, Wolfe found his way from his twelfth starting spot to take the lead away from Guererri on Lap 7. Not long after though, Adam Depuy in the Jim and Sharon Schuyler-owned No. 57J made his own bid for the top spot.

Depuy crossed the line first on Lap 9, before a nifty move by Wolfe showed the 77 car back ahead on Lap 10. While they swapped the lead it was Whritenour who played ‘snake in the weeds’ in this event- slowly climbing from eleventh to second on Lap 10 when Depuy broke and went pitside.

With Whritenour in second and the handling starting to go away on the Wolfe 77, the Outlaw Street Stock dominator picked his spots and claimed the lead for good on Lap 14. Whritenour shared great memories of Steve Kent in victory lane- a division Kent owned and fielded cars for in the years before his passing.

In another great story from Friday night’s Summer Nationals- the elder statesman of the Winner’s Circle Deli 4-Cylinders took down just his second Outlaw Speedway win. The thing about that second win though- it comes as a second win in a row. Brian “Corky” Grant took home a $1,066 victory by outlasting an extremely fast Brad Whiteside in his Front Wheel Drive No. 46.

Whiteside had the speed, but the front wheel drive was not an advantage as Whiteside just couldn’t glide into the entry of the corners like Grant could in his Ford Mustang. Grant cruised home by nearly a full second for his second-straight win which was only removed about a month and a half from his barrel roll off Turn 3 in June.

The NAPA Auto Parts Hobby Stocks were last on the schedule and raced 15 Laps for their Summer Nationals Feature. Rich Sharpsteen, father of 4-Cylinder competitor Richie Sharpsteen, would wheel a 2003 chassis to the victory over a visiting Jason Rhodes and point leader Marc Minutolo.

It was a rather emotional victory for Sharpsteen. This checkered flag was taken in a car formerly owned by his father who passed away earlier this year. A very touching moment that capped off a full plate of racing just before the stroke of curfew.

Next on the schedule for Outlaw Speedway is NASCAR Night sponsored by Lanes Yamaga on Friday August 6th. The Patriot Sprint Tour will join a Super 7 Spectacular on the “Fast Four-Tenths Mile.”