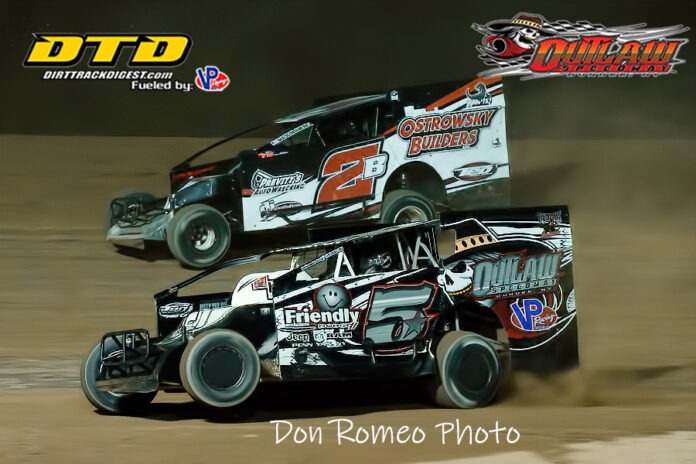 DUNDEE, NY – The closest point battle at Outlaw Speedway is in the premier division- the Friendly Dodge, Chrysler, Ram & Jeep Modifieds. Steve Paine brought a five-point margin into the night over Bobby Varin, but it was Kyle Coffey who came into the night 33 points in arears that would be making the most noise on this night.

Ron Cartwright Jr. led the field to Raymond Kennerup’s double green flags and would eventually win a tight battle with Greg Birosh to establish as the early race leader. Coffey wasted no time moving up from his sixth starting spot to find himself in second to Cartwright.

The extreme bottom held on to wet and damp conditions as the Fall night temperatures dropped into the mid-50’s, requiring Coffey to tip toe around the bottom as Cartwright was making hay in the middle and top grooves. Coffey would eventually find just enough room to squeeze under the Ostrowsky Builders 2B entering Turn 3 and wrestling the lead away before the halfway mark of the 30-lapper.

Dundee’s Brady Fultz started fifth on the starting grid and was letting his Big Block powerplant eat on a fast, heavy surface to pull alongside Coffey for a mid-race restart. Fultz got a great jump on Coffey on that restart and took over the race lead and put 4 car lengths on Coffey in the process.

Fultz was using an aggressive cushion up top to perfection but Coffey started to find traction down low along the bottom of the racetrack with 6 laps to go. Coffey pulled a wheel up alongside Fultz with 6 laps to go, 5 laps to go and then finally got a run on Lap 26 as they were getting ready to put 27 on the leaderboard.

Coffey threw a huge slider going into Turn 3, completed it cleanly and opened the door for Fultz to pull a crossover off Turn 4. Fultz was alongside down the frontstretch and that was as close as he could get as Coffey ripped the cushion through Turns 1 & 2 to take the lead for good.

The Caledonia, NY pilot took down his third feature win of the season and brought his team back into contention- now trailing Paine by only 23 points going into double point championship night next weekend.

“I kept getting a run on him (Fultz) and said if I’m going to make this move I have to do it now,” said Coffey post-race.

“I’m just happy to get us another win and at least give us a fighting chance at this championship going into next week. These guys are tough here.”

Fultz made a valiant effort but would have to settle for the runner up spot. “The Hurricane” Steve Paine was the biggest rally of the night though. After not qualifying for his handicap starting spot in the heat, Paine charged from his fifteenth starting position to third at the checkered flag. An effort that his team may look back on and realize could be the difference in winning or not winning the title next week.

Bobby Varin kept Paine in sight though, only losing 2 points to Paine by finishing fourth. The deficit will officially be 7 points, which is nothing on double points night. If Varin finishes 1st or 2nd next week and finishes ahead of Paine- Varin could claim the title by 1 point. Tyler Siri charged as hard as Paine did- starting thirteenth and coming home with a fifth place finish.

Dale Welty had to use patience to claim victory in the Sunrise Insulation American Racer Sportsman make up feature- but secured his first Outlaw victory of the season with a failing brake system. Welty had to battle alongside Reese Hackett who led the race early to eventually take the lead and the win.

With double features on tap for the A/R Sportsman and there only being three point shows remaining- many eyes were upon both Alex Payne, Chris Fisher and Karl Comfort. They will be the three drivers who will decide the championship next weekend with double points on the line.

Fisher drove his way from the eighth starting position to advance to third, following Hackett across the line. Justice Mayo started fourth and finished fourth, while point leader Payne kept Fisher within eyeshot to round out the Top 5.

The nightcap for the Sunrise Insulation American Racer Sportsman was taken by Kreg Crooker who had an incredible week. Crooker pairing his first Outlaw win of the season Friday with a win he took down Tuesday night at Thunder Mountain Speedway with the Short Track Super Series Sportsman.

It wasn’t that easy though as the Dependable Disposal No. 51 driven by Crooker had to wrestle the lead away from polesitter and early race leader Brandon Butler. Butler, who struggled in the make up feature to start the night, made the right adjustments during intermission and had a stout Hilliard Corporation No. 16 for the nightcap.

With 10 laps to go, Alex Payne made his way to second place and began working the cushion to try and close in on Crooker. Fisher was in two as well, but Crooker was lights out working the bottom of the track as Payne just couldn’t find the happy medium around a treacherous outside berm.

Loren Lincoln made a fine comeback after getting into a mid-race jingle to finish fourth with Brian Fish completing the Top 5.

Three drivers will decide the Speed Connection Hoosier Tire Sportsman track title next weekend. Ajay Potrzebowski Jr. has a healthy lead in that race and took care of business Friday with a runner up finish as he raced in the tire tracks of race winner Alex Payne who locked down Outlaw win number nine and Hoosier Tire win number four.

Payne started fifth, right in front of Potrzebowski Jr., and these two drivers sliced their way up through the pack to take the lead from Brandon Butler and Bryan Rhoads. In the Hoosier division, Payne was able to make the cushion work in keeping his momentum built up and fend off all challenges down low from Potrzebowski. They would lead Butler, third place point contender AJ Lloyd and Blake Parsons across the line under Raymond Kennerup’s checkered flag.

Glenn Whritenour is attempting to start another win streak in the Stan’s No Tubes Street Stocks with his tenth feature win on Friday night. Whritenour has streaks of four wins, three wins and now two wins, following a race in which he started seventh and took the lead just prior to a caution on Lap 3.

The win also sewed up the 2021 championship for Whritenour as he carries a 110 point lead into double point championship night where only a potential 80 points can be gained if a full field of cars were present.

Chuck Winslow, Jared Hill, Aaron Miller and Gene Sharpsteen held a spirited battle for the runner up spot. Sharpsteen broke a trailing arm which then went on a destruction path that cleaned out the driveshaft and spit it out onto the racing surface, ending his night. Hill was battling Sharpsteen before the mechanical failure, hit the wet clay in Turn 1 and shot up the track allowing Winslow and Miller to get by.

The Top 5 at race’s end was Whritenour, Winslow, Miller, Hill and Zach Teed.

After not winning a single NAPA Auto Parts Hobby Stock feature until the last race in June, “Mr. Smooth” Marc Minutolo has fired off seven wins in eight races following his win Friday night. Second place was not the place to be in while drivers tried to contend with Minutolo for the win.

Brian Lloyd suffered a failure in the front end while negotiating the tricky cushion in Turns 3 and 4 chasing Minutolo, ending his night on the hook. Willy Easling suffered the same fate with less than 5 laps to go in nearly the same spot on the track. Easling was definitely making a race of it too- throwing caution to the wind as he slammed his No. 28 into the heavy cushion lap after lap. Ultimately, the car just said no more.

Minutolo would win the battle of attrition as he would lead Glen Vancise and Bob Buono across the line. With a 92 point advantage over Lloyd, Minutolo will be the 2021 Hobby Stock champion following the win this past weekend.

Don’t let anyone try and tell Brian “Corky” Grant that your racing prime starts in your 20’s and 30’s. Cruising into retirement age, Grant has made 2021 his best season in his long racing career. With a brand new racecar that has been on it’s lid already this season- Grant has been taking the Winner’s Circle Deli 4-Cylinder field to the woodshed this Summer.

Since July 23, Grant has now won five out of six feature races at Outlaw. Grant locked down his first career win at Outlaw on that Summer night in late July and hasn’t looked back since. Friday night’s foe was front wheel drive competitor Kenny Hunt who has wins of his own behind the wheel of a rear wheel drive 4-Cylinder.

Hunt led the opening seven laps of the race but was no match for the superb handling of Grant’s Ford Mustang rear-wheel drive No. 46. Plans called for the younger of the Brian Grant’s to take the wheel this Fall- but Junior may have to use a crowbar to get “Corky” out of the car now.

Next on the schedule for Outlaw Speedway is Double Points Championship Night on Friday September 10th. A thrilling show featuring the Modifieds, 360 Sprint Cars, Sportsman, Street Stocks, Hobby Stocks and 4-Cylinders will fill the card at the “Fast Four-Tenths Mile.”