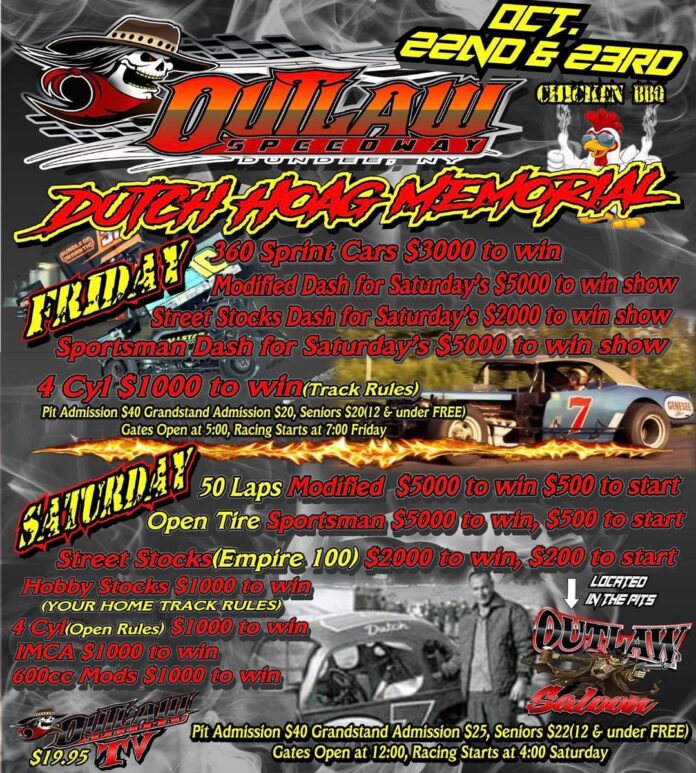 “Dutch Hoag was such an influential driver in this region that it is imperative that we keep his name alive here at Outlaw Speedway. Many of us were just kids or not even born yet when Dutch was racing and winning virtually everywhere in New York State. In the mid 50’s thru the early 1970’s he was a household name in northeast modified racing circles and with his notoriety, he put upstate New York on the map as a hub for the open wheel Modifieds. He had a massive fan base and was truly a gifted wheelman and it is with a great deal of pleasure that we once again honor this special man with our season ending event.” That according to Outlaw Speedway owner, Tyler Siri.

It should be noted that “The Ole’ Master”, Dutch Hoag was the five-time winner of the prestigious Race of Champions event at the Langhorne Speedway just outside of Philadelphia, Pa. Three times on dirt and twice after the circular mile was paved showing his diversification on both clay and blacktop.

Siri purchased the Outlaw Speedway from then owner, Dean Hoag over six years ago and immediately made the Modified Division the headline class at the track and with that honoring one of this regions all-time greats, by ending each season with the Dutch Hoag Memorial Event.

Suffering thru a dismal 2021 season that included no less than seven full rainouts as well as a generator fire which abruptly postponed the Fall Nationals in September until October 29 and 30, Siri and his crew have been hard at work making the necessary repairs to the electrical system at the track in preparation for the October 22/23 full weekend of excitement.

“The generator and subsequent electrical issues that went along with it on Friday, September 24 put us in a position of having to postpone the Friday night portion of Fall Nationals program. To make the necessary repairs to the electrical system we needed time to receive the parts and pieces. We did get all the Friday qualifying in, so we will just move the remainder of that show over to the Friday night portion of a new two-day program, the final weekend in October”.

With numerous other end of the season special events already on the books at other venues across the northeast there were no open dates to accommodate all the divisions that were on the Outlaw Speedway Fall Nationals schedule, thus the decision to run the make-ups on October 29 and 30.

With all that in mind the Dutch Hoag Memorial Weekend will go on as planned when the 2021 schedule was originally released with the Patriot Sprint Tour running a full show on Friday, October 22 paying $3,000 to win followed by Dash Qualifiers for Saturday nights action in the Friendly Chrysler Dodge, Jeep Ram Modifieds and Stan’s No Tubes Street Stocks. Also, the Sunrise Insulation American Racer Tire Sportsman along with the Speed Connection DIRTcar Hoosier Tire Sportsman will combine for a Dash for their Saturday night A Main Event. The Winner’s Circle Deli Mini Stocks will race for a $1,000 to win feature event using Outlaw Speedway rules.

One of Outlaw Speedway’s long standing marketing partners will be onboard to sponsor the Dutch Hoag Memorial Weekend. Friendly Chrysler, Dodge, Jeep, Ram located on Rt. 14a just east of Penn Yan will attach their name to the biggest weekend of the 2021 season at the popular Yates County oval.

Friendly offers a complete line of both new and quality used cars and trucks as well as a top-of-the-line parts and service departments. All the information you need is just a click away at www.friendlydodgechryslerjeep.com.

As he has done all season long, Friendly sales representative, Rodney Cole will be at the track and bring along a new Chrysler, Dodge, Jeep or Ram vehicle which will be proudly displayed at the rear of the grandstand seating area.

Gates open at 5:00 with racing at 7:00 pm for the Friday night of activity. Pit admission is $40/, Grandstand seating is priced at $20/ for adults and seniors and kids 12 and under are admitted free.

Then on Saturday, October 23 it will be an action-packed afternoon and evening as the Mighty Friendly Chrysler, Dodge, Jeep, Ram Modifieds will race for a hefty $5,000 to win, $500 to start 50 lap feature event. Likewise, the Open Tire Sportsman will run for the same $5,000 to win and $500 to start in their feature go. NAPA Hobby Stocks will run for a winner’s share of $1,000 using each competitor’s home track rules. Open rule Winner’s Circle Deli Mini Stocks will go off for $1,000 to win as will the IMCA Modifieds and the 600 cc Mods. Perhaps the most unique event of the entire weekend will be the traditional running of the Stan’s No Tubes Street Stock Empire 100. The century long grind will net the winner $2,000 with it paying $200 just to take the green.
In addition to the monster purses that will be paid in each division, lap money is also up for grabs in each feature event.

Do the math. Over the two nights of action the winners share alone totals $20,000. Huge Money when you consider this is a late season special for most of the track’s regular divisions and not that of traveling series.

Saturday gates open at Noon with racing getting underway at 4:00 pm. for the twilight event.
Pit admission is set at $40/, Grandstand seating is $25 for Adults and $20 for Seniors. Kids 12 and under are free.

If you cannot attend either night or the entire weekend Pay Per View is available on Outlaw Speedway TV for $19.95 for each race date. All the details on how you can subscribe are on the tracks Facebook.

A mouth- watering Chicken BBG will be available along with free rides on the Outlaw Speedway Monster Truck, Outlaw Crusher.

For all additional information leading up to the Dutch Hoag Memorial Weekend including any last-minute time or schedule adjustments along with any weather-related issues go to www.facebook.com/OutlawSpeedwayLLC/.

For all other information including a complete list of the 2021 Final Point ‘s for all seven of Outlaw’s weekly divisions, rules, sponsors, track contacts as well as directions to the facility log on at www.outlawspeedwayllc.com.

The Outlaw Speedway is located in Dundee, NY on RT. 14a, right in the heart of the Finger Lakes Region of Upstate New York. Just a short drive from Geneva, Seneca Falls, Penn Yan, Hammondsport and Watkins Glen.