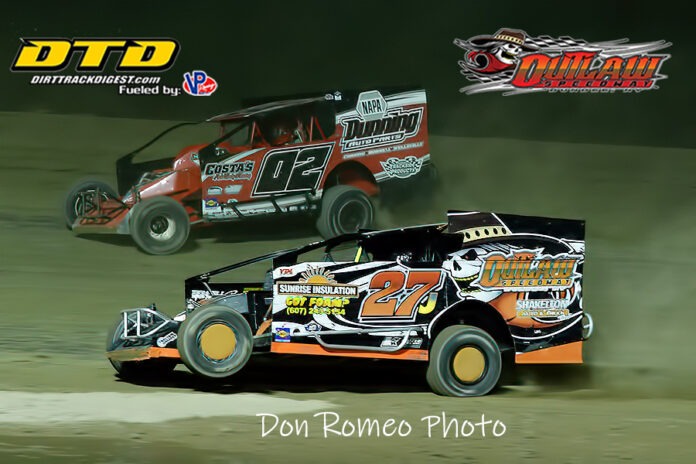 DUNDEE, NY – After a late evening generator fire that prematurely cut short the Fall Nationals at the Outlaw Speedway, the event will be made up on the weekend of Friday and Saturday, October 29 and 30.

Most of the necessary heats and dash events for the Friday portion of the 6th Annual Fall Nationals were safely in the record books prior to the power outage. The Patriot Sprint Tour 360 feature was on the track when the problems began and with the track in a situation of not being able to acquire the necessary parts and pieces to rectify the situation in a timely manner, the completion of the event was pushed back to the final weekend of October 2021.

“The generator building fire was quickly extinguished by the local Dundee VFD along with my track crew. It was due to their quick work we saved the generator and building, but the damage to the electrical system was significant so we needed time to get the necessary replacement parts to fix the problem.” That according to track owner, Tyler Siri.

The October 29-30 dates were open without any known conflicts with other venues within the region thus the choice of that weekend to pick up where the show left off.

Plans call for the Friday night portion of the show finishing off the remainder of the $4,000 to win PST 360 Sprint feature event and then step into the remainder of the originally scheduled program which will include feature events for the Sunrise Insulation American Racer Tire Sportsman paying $2,000 to win. The Stan’s No Tubes Street Stocks will race for a winner’s share of $1,500. 600 cc Mods run for $750, Winner’s Circle Deli Mini Stocks $1,000 to win. The NAPA Hobby Stocks running under the 2021 Outlaw Speedway rules package will have a complete show paying the feature winner a nifty $750.

General Grandstand rain stubs as well as Pit wrist bands from the September 24 postponement will be honored for the Friday night, October 29 event.

It is anticipated the Friday segment will be moved along in a timely manner allowing everyone in attendance an early exit allowing the track crew plenty of time to prepare for the aggressive Saturday portion of the two nigh bill.

Then on Saturday, October 30 Tyler Siri and his staff will pull the curtain on the 2021 season with a huge night of activity to cap off the year.

Siri along with teammate, Danny Johnson are already locked into the Gunslinger 50 for the Friendly Chrysler, Dodge, Jeep, Ram Modified feature event, however qualifying heats and consolations will set the remainder of the star-studded field. The winner of the half century long grind will pocket $4,000, a nice way to head into the offseason.

The Speed Connection DIRTcar Hoosier Tire Sportsman will have a complete show paying the winner $2,000. The Stan’s No Tubes Street Stocks will race for a winner’s share of $1,500 to the victor and both winners in the NAPA Hobby Stocks using home track rules as well as the open rules Winners Circle Deli Mini Stocks will each pocket $1,000.

The Saturday night leg of the weekend affair will also feature 1 on 1 Spectator Races with a winner take all of $250 for the popular event.

The entire weekend of the 6th Annual Outlaw Speedway Fall Nationals is proudly sponsored by Pepsi, the Official Drink Beverage of the Outlaw Speedway.

The Outlaw Saloon will be open both nights in the pit area serving adult beverages plus a spectacular view of the track from the roof top platform.

For those who cannot attend either or both nights, Outlaw Speedway TV Pay Per View is available each night for $19.95 with details on how you can subscribe on the tracks Facebook. Coverage includes multiple camera angles and drone footage when applicable.

Free Camping is available all weekend along with free rides on the Outlaw Speedway Monster Truck, Outlaw Crusher.

For directions to the track, contacts, sponsor information rules and much more log on at www.outlawspeedwayllc.com.

The Outlaw Speedway is on Rt. 14a in Dundee, NY, right in the heart of the Finger Lakes Region of upstate New York. Just a short drive from Geneva, Seneca Falls, Penn Yan, Bath, Hammondsport and Watkins Glen.