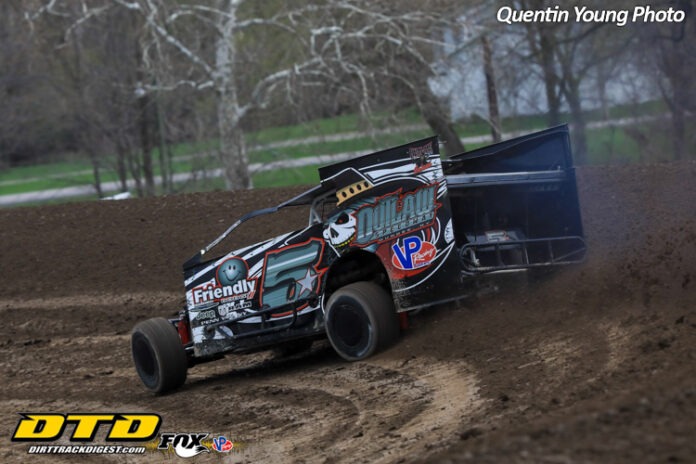 DUNDEE, NY – Tyler Siri had every reason to not be focused on his own racing efforts on Saturday at Outlaw Speedway. The sixth year owner and promoter saw Mother Nature provide early morning rain which pushed back an early afternoon start time by 90 minutes for hot laps. Only to see rain return after completing only two qualifying heat races.

Siri and the track crew went to work on the surface and would finally return to action some four and a half hours later. Extra effort was made to get the 10th Annual Dutch Hoag Memorial in the books with no real rain dates available to make the show up.

Willy Decker and Bobby Varin earned the front row starting spots by virtue of finishing Top 2 in the Dash on Friday night. Decker jumped out to the early advantage with Varin finding trouble early in the event as he entered the pit area during one of the early race yellow flags with mechanical problems on the rear of the car. Varin would return for one lap and pull off for the night.

The race would be slowed again on Lap 6 for Ron Cartwright Jr. who stopped with a puff of smoke and the No. 77 of Alan Barker who had a flat right rear tire. Decker still showed the way at the time with Siri running second and “The Doctor” Danny Johnson settled into third place.

On the restart Decker got a great jump and opened up a four-car length advantage over Siri and Johnson who were weaving and slicing around each other for the runner up position. But as they battled all attention turned to Turn 4 as Decker went up in a shower of sparks from the rear end, drawing another yellow. It was heartbreak for the veteran who had not logged a ton of laps at Outlaw but had a breakout showing in one of the track’s premier events.

The restart would see Siri pull away and seemingly hide from the rest of the pack. Meanwhile a breakout effort was being put in by Jim LaRock out of Geneva, NY. LaRock broke into the second position utilizing the bottom lane and was holding off not only Johnson, but Southern Tier driver Nick Nye and Outlaw regular Brady Fultz.

With Siri in control of the race, Johnson started making an aggressive push to get to the second spot and had to start wrestling with the tricky cushion that outlined the entire speedway. Several times Johnson thrilled the fans in attendance as he bicycled the Shakelton Auto Parts, Sunrise Insulation No. 27J. But just past the halfway mark Johnson had tackled the cushion one too many times and came up with a flat tire on the old school orange ride.

With Siri at the controls atop the leaderboard, Fultz started tackling the cushion to try and find a way by LaRock. But LaRock logged the race of his season and held off Fultz’ advances all the way to the checkered flag on Lap 30.

Out front, Siri dominated to win the 10th Annual Dutch Hoag Memorial by some 7.312 seconds over LaRock, Fultz, Nye and Billy Paine advancing from 20th to 5th place.

Ajay Potrzebowski Jr. has had a breakout season in Crate Sportsman competition in 2021. But as they have picked up some big wins this season, Saturday night the team out of Chemung, NY did something they hadn’t yet done with their young driver- pick up a $5,000 payday!

Potrzebowski Jr. made the redraw and drew the lucky pole position for the 30-Lap richest paying Sportsman race of the season at Outlaw. Outlaw’s Hoosier tire track champion would set the pace early with fellow Friday night regular Chris Fisher in tow.

But the man making heads turn on his way through the pack was the driver who won his dash on Friday night to qualify for Saturday’s redraw- Payton Talbot. Talbot had never laid eyes on Outlaw Speedway prior to Friday night and was utilizing his Bridgeport notebook to try and get a handle. Got a handle he did!

Talbot took advantage of drivers shying away from the tricky and heavy cushion by bouncing his Fastline Performance No. 14T off it to make passes to work into the Top 5 and then the Top 3. Once he got to second, Talbot quickly tracked down Potrzebowski in a bid for the lead.

The two young up and coming stars pulled away from the rest of the lead pack with Talbot making a high side move in Turn 4 to sneak by Potrzebowski for the top spot. Talbot looked like the car to beat until his car entered Turn 1 awkwardly on Lap 22, then slowing down to draw the caution. His tires were all inflated and suspension components all appeared to be in place, however Talbot called it a night one lap after the restart as something was still amiss.

This handed the lead back to Potrzebowski Jr. with a new foe ready to make a big for the big pay day. Southern Tier Sportsman and 358 Modified star Tommy Collins Jr. made a hard run at the No. 72 and looked poised to take the lead with just two laps remaining. But Potrzebowski was able to find the momentum he needed to keep fending off Collins’ top side runs.

It was the richest win of Potrzebowski’s young career for the victory, Collings logging a hard-earned second place, Phil Vigneri charging late for a third place run, Steve Davis fourth and Fisher the Top 5.

The Street Stock Empire 100 was reduced to 50 laps in consideration of time and the impending curfew. Dylan Cecce made a fast fading powerplant last with five laps to go to hold off former two-time Empire 100 winner Kurt Stebbins. It was Cecce’s second win in the most prestigious full-fender race in the state, adding him to the list of two-time winners including Cecce, Stebbins, Glenn Whritenour and Chris Fisher.

Nick Dandino and Brett Marlatt led the field to green but the race was quickly slowed with two accidents early that thinned the field and caused damage to several contenders. Speaking of trouble, the two-time and defending champion of the race Glenn Whritenour, pulled off with officially one lap on the board to the surprise of many as a favorite to win.

Marlatt led a majority of the first half of the race before pulling off track with a flat tire, ending his great run. Former 4-Cylinder master Ray Hyer took his turns at leading the Empire 50 with his best Street Stock run of 2021, he would go on to finish sixth.

With 5 laps to go, Cecce started showing heavy white smoke from the George Miller-owned No. 77. The Keystone Rail Recovery, Affordable CDL machine was overheating badly. Stebbins started applying pressure for the lead, waiting and hoping that Cecce would start to lose power. Cecce’s ride was definitely not at full song in the corners but the Woodhull, NY shoe was able to protect the bottom lane to assure that if Stebbins got by it would have to be the long way around the four-tenths-mile.

Stebbins would not get there and Cecce would walk away with the $2,000 victory. For dramatic effect, Cecce climbed from the car in a cloud of radiator steam as the powerplant under the hood had just enough to get him to Outlaw Victory Lane. Nick Dandino had his best run in the Empire 100 and best run of the season behind his No. 99 to finish third. Carpenter finished fourth and “Mr. Smooth” Marc Minutolo raced his way from fifteenth to the Top 5 at race’s end.

Justin Eldredge proved that winning at Outlaw Speedway is much like riding a bike. Eldredge won early on in the 2021 season. After stepping away from Friday night racing in June, a four-month layoff saw the familiar orange No. 25J in a place he has seen often at area tracks- in Victory Lane.

It wasn’t an easy win by any means as Eldredge stated, “we started at The Windmill tonight,” describing his twenty-first place starting position. Eldredge caught race leader Rich Sharpsteen late in the going and rode the cushion to another big win at Outlaw, sparkling white wine from Lakewood Vineyards included. Marc Minutolo, Buck Mills and Tyler Bushy rounded out the Top 5.

Larry Colton represented The Hill Speedway well in the Open 4-Cylinder feature, winning the $1,000 top prize and taking him his own bottle of bubbly. Colton battled fiercely with Rich Conte, Stan Mathews and Mike Stone for the win. It was his first win traveling up to Outlaw’s Fall season special events which his team has done for many seasons.

Mathews, Stone, Josh Collins and Tony Dickerson bested a field of 32 cars to fill out the Top 5 finishing positions.

Modified star in the Southern Tier, Ryan Jordan, hurt his Modified motor late in 2021 which sidelined him from making an attempt at running the Dutch Hoag Memorial. But a last minute call from a local 600cc Modified team gave Jordan an opportunity to race something- he made the most of it.

Jordan battled with Chuck Lohmeyer for the win in the late stages of their 15-lap feature event. The Modified shoe piloting the No. 108 on this night pulled off an impressive move in slower traffic to pass Lohmeyer with just two laps to go to secure the victory in a thrilling finish. It may not have been the Modified checkered flag he would have liked to get, but a win is a win!

The IMCA Modified feature was curfewed out and preliminary plans call for the event to be potentially added to the Saturday night portion of the Fall Nationals October 29 and 30. Stay tuned to the Outlaw Speedway Facebook page and website for more rescheduling details.

Next on the schedule for Outlaw Speedway is the completion of the Fall Nationals on October 29 and October 30 at the “Fast Four-Tenths Mile.” For more information visit the track website at www.outlawspeedwayllc.com and follow our track social media page on Facebook.