DUNDEE, NY – On of the winningest and most prolific drivers on the Central Pa, 410 Sprint Car Circuit, Danny Dietrich recently confirmed that he will see action at the Outlaw Speedway in 2022.

Dietrich or Double D as he is better known of Gettysburg, Pa. looks forward to a return engagement to the popular Yates County oval where he has previously competed in the Tony Stewart owned and promoted All Star Circuit of Champions for the 410 Sprints.

In two prior events that he has competed in at Outlaw, Dietrich has a pair of top five finishes and was in the mix for the win in both outings only to come a bit short to inaugural All Star/Outlaw 410 winner, Ryan Smith in June of 2017.  In that event Dietrich was in a slug fest with Smith, runner-up Chad Kemenah, Sammy Swindell who finished third while Dietrich claimed fourth in what many considered one of the best feature events in the history of the Outlaw Speedway.  Double D then went on to finish second to Paul McMahan who was victorious in the June 2018 All Star Circuit of Champions event at the track.

It is obvious that Dietrich likes racing at Outlaw Speedway and looks forward to his return as part of NASCAR Weekend at the track.

Track owner/promoter Tyler Siri was able to book the All-Star Circuit of Champions 410 event in conjunction with this years NASCAR event at the famed Watkins Glen Road Course just a few miles from the Dundee, NY clay oval.


“I was able to negotiate a deal with Tony Stewarts group to hold this race on the weekend of the events at Watkins.  We always get a huge crowd that night as in the past we have had some of the top names in the sport travel over from WGI and be a part of the show at Outlaw Speedway. With the 410 Sprints on the card this year I feel confident that this will be the biggest event in the history of the facility that dates back into the 1950’s.  Having Dietrich return will be a big boost as he always runs good here and who knows what drivers might just show up from NASCAR to compete in a 410 Sprint.”  That according to Tyler Siri.

According to Danny Dietrich, “We look forward to getting back on the 4/10 mile at Outlaw Speedway.  I like the configuration of the track as its wide and fast with multiple lanes.  I always like running with the All Star’s and I would love nothing more than to take home a win after a few really good finishes there in the past.”

The Outlaw Speedway will host night one of a three track New York swing on Friday, August 19.  The All Stars will then move on to the Brett Deyo promoted, Utica Rome Speedway on Saturday before wrapping up the trifecta on Sunday, August 21 at the Weedsport Speedway a venue where Dietrich previously won an All-Star Circuit of Champions Event in 2019.

“I’m really pumped about returning to New York because I have run good up there in the past, claimed Dietrich.  Utica Rome will be something new, but I have really good people behind me so, we should be able to get a handle on the place.”

Dietrich along with car owner, Gary Kauffman who owns Sandoe’s Fruit Market in Biglerville, Pa. have a long-standing driver/owner relationship accumulating hundreds of 410 Sprint Car wins and Championships on the tough Central Pa. Circuit as well as other wins in numerous states across the east coast and in the mid-west.

Double D can boast an impeccable career with over thirty-two top five finishes in previous ASCoC Events including seven trips to victory lane with the most recent coming last season at Sharon Speedway.  In addition, he has numerous feature wins in the World of Outlaw Sprint Division including the prestigious Williams Grove National Open in 2016.  Last season, Dietrich fell just shy of claiming one of the highest profile 410 Sprint Car events in the country with that being the 38th running of the Kings Royal at the Eldora Speedway.  After a spirited battle with eventual winner, Tyler Courtney, Dietrich wound up finishing second to secure a podium spot.  His best finish thus far at the famed Rossburg, Ohio speed plant.

“We had an up and down season in 2021, stated Dietrich.  We had some wins last year, (6) and a dozen runner up finishes, but it was not up to our expectations.  Way too much inconsistency which has us regrouping and going back to basics heading into the new year.”

In addition to his six trips to victory lane, Dietrich can also boast fifty-nine top ten and thirty-eight top five finishes with wins on the tough Pennsylvania circuit coming at Lincoln, Selinsgrove, BAPS and Port Royal.

The August 19, 2022 ASCoC event at the historic Outlaw Speedway will be a reunion of sorts as Tyler Siri will welcome back Danny Dietrich along with other Pa drivers and ASCoC regulars all looking to converge on the Fast 4/10 of a mile clay oval in Dundee, NY.

“I’m really excited about this event, claimed Siri.  The inaugural ASCoC event here at Outlaw was massive with so many people we had to put many in the infield. Due to scheduling conflicts, I could not book any ASCoC events in 2019 and 2021 and with all the restrictions surrounding COVID I ran just our regular classes in 2020 with no special events. Fans need to mark this on their calendar as it promises to be the biggest ever.”

Since the ASCoC last ran at Outlaw, Siri has made numerous improvements to the facility including making the racing surface even wider and faster than in years past.

For continual updates on this event and others go to www.Facebook.com/OutlawSpeedwayLLC/.

Other valuable information is available by logging in at www.outlawspeedwayllc.com.

For a closer look at the career of Danny Dietrich, along with his all-new line of apparel go to www.dannydietrich.com.  Dietrich can also be found on twitter and Facebook. 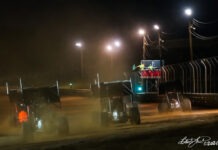