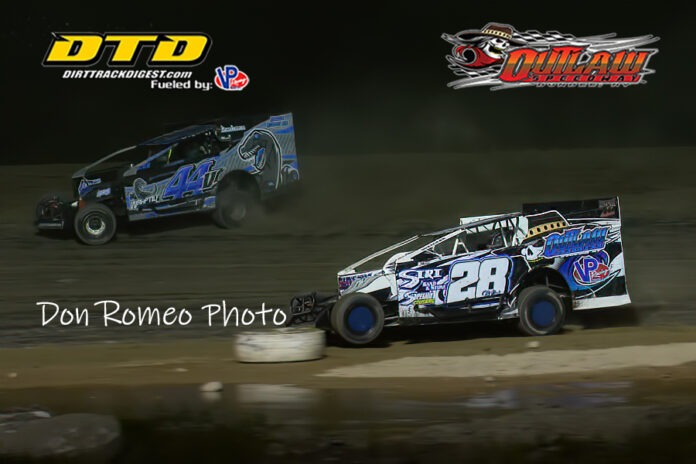 In typical Siri form, the schedule is littered with special’s starting right out of the gate with the Lucas Oil Nationals set for Saturday, April 9, 2022.  The Lucas Nationals traditionally open the regular season at the Yates County oval after a pair of practice sessions on Saturday, April 2 and Friday April 8.

The track will then come right back the following Friday, April 15 with the Cindy Lane Memorial Spring Nationals.  The next night on April 16, Outlaw will welcome racers back for the make-up of 2021 Fall National’s that was lost to Mother Nature with the event highlighted by a $4,000 to win 360 Sprint A Main along with the $4,000 to win Modified Gunslinger 50.   Tradition will once again find the Steve Kent Summer Nationals set to go on Friday, July 29 along with the two- day Fall Nationals on Friday and Saturday, September 23 and 24.

“The Spring, Summer and Fall Nationals are events that have been on the schedule since I purchased the track seven years ago, claimed Siri.  Not only do they create a lot of hype, but there is some serious money on the line for all the classes that will see competition during those particular events.  For example, as part of the Fall Nationals on September 24 and to commemorate our 65th Anniversary I will pay the Modified winner $6,500 with $650 just to start. This will get the attention of most every Modified competitor in the northeast.” That according to Siri.

Last year, The Hurricane, Steve Paine was able to finally secure a win in the Short Track Super Series and this season Paine will look to back up his popular victory as the high profile STSS will make May 17 the tracks only mid-week show of the 2022 campaign.

Rain and Covid 19 protocol have silenced the Gary Montgomery Memorial over the past several seasons, however both Siri and RUSH Crate Late Model Series promoter, Vicki Emig are in hopes that this year’s event will go off as scheduled on Friday, May 27.  This show will help kick off the first official holiday weekend of the year.

Fireworks have always played a big part in Siri’s schedule of events and 2022 will be the best yet as some $20,000 in pyrotechnics will be touched off making Outlaw Speedway’s Fireworks Extravaganza the largest in the Finger Lakes Region of Upstate, NY. and perhaps the biggest in the northeast.  Friday, July 1 is the date and fans should plan to come early for this one.

The Ted Siri Memorial set for Friday night, August 19 could well be the largest attended event in the 65- year history of the popular Dundee, NY face facility as the Tony Stewart led Flo Racing All Star Circuit of Champions 410 Sprint Car Series will invade the track in conjunction with NASCAR Night.

“With the recent passing of my dad I immediately went to work putting this show together.  My father was the tracks biggest fan, and he will be sorely missed by everyone who knew him.  With the 410 All Star Sprint’s on the card coupled with some NASCAR stars that traditionally make the short drive over from Watkins Glen International, this event could well surpass the record-breaking crowd we had when the All Stars made their first appearance several years ago.  If the stars align properly for this show it has the potential of breaking all attendance records.”  That once again according to track owner, Tyle Siri.

Another event that has been a mainstay at the track is the season ending Dutch Hoag Memorial Weekend this year scheduled for October 21 and 22.  This event generally has no competition from other venues allowing racers from all parts of the region the opportunity to compete as numerous different classes will be a part of the two-day affair.  Four seasons ago some four hundred-fifty machines saw competition during Dutch Hoag Weekend breaking all car count records at the popular Yates County NY Facility.

Siri stated that, “As part of this year’s Dutch Hoag Memorial I am running an Open Tire Sportsman Spectacular paying $5,000 to win and $500 to start.  The 602 Sportsman hardly race anywhere for that kind of money so with those kind of numbers we will get a huge turnout from all over the northeast.”

Additional unique events that will be staged throughout the 2022 season include the Roy Silvers Memorial on April 22, Mike Jackson Memorial on May 13, Jeff Searles Memorial set for June 10 along with the Gene Dupuy Memorial Event on August 5.

Other groups honored will be Boy and Girl Scout Organizations, Little League, Active Duty, Mother’s Day, EMS and Firefighters, along with the American Legion.

Mid-Season races will go off on Friday, June 17 with the Double Point Season Championship night on September 2, 2022.

The ULMS Super Late Models will return to Outlaw after a successful run 2021 with their one- off event slated for Friday, July 29 as part of the Summer Nationals.  The CRSA Sprints have been booked for a show on June 10 and no less than a pair of one-on-one Spectator Races are on the 2022 schedule.

Also adding to the excitement will be King of the Ring Events for all weekly classes.  The single elimination one on one specials will have fans on the edge of their seats as all bets are off when the drivers take to the speedway in these winner take all shoot outs!

New for 2022 and according to many drivers a much welcome relief will be “Nights Off “on three separate occasions with the track being silent on May 20, July 22 and August 26.  With the anticipated massive increases in the cost of racing including tires, racing fuel, bolt on components, engine parts coupled with the price of gas at the pump race teams will be stretched to the limit in 2022.  With the track lying dormant on those three nights, it will allow teams to take a well- deserved break and regroup.

The Friendly Chrysler, Dodge, Jeep, Ram Modifieds will again headline the Regular Super 7 Show along with the Sunrise Insulation American Racer and Speed Connection DIRTcar Hoosier Tire 602 Crate Sportsman Divisions.  Stan’s No Tubes will return to sponsor the classy looking Street Stock’s and the NAPA Stores in Addison, Corning, Hornell and Wellsville will be back for their second season in supporting the Hobby Stock Class.  Locally owned Winner’s Circle Deli will be right there to sponsor the Mighty Four Cylinder Mini Stock’s.  All new for 2022 will be the Swarthout Recycling 600cc Modifieds which have replaced the 360 Sprints as they will return to their pre-Covid Pandemic touring schedules.  However, the Wonder Winged 360 Sprints will see action on the Fast 4/10 of a mile clay oval at Outlaw on numerous occasions including the Spring, Summer and Fall Nationals, Dutch Hoag Memorial Weekend as well as being added to the Short Track Super Series card on May 17.

Added to the card after a one- year hiatus will be the return of the Youth Bandit Division where youngsters can run in 4-cylinder Mini Stocks in advancing their careers.  To protect the youngster’s amateur status, they will run for trophies and certificates presented by all new sponsor, Fritz Masonry.

It all gets started on March 19 and 20 as Lane’s Yamaha presents the Annual Outlaw Speedway Arnot Mall Car Show in Big Flats, NY and after just a one week respite the track officially swings the gates for Open Practice on April 2 and 8.  From there it’s all hands-on deck for what promises to be the most aggressive schedule of events ever put together in the 65- year history of the Outlaw Speedway.

Two new projects that Tyler Siri instituted last year will return in 2022 including the Outlaw Speedway Saloon, located pit side along with The Outlaw Speedway TV pay per view on the net for those unable to attend the races in person.

For a complete look at the 2022 schedule of events along with other up to the minute postings go to www.Facebook.com/OutlawSpeedwayLLC/.

Information regarding class rules, track staffing, marketing partners, points as well as directions to the facility log on at www.outlawspeedwayllc.com.

The Outlaw Speedway is located on Rt. 14a in Dundee, NY right the heart of the Finger Lakes Region of New York just a short drive from Geneva, Penn Yan, Seneca Falls, Watkins Glen, Elmira/Corning, Bath and Hammondsport. 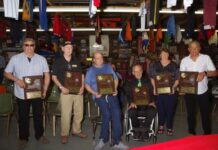