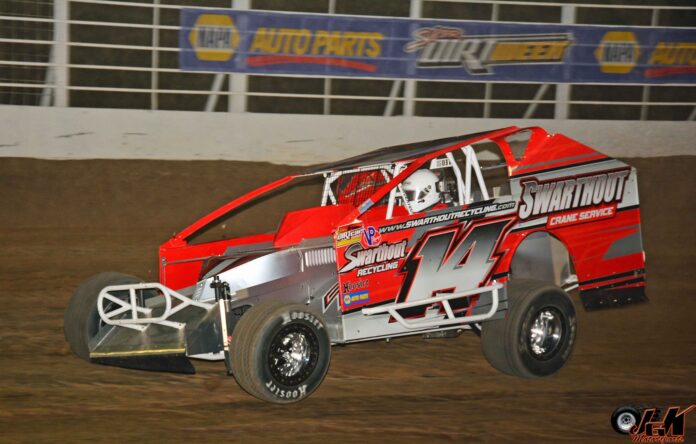 DUNDEE, NY – After two consecutive years of dealing with the COVID 19 Pandemic in 2020 along with a rain filled 2021, Outlaw Speedway track owner/promoter, Tyler Siri is anxious to get the 2022 season of action going and he will do it in a huge way as Lucas Oil will kick-off the yearly campaign.

“In 2020 we never even got started until early June due to New York State Mandates surrounding COVID and when we did get rolling all we ran was regular weekly shows with no special events.  Last season with things back to normal we were able to get the Lucas Oil Nationals into the record books, but we had seven washouts during the regular season along with a rain shortened Fall Nationals weekend in September.  I am really excited about this year’s Lucas Oil Nationals which will kick off the 2022 season.”  That according to Outlaw Speedway owner/promoter, Tyler Siri.

Saturday, April 9 is the date for the annual season lid lifter with the Friendly Chrysler, Dodge, Jeep Ram Modifieds winner picking up a handsome, $3500 for the win.  The Sunrise Insulation American Racer Sportsman along with the Speed Connection DIRTcar Hoosier Tire Sportsman will each race for $1,750 to win their respective feature events as will the Crate Late Models as they too race for $1,750 to win. The winner of the Stan’s No Tubes classy looking Street Stocks will collect $1,200 while the Winner’s Circle Deli Mini Stocks, the NAPA Hobby Stocks and the Swarthout Recycling 60cc Mods all will see winners checks of $900.

Last year in the Lucas Oil Nationals AJ Slideways, Alan Johnson came away with the win in the thirty-five-lap feature event as he was chased across the line by Tyler Siri, The Doctor, Danny Johnson, 2021 Track Champion, The Hurricane Steve Paine with James Sweeting rounding the top five finishers.

Ajay Potrzebowski Sr. found victory lane in the Sunrise Insulation American Racer Sportsman feature as he held off former Track Champ, Karl Comfort and 2021 Track Champion Alex Payne for the win.  Zach Sobotka came away victorious in the Speed Connection DIRTcar Hoosier Tire Sportsman Division as he held off 2021 Track Champion, Ajay Potrzebowski Jr. and Alex Payne who was doing double duty running in both Sportsman Classes.  It is yet to be seen if Sobotka will be back to defend his 2021 win as he recently lost much of his racing operation to a devastating garage fire.

Glen Whritenour began his 2021 reign of terror in the Stan’s No Tubes Street Stock Division by claiming the win at the Lucas Oil Nationals as he held off CJ Guererri and Adam Depuy for the win.  For GW it would be his first of eleven feature wins at Outlaw during the regular season.

Making their lone 2021 appearance at Outlaw during the Lucas oil Nationals, the Crate Late Models feature win was picked up by former Outlaw Track Champion, Chad Homan as he held off J.J Mazur and John Waters.

Marc Minutolo was victorious in the NAPA Hobby Stock feature with Ray Hyer nailing the win in the Winner’s Circle Deli 4 Cylinder Mini Stock Lucas Oil Nationals and for Minutolo it would be his first in a string of feature wins that would propel him to the 2021 Hobby Stock title.

The all new Swarthout Recycling 600 cc Modifieds have been added to the 2022 Outlaw weekly card after an inaugural appearance during the Dutch Hoag Memorial in October of 2021.  Thus far the upstart division has drawn great interest with several different competitors showing their support of the class that makes their 2022 debut at the Lucas Oil Nationals.

It is anticipated that many of the cars and stars that will be competing at this year’s Lucas Oil Nationals will be at Outlaw on Friday night, April 8 for an open test and tune session.

Gate openings and ticket prices for both pit and grandstand entry for the Lucas Oil Nationals on Saturday, April 9 will be posted closer to the day of the event on Facebook.

Camping is free all weekend along with free rides on the tracks monster truck, Outlaw Crusher.

For those that cannot attend the event Pay Per View will be available on the Outlaw Speedway TV with subscription information posted on the tracks Facebook.

The Outlaw Speedway Saloon will be open in the pit area which includes a terrific view of the track from the top observation deck.

As additional news surrounding the Lucas Oil Nationals becomes available leading up to the day of the event including any weather related matters they will be posted at www.Facebook.com/OutlawSpeedwayLLC/.

For directions to the track, the complete 2022 schedule of events, track contacts, rules, sponsor information and much more log on at www.outlawspeedwayllc.com.

The Outlaw Speedway is located on Rt. 14a in Dundee right in the heart of the Finger Lakes Region of Upstate New York just a short drive from Geneva, Seneca Falls, Penn Yan, Bath, Hammondsport and Watkins Glen.