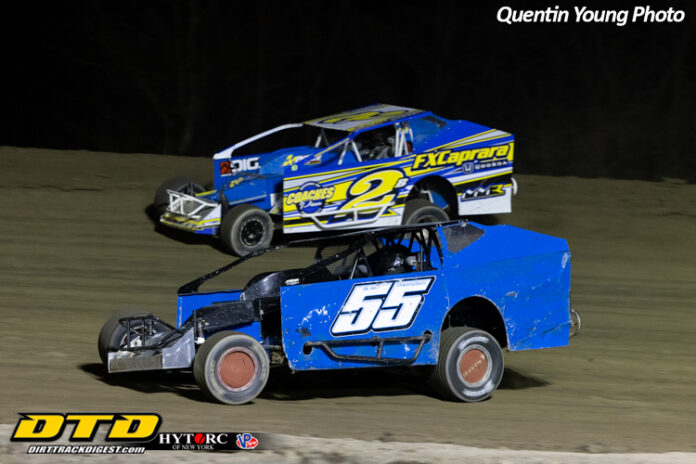 DUNDEE, NY – Outlaw Speedway owner/promoter, Tyler Siri is not a superstitious guy at all, consequently racing on Friday the 13th has only given him more incentive to run a big dollar event for one of the tracks more popular divisions.

“The Sunrise Insulation American Racer Tire Sportsman Class is one of my best classes here at the track.  Week after week the drivers provide awesome competition for the fans and what a better way to reward them than with a high dollar feature event paying $1919 to the winner.”

Former Black Rock Speedway (Outlaw Speedway) promoter, Mike Jackson had raced in almost every class there was until his death in 2020 after a hard-fought battle with cancer.  Jackson had been a hired gun as well as owning and operating his own equipment including Modifieds and 305 Sprint Cars.  He also had enormous success in the 602 Crate Sportsman Division, and this is where Siri is quick to pay tribute to the man.

“Not only did Mike promote this facility before I took ownership some seven years ago, but he was also really good in a Sportsman.  His car number throughout most of his career was 19 thus the $1919 to win the Mike Jackson Memorial Event for the American Racer Tire Sportsman.  That once again according to Tyler Siri.

Also, on the Super 7 card and in addition to the Sunrise Insulation AR Sportsman it will be the Friendly Chrysler, Dodge, Jeep, Ram Modifieds, Speed Connection DIRTcar Hoosier Tire Sportsman, the Stan’s No Tubes Street Stocks and the NAPA Hobby Stocks.  The Winner’s Circle Deli Mini Stocks and the all new Swarthout Recycling 600 cc Modifieds round out the 7-class show.  Also seeing action will be the Fritz Masonry youth Bandit’s.

Gate times and admission prices for both Pit and the Main Grandstand Seating areas along with other valuable information will be posted at www.Facebook.com/OutlawSpeedwayLLC/.

The current point standings, rules, contact information, the 2022 schedule of events and more is just a click away at www.outlawspeedwayllc.com.

Now open is the Outlaw Speedway Saloon located in the pit area offering a top deck with a spectacular view of the Fast 4/10 of a mile clay oval.

Located in Rt. 14a in Dundee, NY, the Outlaw Speedway is situated right in the heart of the Finger Lakes Region of Upstate New York.  Just a short drive from Penn Yan, Geneva, Seneca Falls, Corning, Watkins Glen, Bath and Hammondsport.