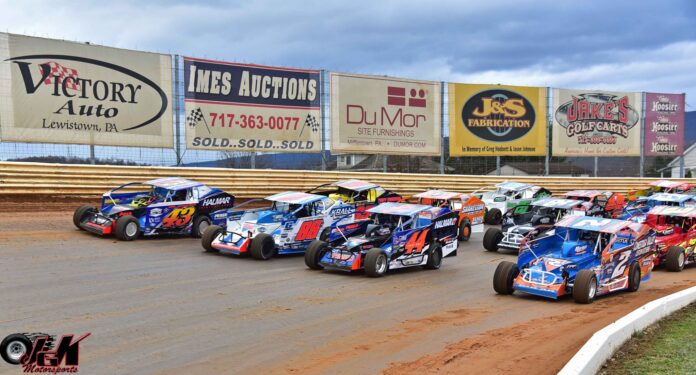 DUNDEE, NY – One of the top touring divisions in the country will make a return engagement to the Outlaw Speedway as track owner Tyler Siri will once welcome back to the Yates County speed plant the Short Track Super Series.

“This is a huge event for us here at the track stated Outlaw Speedway owner/promoter and Modified driver, Tyler Siri.  The absolute best talent in the northeast will be here for the event and this year I also included the Patriot 360 Sprints to the program along with the Short Track Super Series 602 Crate Sportsman.  This is turning into one of our best attended races in both car count and spectator support.”

In addition to adding the 360 Sprints to the card for the Tuesday, May 17 event he will also forgo racing the following Friday night May 20.

“Racing Friday, Tuesday and then again on Friday has proven to be a bit much for my staff, fans and drivers.  I have built into the 2022 schedule three “Off no racing vacation nights” during the season to give everyone a break.  May 20, 2022 is one of those Friday nights that we will take a break. That once again according to Siri.

With gas at the pump, racing fuel, bolt on components, lack of engine parts and the increasing tire shortages it is a smart move for Siri to give the tracks followers a much-needed respite.  In addition to race teams feeling the pinch, fans too are having a challenging time finding a balance when it comes to the added cost of getting to and from the tracks.

In last year’s STSS event at Outlaw, multiple time Modified Track Champion, the Hurricane Steve Paine was finally able to cross a STSS win off his bucket list with a dominating performance leading all 50 laps.  However, many of the touring groups heavy weights gave Paine all he could manage in the closing laps as Mike Mahaney, Anthony Perrigo and Super Matt Sheppard were all within striking distance making it one of the best Modified feature events ever staged at the popular Dundee, NY facility.

The facility is known as the Fast 4/10 of a mile oval for good reason as fans were treated to a real classic on a racing surface that was as smooth as glass and plenty fast with no less than four grooves which competitors could choose from.

“My goal is to put that kind of surface out there again for the racers, stated Siri.  I race myself and I like it when the track is wide and racy.  It gives everyone a chance to pick different lines to see where their car works the best and it also gives fans something to really get excited about.”

Last year’s event was attended by a huge crowd with thousands more enjoying the action on Floracing which will be onboard for the May 17 event providing live coverage.

The A Verdi Storage Containers sponsored 360 Patriot Sprint Tour certainly needs no introduction as the Mike Emhoff led group is ecstatic to be a part of the STSS event at Outlaw.  The PST has an excellent history at Outlaw and being added to this high- profile event gives the group even more creditability with fans at home being able to witness live on the internet the wonderful, winged things in action.

For more information relevant to the Patriot Sprint Tour including a complete look at their 2022 schedule of events, marketing partners, organization history and more go to www.patriotsprinttour.com.

No strangers to Outlaw Speedway the STSS 602 Crate Sportsman will round out the trifecta of classes running on the night as the popular division provides great competition and where-ever they go, the STSS 602 Sportsman always pack the pits with many of the northeast’s top runners.  The STSS rules apply for both the Modified and Sportsman classes where all competitors race on the American Racer Tires.

Gate times and admission prices along with continual updates and any weather-related information will be posted at www.Facebook.com/OutlawSPeedwayLLC/.

Camping is always free at Outlaw and fans are encouraged to come early to attain quality parking and seating at the famed Yates County Oval now celebrating 65 continuous years of great racing action in Upstate, NY.

The Outlaw Speedway is located on Rt. 14a in Dundee right in the heart of the Finger Lakes Region of Upstate New York.  Just a short drive from Watkins Glen, Geneva, Seneca Falls, Penn Yan, Elmira/Corning, Bath and Hammondsport.