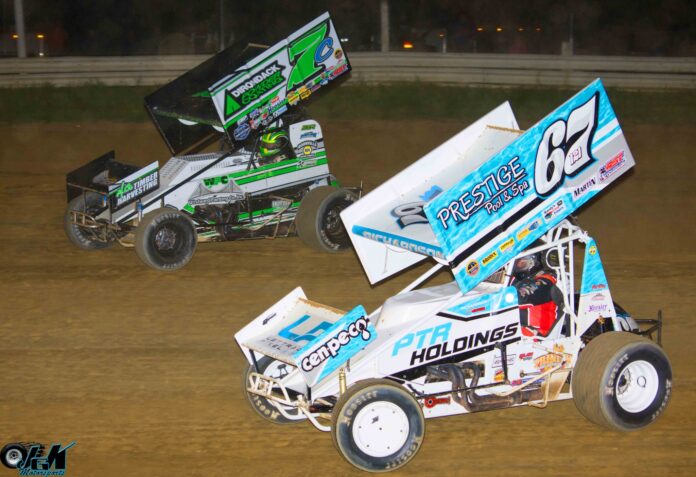 SUSQUEHANNA, PA – After an extremely unusual schedule back in 2020 due to the Covid-19 pandemic, there were two tracks that the A-Verdi Storage Containers Patriot Sprint Tour was able to visit last season and that was Penn Can Speedway and Selinsgrove Speedway.

It was the Patriots first visit to Penn Can Speedway since 2007 and it did not disappoint. After a rain shortened event in August, the series was brought back in late September to finish the August A- Main and run a completely new show. In the first event, Davie Franek was the A-Main winner where he paid tribute to Pete Richardson. A long time PST Competitor that passed away a few weeks before. In the second A-Main, up and coming sprint car star Matt Farnham scored his first career win in 360 sprint car competition.

Last season, the Patriots were also able to visit Selinsgrove Speedway for the annual Joe Whitcomb Memorial. Local driver, Blaine Heimbach picked up the win and it was his 4th time winning the memorial race.

As far as this season, the Patriots have been able to hold three events. The first one being at Outlaw Speedway where it was Davie Franek picking up the win. In the second event, Chuck Hebing was the race winner at the high banks of Woodhull Raceway and the third event was a part of the Ohio swing at the Waynesfield Speedway that was a co-sanctioned event with the National Racing Alliance. Brady Bacon was the victor in that event that paid $12,000 to win.

There have also been three rainouts, one of which was at the Selinsgrove Speedway that was supposed to occur in early May. The other two events were a part of the Ohio Swing that was at Limaland and Wayne County Speedway.

After this Pennsylvania swing, the Patriots have one more event in the month of June which is held at the historic Fonda Speedway on June 26.

For up-to-date information pertaining to this weekend and the rest of the PST events, please be sure to head on over to patriotsprinttour.com. You can also connect with us on social media by liking Patriot Sprint Tour on Facebook or by following @PatriotSprints on twitter and Instagram.