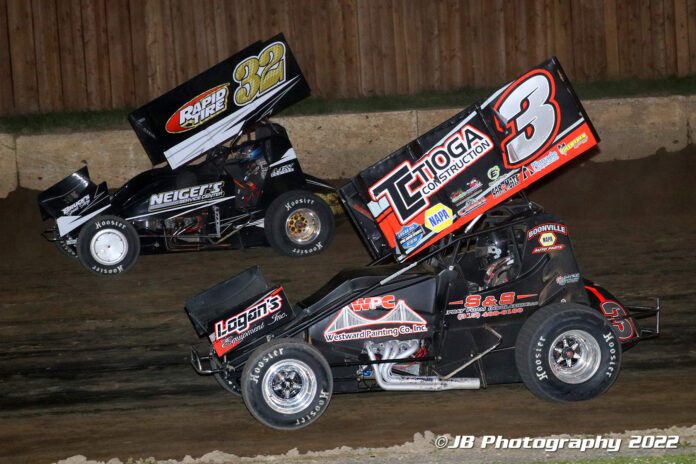 WOODHULL, NY- We all know that Chuck Hebing is good at just about every track he comes to, but Woodhull Raceway is a track he is great at, as he scored yet another win at the famed Bull Ring over Davie Franek and Denny Peebles.

Hebing was able to draw the pole, and he brought the 15-car field to the green. One lap in, Kyle Drum would lose control of the car coming off turn three due to a broken bolt on the car’s front end. Drum would head into the work area, and the Drum Motorsports crew was able to make the proper repairs to return to the A Main.

Hebing would start pulling away from the rest of the field, but the seventh starter, Davie Franek, wasted no time getting to the front and attempted to track down Hebing.

Franek would get his chance to race for the lead on a lap 15 restart, and he capitalized by running the bottom as Hebing remained racing at the top, and Franek would be the new race leader on lap 16.

Franek began to pull away from the rest of the field while Hebing would hold Peebles off for the runner-up spot, followed by Dalton Rombough, Jonathan Preston, and Jordan Thomas.

On lap 24, another yellow would come out as Kyle Drum sustained front-end damage again, setting up a one-lap shoot-out.

Franek’s car was working so well on the bottom, as was Hebing’s car was working great on the top. As the two raced into the first set of corners, Franek would still be holding off Hebing. As they entered the final set of corners, Hebing made the car stick rolling the top, gathering a ton of speed, and beat Franek at the line to score his first PST victory of the season over Franek Denny Peebles, Dalton Rombough, and Jonathan Preston.

The Patriots now receive another month off before competing at Outlaw Speedway again for the Outlaw Fall Nationals, which pays $4,000 to the winner.