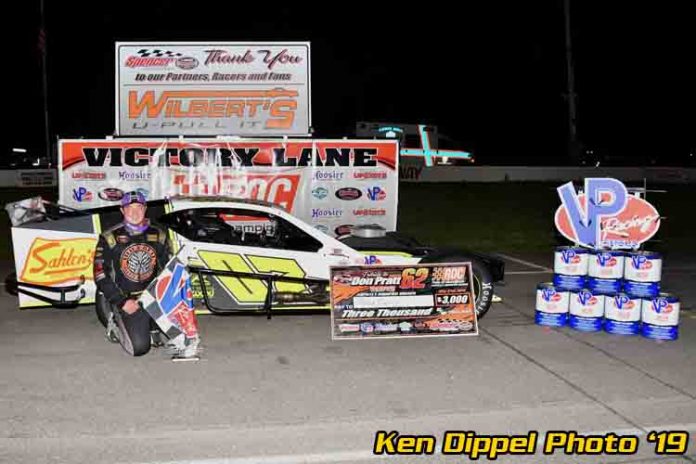 WILLIAMSON, NY – Patrick Emerling of Orchard Park, N.Y., made a dramatic move in traffic to get past Andy Jankowiak of Buffalo, N.Y., to take the lead and go on and win the Tribute to Don Pratt ‘62’ at Spencer Speedway presented by Wilbert’s U Pull-It in Williamson, N.Y., which began the tracks 65th consecutive season of competition.

The win was the 15th of Emerling’s Race of Champions career and his third Series victory at Spencer. He’s just 1 win away from tying his crew chief, Jan Leaty, for 4th on the all-time win list.

“We had a good night tonight,” stated Emerling in victory lane. “Things went our way. We raced Andy (Jankowiak) really hard and I knew Eric (Beers) and Mike (Leaty) my teammate were coming behind me. It’s great to pay tribute to another great Modified competitor in Don Pratt and thank you to Curt Tooley for working extra hard to raise additional lap money.”

Jankowiak ended up in the turn four wall on a restart, before Eric Beers of Northampton, Pa., gave Emerling a challenge to the finish.

Chuck Hossfeld of Ransomville, N.Y., posted the Speed51.com “Top of the Board” overall fast time in group time trials with a lap of 18.893 seconds with an average speed of 95.273 mph.