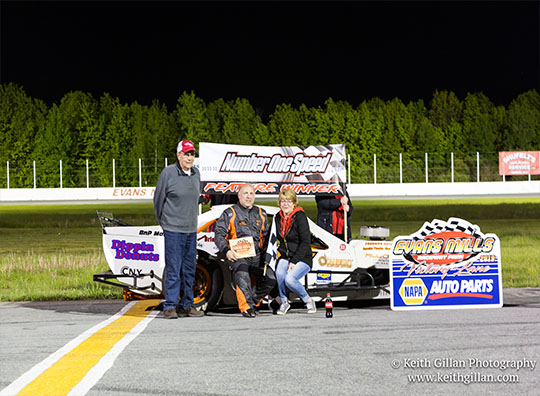 If it’s true that it takes a few weeks for a speedway with a new owner to get in the groove, then Number One Speed night on Saturday June 1 might be the turning point for Evans Mills Raceway Park. The largest crowd of the season saw some very competitive racing on a much improved racing surface. The “sticky” lane was moved down a bit and the competitors agreed that the surface combined with the warm temperatures made a big difference in how the cars were able to race.

Tim Dunn in the 96T as the winner of the first heat was the one to pull the number to see how many cars would be inverted for the feature. He drew the #1, exactly the number he wanted. The first few laps saw quite a bit of side by side racing through the middle of the field while Josh Verne Jr. was able to power around the outside at the start. Josh would win the Serv Pro Thunderstock Class and Tim Dunn would get the #1 spot for Sport Compacts.

The INEX Legends 25 lap feature was quite an adventure. Heat winner Daniel Carter from Cortland NY also drew the #1 for inversion so he could start in the pole position. He led the whole way but the action behind him was fast and furious. There were a slew of cautions every few laps as some drivers went through a “bump the other guy” phase while others did some spins on their own. The cone restarts proved fascinating as at one restart the top six cars all chose the inside lane, resulting in the 7th place car vaulting all the way to the number two spot on the outside. The inside lane still seemed the place to be in this class. Several drivers made their first start of the season, many of them strong runners from other years. Unfortunately it was a night of attrition and just a little over half the field finished with a number of cars sustaining damage. In victory lane, Daniel Carter said he felt like it was the longest race he’d run in a long time. It was Carter’s first visit to Evans Mills this year.

The Caskinette Ford modifieds put on a torrid race as 5 cars were inverted for the feature. Tony Pettinelli in the 2NY car and Chad Blair in the #6 waged a side by side battle for nearly half the race, something not seen before in this class at Evans Mills. Mike Ramos in the #09 joined the fray, and after Ramos got by Blair, the chase was one. A lot of bumper tag was played, and after Ramos made a pass on Pettinelli, he took a pretty good rap between turns 3 and 4 that sent him up the track. Somehow Ramos saved the car and kept the third spot. Pettinelli would go on to win his first race at Evans Mills since a snowmobile victory in 2001. Ramos was able to get second place back in the closing laps but couldn’t get by Pettinelli. Pettinelli was jubilant in victory lane while Ramos fumed in the second spot. Blair finished third.

The pits were buzzing afterward with the spirited competition and improved condition of the track. Evans Mills is a track on the way up and word is that several more new cars and drivers will be joining the ranks in the coming weeks. The next race night is Saturday June 8 at 6:45 pm.