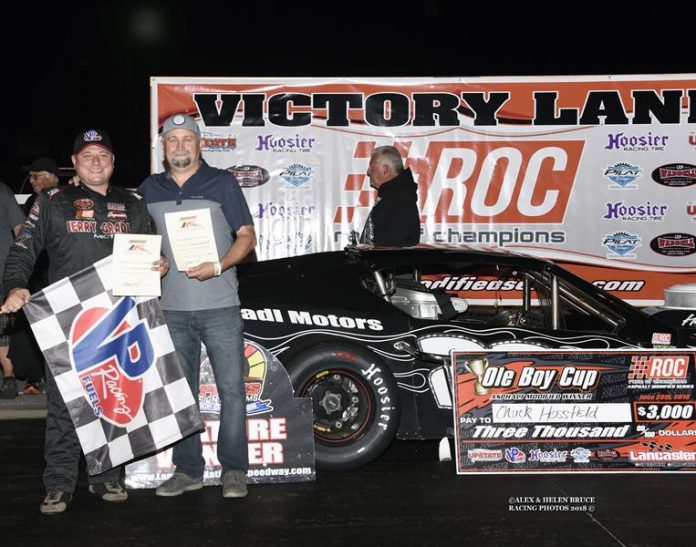 LANCASTER, NY – On Thursday, June 27, 2019, when the Race of Champions Asphalt Modified Series rolls onto the surface at New York International Raceway Park home to Lancaster National Speedway for the running for the fifth annual Ol’ Boy Cup, it will be a homecoming, which many did not think would happen in 2019, until the track was saved from closing in May. It will be an emotional night for many.

The race will once again on Bill Colton, one of Lancaster’s biggest supporters and the innovator the foam soft walls, which are provided by Thermal Foams. Colton of North Tonawanda, N.Y., in a cooperative effort with former Lancaster an originating partner of the Race of Champion Series, Alex Friesen from Niagara-on-the-Lake, Ontario installed the original foam blocks (the original soft wall barriers) at Lancaster which were produced in Kenmore, N.Y., at Thermal Foams.

Chuck Hossfeld of Ransomville, N.Y., walked around the ½-mile oval last fall with doubts that he would be racing at his “home track” in 2019.

“I can’t wait,” stated Hossfeld, one of most Lancaster’s most prolific winners. “When the news came out that there might not be racing at the track, it was a hard pill to swallow, then we waited. It was last minute and the emotions are hard to explain, but the important part is we’re back there racing and we all need to look at this as an opportunity for the place to shine. Bill (Colton) helped my career immensely, he was so influential in the racing community. We’re looking forward to racing at Lancaster and honoring one of the men that made the place so great. It’s going to be a very special night.”


Pit gates will open at 3:00pm for the Modifieds only, with other divisions opening at 3:30pm. Qualifying will begin at New York International Raceway Park home to Lancaster National Speedway on Thursday at 7:05pm. Visit www.rocmodifiedseries.com for more information on the “Ol’ Boy Cup V”.

Directions: The track is located at 57 Gunnville Road in Lancaster, N.Y., just North of Route 33 and minutes from the New York State Thruway.