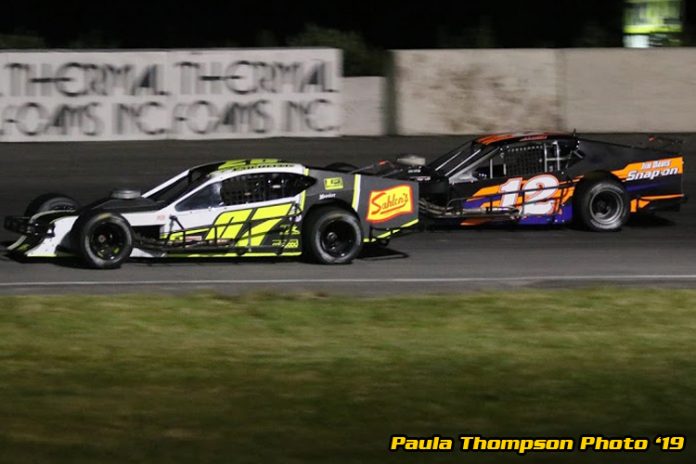 The event was the first stock car race held under the New York International Raceway Park (NYIRP) ownership group, which purchased the facility in late April. NYIRP has partnered with the management and staff of the Race of Champions to put on a six-race schedule of stock car races in 2019.

A total of 25 RoC Modifieds were on hand for the first of three visits by the series this season at Lancaster. Timmy Catalano and Daryl Lewis, Jr. were scheduled to lead the field to the opening green flag. Things did not go as planned for Lewis, however, as he pulled out of line just as the field came out of turn four to take the green. He stopped on the track to put the start of the race on hold.

This moved Scott Wylie to the front row for the second attempt to start the race. Wylie capitalized on this as he grabbed the lead from Catalano when the race got under way. Eric Beers eventually settled into second followed by Patrick Emerling, Catalano and Chuck Hossfeld.


Emerling, a former Ol’ Boy Cup winner, wasted little time as he moved from his seventh starting position to take over second from Beers on lap 6. The race continued just past the halfway point without another caution as Wylie and Emerling pulled out to a slight advantage over the field.

Jankowiak started 10th after winning his heat race. He passed Hossfeld for third on lap 14, but was over a second behind the leaders at this point. Jankowiak made up the ground, and was challenging Emerling for second right before the caution came out on lap 31 for a spin by Jake Rought.

The race took a dramatic turn following a restart on lap 34. Wylie and Emerling were racing for the lead in turn two when the pair made contact. Wylie suffered a damaged left front wheel, and lost control of the car. A few cars were caught up in the chaos the ensued. Daryl Lewis, Jr. hit a Thermal Foam block protecting an infield light pole, but was able to drive away. Jack Ely suffered the worst damaged, which ended his night. Wylie’s night was also done after leading the first 34 laps.

Emerling lost momentum when he made contact with Wylie and slipped back to second place. Jankowiak was scored as the leader when the race restarted followed by Emerling, Catalano, Hossfeld and Beers.

Catalano got past Emerling for second on the restart. This allowed Jankowiak to pull away as the pair battled for position. He looked to be on cruise control to an easy victory when a pair of yellow flags on lap 48 bunched the field up one more time.

Emerling regained second on the restart, and then went after Jankowiak to try and take the lead. He hounded Jankowiak throughout the final 10 laps, looking to make an inside move. While Emerling looked to have the stronger car, Jankowiak did a masterful job of not relinquishing the inside line.

Jankowiak held on to capture the Ol’ Boy Cup V for his fourth career RoC Modified win at Lancaster. He has won four of the last ten RoC races at Lancaster dating back to the start of the 2017 season.

While he has done a lot of traveling to other tracks up and down the East Coast this season, Jankowiak was happy to be back in victory lane at the track he grew up at. “It is fun going in the truck to Riverhead, Bowman Gray and Seekonk, but this is home, and I’m glad so many fans came out to support this race tonight at Lancaster,” said Jankowiak.

Emerling had to settle for second followed by Hossfeld, Catalano and Beers. The RoC Modifieds return to Lancaster on August 17 for the 30th annual Tommy Druar/Tony Jankowiak Memorial 110.

Front row starters Mark Hoch and Tim Welshans battled for the duration of the 30-lap Street Stock feature. Hoch led the opening seven laps from the pole while followed closely by Welshans. There was one caution during the race. It came on lap 7 when Ken Maltby and Rich Sharpe got together off of turn two.

Welshans took advantage of the restart to take the lead from Hoch. He then held off Hoch for the final 22 laps, without a caution, to capture his first ever Street Stock win at Lancaster. Hoch finished second followed by Nik Welshans, Max Northem and Tommy Wentland. A total of 23 Street Stocks were on hand.

The 4-Cylinder 20-lap feature had several caution periods, but also had some intense battles for the lead throughout. Former track champion, Dan Dressel, grabbed the initial lead from the pole position. He led until lap 3 when Dave Brunka and Jacob Gustafson got by him.

Josh Schosek started ninth in the 19-car field, but passed Gustafson for second by lap 5. He got by Brunka for the lead just two laps later.

Gustafson landed back in second to battle Schosek for a second time. The young driver from Webster, N.Y. used the outside line to challenge Schosek for the lead. Gustafson managed to take the lead on lap 13, but could only hold it for three laps.

Schosek took the lead back for good on lap 16, and he survived two restarts with less than three laps to go to capture his first win at Lancaster. Gustafson finished second followed by Jason Anasiewicz, Dressel and Brunka.

Kyle Hutchinson dominated the NYPA TQ Midgets feature as he led all 20 laps from the pole. He faced a couple challenges from eventual runner up Dave Wollaber. Andy Nye finished in third. Andy Jankowiak started last, and made his way up to fourth by race’s end. Erik Musto rounded out the top five.

The next stock car event at Lancaster Speedway @ NYIRP is Thursday, July 11 with the Joe Reilly Tribute 54 for the RoC Sportsman Series. The Street Stocks, 4-Cylinders and NYPA TQ Midgets will be back in action as well.

About Lancaster Speedway & Dragway @ New York International Raceway Park: Founded in 1959, Lancaster National Speedway and Dragway, WNY’s Premier Motorsports and Event Facility, is a multi-use facility located on 77 acres just outside of metropolitan Buffalo, N.Y. The facility features a 1/8-mile drag strip, a 1/2-mile oval track and hosts several non-motorsports events such as car shows and concerts. For the latest information on Lancaster Speedway & Dragway @ NYIRP check out our website www.lancasternationalspeedway.com. Additional information for racers and fans can be found on our Facebook page (www.facebook.com/LancasterSpeedway) and on Twitter (@LancasterSpdwy).