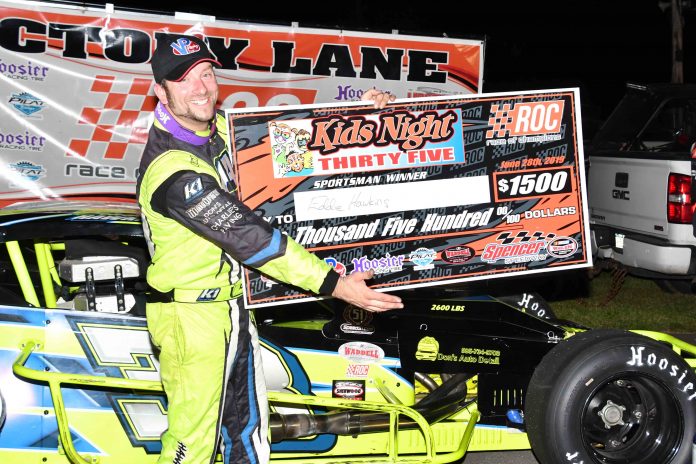 WILLIAMSON, NY – Eddie Hawkins of Walworth, N.Y., made the most of “Kids Night” at Spencer Speedway presented by Wilbert’s U Pull-It, as he posted the overall fast time in group qualifying, won his qualifying race, redrew the pole and went on to win the opening 35-lap feature for the Race of Champions Asphalt Sportsman Modified Series this past Friday night. It was the Race of Champions win for Hawkins.

“This is really cool and a big deal for us,” stated Hawkins from victory lane. “We had a great car all night, from the time we arrived. Things just seemed to go our way. I want to thank my family and especially my Dad for all of his help. This is a great way to get things going and it’s great to see the track back with the enthusiasm it has right now.”

Hawkins was challenged by several restarts and the advances of Kevin Timmerman of Walworth, N.Y., who finished second. Timmerman advanced from the 7th starting position.

Mike Leaty of Williamson, N.Y., finished third after starting 9th, while Daryl Lewis (fourth) and Andy Lewis (fifth) both of Ontario, N.Y., rounded out the top-five.


In Race of Champions Super Stock Series competition, Tommy Krawczyk of West Seneca, N.Y., crossed the finish line first, but was penalized all points and money for a post-race technical infraction. The engine in the 48 car exceeded the maximum compression permitted per the 2019 Race of Champions rule book. Tommy Barron of Ontario, N.Y., finished second and Joe Mancuso of Buffalo, N.Y., finished third.

Kid’s Night saw children win four bikes from Wilbert’s U Pull-It and Timmerman Racing. Kid’s had the opportunity to enjoy face painting, a fire truck, a balloon artist, bicycle races and a candy dash down the front stretch of the 65-year old facility.

Full results can be found at www.rocmodifiedseries.com