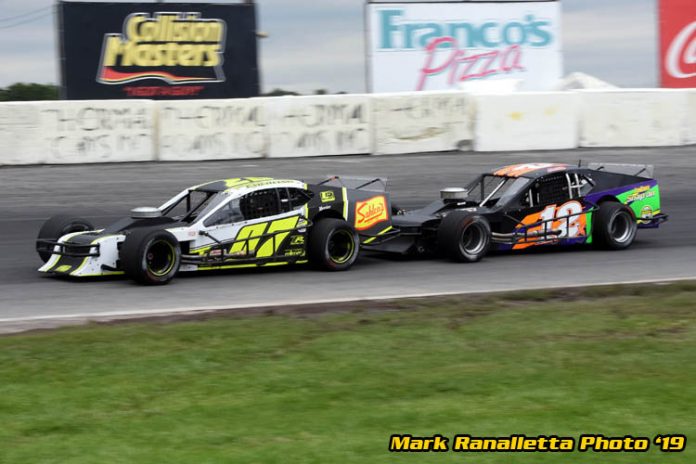 In supporting action from the final day of the U.S. Open, Eldon King III of Freedom, N.Y. won the Race of Champions Late Model Series feature. Rich Sharpe of Lancaster won the U.S. Open Street Stock feature for a fourth-straight year, and for the fifth time in the last six years.

Andy Jankowiak and Timmy Catalano led the field of 24 Modifieds to the opening green flag of the U.S. Open 125. Jankowiak led the opening lap before giving way to Catalano. Catalano controlled the pace through the first 20 laps of the event. The yellow flag was displayed for the first time on lap 20 when Chris Ridsdale spun.

Mike Leaty started fourth after setting fast time in qualifying and winning his heat race. He moved into second behind Catalano when the race restarted on lap 27, and then took the lead on the following restart 11 laps later.

Catalano did not let Leaty get away without a fight, however, as he chased Leaty for 15 laps before recapturing it on lap 53. His brother, Tommy Catalano, was running third until a mechanical issue took him out contention on lap 57. The caution flag was displayed again when Catalano stopped on the race track, which set off the first round of pit stops. Timmy Catalano, Emerling, Jankowiak, Scott Wylie and Owen Bednasz were among the ten cars that decided to pit.


Leaty was handed back the lead as Catalano made his pit visit. He was joined at the front of the field by Eric Beers, Matt Hirschman, George Skora III and TJ Potrzebowski when the race restarted just after the halfway point.

The misfortune for the Catalano family continued on lap 76 when Amy Catalano stopped on the track with an issue to bring out the yellow flag again. Leaty and Skora came to the pits during this caution period, which gave the lead to Beers and moved Hirschman to second.

Hirschman, the defending and five-time U.S. Open winner, didn’t waste time on the restart as he took off when the green flag came back out to take the lead from Beers. It looked like Hirschman could be on his way to a sixth win on lap 87 when Chuck Hossfeld and Timmy Catalano made contact in turn one to signal the final caution period of the race. Hirschman and Beers pitted at this time to try and set themselves up for about a 30-lap dash through the field.

Emerling inherited the lead when Hirschman and Beers made their stops, which were the final two cars in the field to pit. Jankowiak lined up second followed by Hossfeld, Kevin Miller and Timmy Catalano.

The race restarted with 31 laps to go, amd Emerling and Jankowiak took off from the field as they turn things into a two car battle for the win. Jankowiak appeared to have the stronger car early in the stretch run as he pressed Emerling especially on the outside through turns one and two. Emerling ran that outside line to block the advances of Jankowiak.

Emerling began to pull away in the final 15 laps as Jankowiak’s car started to fade. He pulled out to over a one second advantage as Emerling worked through lapped traffic. Emerling cruised to the checkered flag for his second win in the U.S. Open 125. His victory, combined with a second place run in Friday’s Tommy Druar/Tony Jankowiak Memorial 110, has allowed Emerling to close within two points of Jankowiak for the RoC Modified Series points lead.

Jankowiak finished second after a strong showing. Leaty came home third to give his L2 Autosport team two cars in the top three. Hirschman finished fourth after his strategy to pit late did not go as well as he had hoped. He got hung up in traffic, and wasn’t able to move through the field until very late. Chuck Hossfeld finished fifth in what could be his final U.S. Open start as he has announced he will retire from driving full-time at the end of this season.

Eldon King III held off Danny Knoll, Jr. to clinch his first win RoC Late Model Series win at the U.S. Open. King took the lead from Terry Weldy on lap four, and then survived 29 lap green flag run to the finish to pick up the win. Knoll was right on King’s tail throughout most of the race, but was unable to overtake him. Weldy finished third behind King and Knoll. Dave Whittaker and Bobby Weber rounded out the top five.

Rich Sharpe continued his domination of the Street Stocks at the U.S. Open as he won for the fifth time in six years. Sharpe did have his work cut out for him, however, as he started 12th in the 24-car field.

Nik Welshans and Chris Powers led the field to green, and Welshans took the lead at the drop of the green flag. Welshans held the lead until lap 16 when Mike Scott drove between him and a lapped car down the front straightaway to take over first place.

The start of the Street Stock feature went caution free for the first 17 laps until Brian Hoffman spun out in turn two. Rain began to fall during the caution period, which caused about a 30 minute delay to dry the track.

When the rain stopped and the race resumed, Sharpe moved into second place behind Scott followed by Nik and Tim Welshans and Tommy Wentland. Debris on the track brought the yellow flag out again on lap 21. Sharpe lined up on the front row with Scott on the restart, and he took over the lead when the race went back to green.

Sharpe drove away for the final eight laps to pick up his fourth win in a row at the U.S. Open. Scott held on to finish second followed by Tim and Nik Welshans and Wentland rounding out the top five.

The U.S. Open brings an end to the 2019 Stock Car season at Lancaster Speedway. The NYIRP ownership group and the Race of Champions have already announced that they will be working together again to present a schedule of stock car events in 2020. The 32nd annual U.S. Open will take place September 11-13, 2020. The full schedule will be released in November. 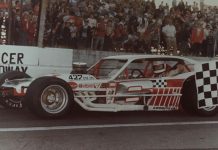