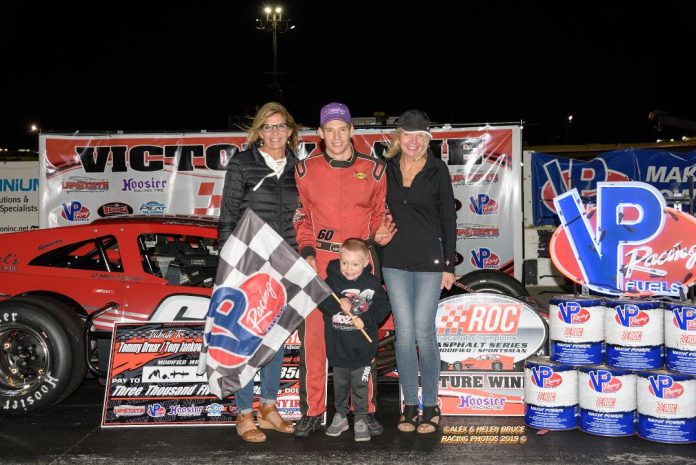 The 110-lap race originally started on August 17, but was halted after six laps after a crash by Karl Hehr damaged the catch fence on the front straightaway. The race resumed on Friday night to kick off the 31st annual U.S. Open weekend at Lancaster.

When the race was stopped Eric Beers was scored as the leader followed by Chuck Hossfeld, Patrick Emerling, Daren Scherer and Daryl Lewis, Jr.

The race resumed 27 days after it was halted, and Beers retained his command of the field followed by Hossfeld and Emerling. Hossfeld developed an issue around lap 20 and began dropping through field. He eventually spun out in turn two on lap 24 to bring out the yellow flag. Hossfeld would be in and out of the pits throughout the rest of the race.

Several of the front runners pitted during the caution period, including Emerling, Daren Scherer, Amy Catalano and Kevin Miller. The race restarted on lap 32, but was quickly under the caution flag again when RoC Series points leader Andy Jankowiak, Chris Ridsdale and George Skora III tangled in turn three. Jankowiak’s car drove over the front end of Ridsdale. He went to the pits, but came back out with something dragging from the rear of the car.

Beers continued to lead the race with Tommy Catalano now in second place followed by Matt Hirschman and Amy Catalano. Jankowiak stopped on the track to bring out the yellow flag again on lap 41.

The race went past the halfway point with Beers still leading. Catalano and Hirschman traded the runner-up position back and forth. Emerling led the cars that pitted earlier in the race, and was up to fourth place by lap 57.

Owen Bednasz spun out on lap 71 to bring out the caution flag after just over 20 laps of racing under green. This gave Beers and Hirschman the opportunity to pit for a new tire while Catalano elected to stay out.

Catalano inherited the lead when Beers pitted, which also moved Emerling to second followed by Scherer, Skora, Hirschman and Beers. It took Emerling just three laps to get by Catalano when the race restarted. Hirschman quickly moved his way to the front of the field, and he passed Catalano for second lap 83. Emerling and Hirschman eventually pulled away from the pack.

One final caution with five laps to go was all that separated Matt Hirschman from his fourth career win in the Tommy/Tony 110. He pulled away in the final circuits to secure his first RoC Modified Series win of 2019. Emerling had to settle for second, but he managed to cut Andy Jankowiak’s series points lead to just 12. Beers finished third with Kevin Miller and Tommy Catalano rounded out the top five.

The U.S. Open continues at Lancaster on Saturday with the Joe Reilly Crown Royale Classic 54 for the RoC Sportsman Modifieds and the John Julicher Memorial for the RoC Super Stocks plus TQ Midgets and 4-Cylinders. Racing starts at 4 p.m. 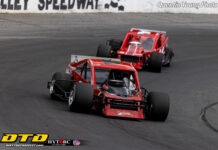