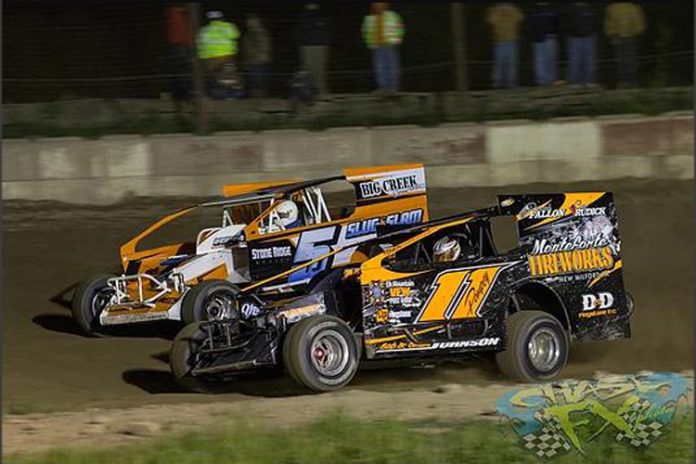 SUSQUEHANNA, PA – It may be early in the season but Dan Pompey has made his intentions clear. May 26th saw the Kingsley, Pa native score three consecutive modified wins. This Friday June 2nd, Pompey will pull into Penn Can Speedway with a $300.00 bounty on the #11 powerplant.

PCS promoter Doug Borger explains the bounty system. “Next week someone will be $300.00 richer. At night’s end if Pompey wins he will receive the money or the driver that knocks him out of victory lane will take home the extra cash. The kicker is that if Pompey wins, we go into the next race with the same bounty.”

Mike Shane, driver of the m16, could be the next bounty. Unfortunately, the 602 crates fell victim to the rain and will run double features next week. If Shane can win the first feature, he will move into the hunted category for the second feature. The same bounty rules will apply to the crate sportsman as well. Factory Stocks will also run a double feature.

Pompey has had the start that drivers can hope to have. His late race surges have kept him on top even with a challenging track the last two weeks. It hasn’t been easy wins for the Pompey team. Kevin Hartnett, popular driver of the #88, has 2 top 2’s and a 3rd to Pompey.
Three wide racing with Joey Grammes the first week, second week comes down to the wire and to finish with lap cars in the mix has many wondering if anyone can topple Pompey.

Gary Folk, head flagger, said it best,” Don’t let the car counts fool you, that has been some of best racing I have had the privilege to work and watch. They work on the track all week and are getting a handle on the old girl.


The 4-cylinder division saw a new points leader when the checkered flag flew. Mike Robinson left Penn Can with a trip to victory lane and the points lead. Nick Kennedy lines up second with a 20-point difference. Brother Frankie Kennedy is within 55 points of the leader.

The Xcel 600 modifieds had a 20-lap thriller with Bailey Boyd taking home the win followed by current points leader Kamdin Maby. Both drivers are part of the young guns in the 600 modified ranks and veterans of the division.

Penn Can has a busy month of June ahead. First on tap is the 4-cylinder Spectacular 30 lap feature on the 2nd. The popular Bike Night follows on June 9th with bike races on the 23rd. Back in action on the 16th will be the CRSA sprints. Closing out the month will be Fan Appreciation Night set for June 30th. Spectators will be able to get up close and personal with the drivers, cars and crews. Many teams gear up for the night with give aways for the young and old.