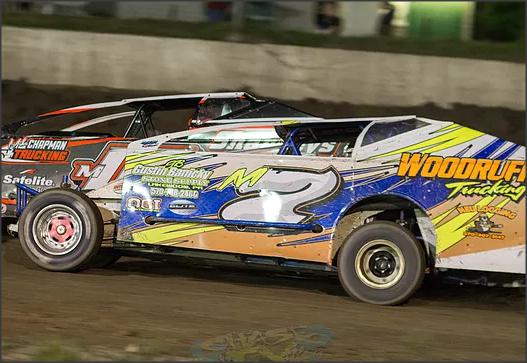 SUSQUEHANNA, PA – Bikes, Bounty Hunter, heart break and a doctor were in the house. June 16th saw Penn Can Speedway’s Gary Folk, head flagger, bring in 150 new bikes to be given away to the kids. Grammes Racing donated T-shirts along with Wagner Lumber tossing frisbees and pacing the modified field to the green.

Palmerton native Joey Grammes showed just how passionate racing can be in his second consecutive trip to victory lane. “Man, Hartnett had this race won. I know the heart break he felt with breaking on the final lap. It’s a hard pill to swallow but we know it can happen. Then to look out to the crowd and see so many kids with bikes get you going. These kids are the future of racing. There are not only drivers here but a future crew chief and pit crew. You never know where he or she will end up.”

Mike Nagel Jr. became the hunter in the 602 sportsman 25 lap feature. Nagel will be celebrating his first Father’s Day with a bonus of $250.00 taking home $850.00. “I can’t thank my wife Clarissa enough for supporting my love of racing. I grew up here and someday I hope Bryson will follow”. Mike Schane was happy to see the cam doctor in tech. ”

Everybody came over to tech tonight. I think Doug bringing in the cam doctor was the best thing for the division. We get into it for the cost effectiveness and now it shows”.
You never forget the first career win and Travis Fichter will savor the moment for a long time. The Kunkletown Pa native held off hard charging Bailey Boyd to earn the Xcel 600 modified caution free 20 lap event.

A family affair seems to be the theme for the 4 cylinders. Brothers Mike and Dylan Robinson duel it out with the Kennedy brothers Frank and Nick. You could put a blanket over the top four week in and week out. Frankie Kennedy held off the charge to take the checkered.
The #57 factory stock owned by Nate Shay pulled into victory lane with Jeremy Williams as the pilot. Williams was ecstatic over the win. “Nate is always talking about having fun at the races. I know it’s fun driving. Hope the fans have just as much fun watching”.

Next week will have the kids coming back to take their turn on the speedway. Bike races will take center court for intermission. They will be divided in the following age categories. 5 to 7, 8 to 10, 11 to 13, 14 and up. Kids must sign up at the candy stand before intermission. Trophies will be provided by S&R Grafics/Ryan Stone Motorsports #67R. Awards will be handed out after all the races are done.

The popular Fan Appreciation night for June 30th will see some changes. Cars will be parking on the front stretch with the Pocono Speedway pace car parked under the flag stand. Pocono will also be giving away some goodies. We could see an appearance of their mascot “Tricky”. Numerous business has also stepped up with give away. A flyer will be released shortly with information for the nights events.