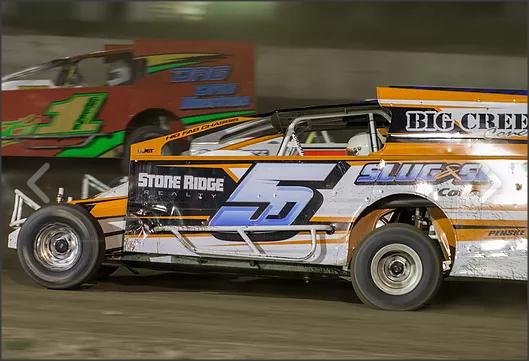 Man on a mission describes Palmerton Pa. native Joey Grammes. The hard-charging modified driver combines his 2 passions into 1 night. This past Friday July 21st, he did just that at Penn Can Speedway. “Growing up at the track gives you responsibilities at a young age. What it teaches you is respect is earned not given. I have a family that is close for those reasons. I see all these kids out here and I can’t help but hope for our future and the future of racing.”

Multi feature winner Dan Pompey, who started 8th, kept knocking on the door on the 5j of Grammes but couldn’t get it open. “We keep chipping at the points each week. I haven’t had this much fun in a long time.” Stated Grammes in victory lane.

Mike Nagel jr. continues to dominate in the 602-crate sportsman division. Lap traffic had the leaders on the wheel has the 25-lap feature went green to checker. Devon Zona and current points leader, Mike Schane, battled for the bridesmaid position with Zona at the line.

Mike Robinson has his power plant set for victory lane. Frankie Kennedy and Joshua Wilder finished the night with a great run.

Randy Fox is back to his winning ways in the factory stock division. Stephen Simpson and Josh Towner had a great battle with Simpson over Towner.


18 Xcel Chassis 600 modifies signed in for the nights events. Jamie Frantz rebounded after a motor swap this week with a trip to victory lane. “This is what is so great. You go from zero to hero in one weeks’ time. It’s good to get that first win of the year out of the way. Hopefully we will be back soon.” smiled Frantz after tech was completed.

Penn Can Speedway will have a full weekend of racing this Friday July 28th and Sunday July 30th.

On Fridays card will be the popular Legends of Penn Can along with the “Pappy” Beavans Memorial. There will be vintage cars located behind the grandstand. The Xcel Chassis Series will roll in with the North and South tour coming together.

Sunday will see the Grit 602 crate sportsman series make their first appearance of the 2017 season. 30 laps will have a driver take home a $1000 payday. On the card will be the Xcel Mods and Factory stocks. The 602 crate wingless sprints will also make their first appearance of the year. All the information for the weekend can be found on te website at www.penncanspeedway.net