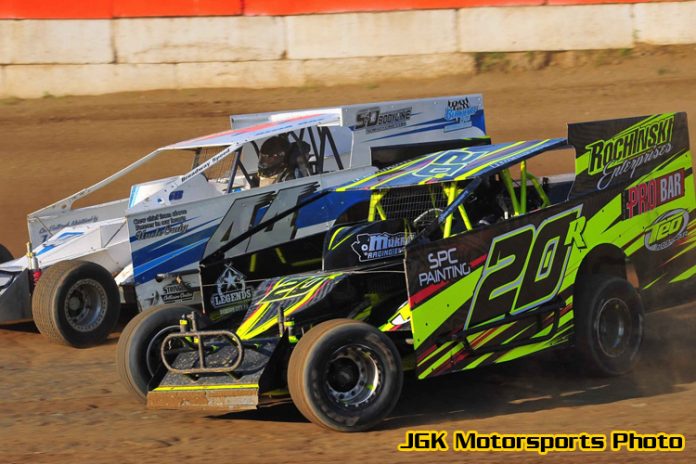 SUSQUEHANNA, PA – Nick Rochinski returned to Penn Can Speedway September 1st and headed straight to victory lane. Kevin Hartnett earned his second trip of the season as winners of the twin 20’s. In the first feature, 18 modifieds raced green to checkered with no car dropping out.

Rochinski got to the point at the drop of the green with Points leader Dan Pompey sticking to the rear bumper. Lap traffic started on lap #10 for the leaders. As Rochinski dealt with Pompey, Hartnett made his way to 4th from his 12th starting position. Lap#18 had Hartnett get pass Mike Dougherty to take 3rd with Pompey finishing second.

In victory lane, Nick would pick a number out of the bag to invert the field. The numbers 4,6 and eight were available and six would be the magic number.

As the second twin 20 rolled out, drivers were ready to rock and roll. Hartnett looked to improve on his third-place finish and sure enough he continued where he left off in the first twin 20. The momentum carried him to the winner’s circle on a dusty track. “Man, that was interesting, just when you think you might have gained ground on Pompey. He’s right there with you. He’s a tough man to beat but we are not out of the picture yet.”


The 4 cylinders saw Frankie Kennedy bring home a win. Nick Kennedy and Mike Robinson came into the night tied in points. After Robinson ended his night early, Nick would leave the track with a 5-point lead over Robinson.

The Factory Stock division continues to see the most first-time winners of any division. Nate Hill took his first career trip to victory lane over Brady Simpson and Paul Conklin. The 01 of Jason Rinker would be disqualified for unapproved parts.

The Xcel Chassis 600 modifieds put a show for the fans. Travis Rigante topped a powerful 18 car field in the 20-lap feature. On September 15th, the Xcel north and south tours will converge for a 40-lap spectacular. This night will be dedicated to the memory of Carl Kithcart. His son, Chris, has a two-car team with the Xcel family. Carl could always be seen thru out the pits shooting the breeze. Carl may be gone but his kind and gentle soul will always be remembered.

Many spectators witnessed the water truck break at the end of intermission last week. What many missed during the week is the dedication of the Penn Can crew to get a water truck for this weekend. Doug Borger was on the phone all week trying to secure a truck. Up until late Wednesday night, none was to be found and then the phone rang. A truck chassis was found and towed to the track. To the surprise of the crew, it had not been started for a year and the tank would need to be taken off the old water truck and reinstalled onto the new addition. The crew worked thru the night on Thursday until Friday. The truck hit the track at 5 and racing would go on. ” I knew the track was going to be dusty. If it wasn’t for the guys getting it done, we might have all been sitting home.” stated Borger.”

A slight change in the points schedule has been decided. The original schedule was to have the points run until the King of the Can weekend in October. After consideration, Borger has decided to make September 29th Champion night. “These guys work all season to get the most points they can. I don’t want to see a championship influenced by any new drivers to the track. We expect some new cars for the rest of the season to get track time before the King of the Can weekend. This will allow the Penn Can regulars to race that weekend without the worry of points.”

King of the Can weekend information will be released shortly. New for this year will be the first Racers Flea Market. A date will be announced soon along with sign up information.