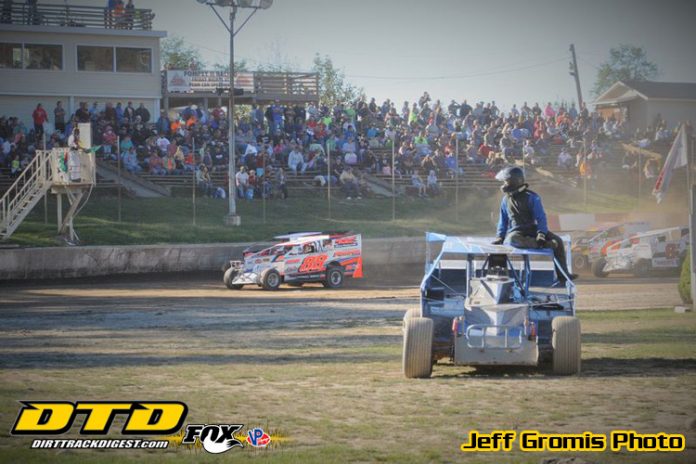 SUSQUEHANNA, PA – Mother Nature threw another twist to the Penn Can Speedway 2017 season on September 9th. A brief delay in the program was called for due to FOG. Nick Petrilak and his team showed how hard work in the shop pays off with his first win of the season. “I have to thank everyone who thrashed on the car this week. We were flat out terrible by our standards last week. Robert Frazier has worked his butt of this week and look where we ended up.”

After heats were completed, a drivers meeting was decided to see if the program would continue. “When I couldn’t see the flag stand or even the tower standing in turn three, I knew we had to make a decision. I didn’t want to put a gun to the drivers and say they had to run so I left it up to them. Just as they decided to go for it, the fog lifted. We had just enough time to get features in before it came back.” stated promoter Doug Borger.

The Xcel 600 modified feature was decided to be run on September 22nd. They will run the held over feature than have a regular night.

Petrilak and the powerful #72 mount took the lead early and then checked out from the field. Current points leader, Dan Pompey, was a distant second. Halfway seemed to be when Pompey tires came in has he had the popular #11 on the bumper of Petrilak by lap #25. The last five laps had Pompey take the lead. Petrilak would not be out driven and took the lead back by the next circuit. Four laps of side by side racing had the spectators screaming. The two put a clinic on how to race hard and manage to stay clean.

Petrilak had the edge over Pompey to score his first win. “The car was just awesome. Thanks to the staff for sticking out with the weather. I knew I had to give it everything I had to get by Pompey. There is no denying he is the king right now.” Petrilak stated in his victory lane interview.


The number five may become Alex Yankowski’s favorite number. His first win of the season came just after his 5th start in the potent 84y. “I couldn’t ask for a better car. The car was fast no matter what I did or where I put it.” Matt Cole, Mike Schane, Tommy Collins and Mike Nagel jr. would round out the top five.

Tommy Groover returned to victory lane giving the driver the most wins of the 2017 season to date. It hasn’t come easy for the factory stock competitor but with determination, it is paying off. ”I can’t thank my crew enough for getting me here tonight. We didn’t even have a rear in this beast this morning. It was a tight schedule to get here today but it worked out” smiled Groover.

The 4 cylinder division had a first time winner for Penn Can Speedway. Phil Burns has had over 40 wins at his weekly track.” It’s awesome to win one here. The difference in size and how different this track is to my home track makes it a challenge. I know Mike Robinson and Nick Kennedy are in a tight points battle. You never want to come and interfere with that.”

Next up on the schedule is the Xcel Chassis 40 lap Spectacular. The Carl Kithcart Memorial will have an increased purse for the event. Willow Run Foods will also be holding a job fair by the main gate on September 15th starting at 5:00 pm.