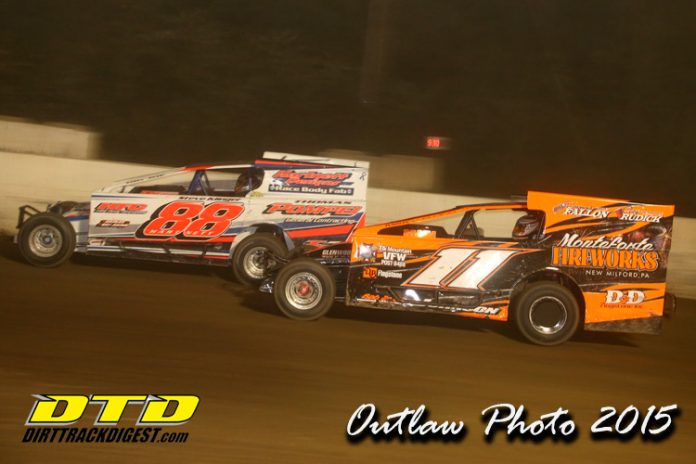 SUSQUEHANNA, PA – A season that can only be dreamed of is becoming reality for Dan Pompey. The #11 team and driver have worked hard the last 15 races to get where he is today. He has not finished out of the top 4 this season, which is no easy feat, making him the current points leader. The competition this past Friday, Sept 15th at Penn Can Speedway was no exception.

Grant Hilfiger decided to load the “old” girl up and head back to the speedway. He was quick to pick up where he left off with a heat win putting him and 2016 Modified champion Alan Rudalavage on the front row. Rusty Smith decided it was worth a second go at it staring in the 10th position.

Thirty laps of pure modified power held off a fast rolling blanket of fog. What no one could do was hold off Dan Pompey. One caution would have the leaders dodging lap traffic. Pompey caught the Pompey finished leader, Hilfiger, by lap #18. After taking over the lead, Pompey never looked back.

Mike Schane put a stamp on the 2017 with hs win Friday night. Devon Zona finished second with Ray Leanord having his best finish bringing home the popular #3r to a third place finish.

The 4 cylinder division has been a tight points battle since the season opener. Mike Robinson has a 45 point lead over Nick Kennedy. Joshua Wilder stays within striking distance with 65 points. Jeremy Warren has a tougher but not impossible chance at a difference of 140 points. This division is far from over.


24 Xcel 600 modifieds were on hand to honor Carl Kithcart. Aaron Bowes held off charges from Dana Davis and Jon Josko to take home the win. The Kithcart Family, in memory of Carl, contributed an additional $50.00 to places 1st thru 10th.

“I truly miss my dad everyday. Race days are different but the same. I know he is here and would be humbled. I want to thank Doug, Joanne, John and my family and crew for a great night. It was nice to see my extended racing family honoring my dad.” stated Chris Kithcart.

The Factory Stock division continues to grow as a class. Current points leader, Chuck Culbertson, drove the #8c to victory after a battle with Brady Simpson and Ned Fitch. Jim Sykes and Andy Brigham would be disqualified for illegal rears.

Penn Can Speedway will crown Champions in two weeks. September 29th will close the points season. The King of the Can weekend will officially close the 2017 season on October 13th and 14th.