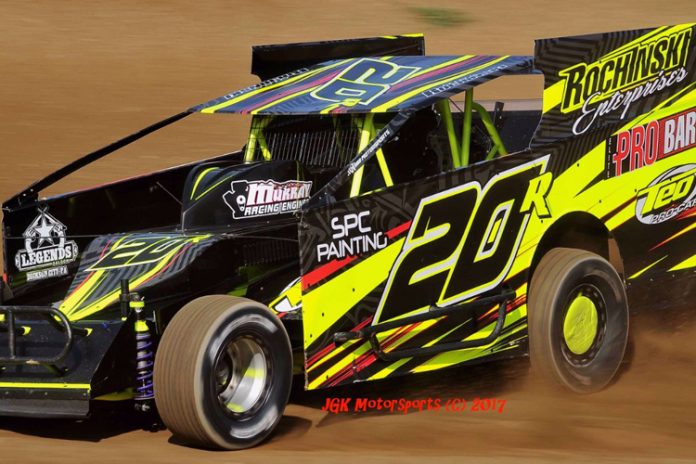 SUSQUEHANNA, PA – One of the most frustrating seasons has officially ended at Penn Can Speedway. First year Promoter, Doug Borger, hosted 129 cars this past Saturday October 14th for King of the Can. Dickson City resident, Nick Rochinski, continued his reign of Penn Can for the second year in a row. “It is so cool to be here again. We worked hard dialing the car in. It was just missing something and I have to say Kyle and my crew are the best.” Stated Rochinski.

The popular Rochinski Enterprises #20r is a familiar in the northeast corridor and most nights can be found in the top 5 at any track. Penn Can regular, Kevin Hartnett, is always a top threat and didn’t disappoint the crowd of over 500 fans in the grandstands. What was supposed to be a 50-lap feature turned into a 1 lap drag race for the top two.

Rochinski and Hartnett were scored the only two leaders of the race. Hartnett took the lead out of the box but Rochinski quickly grabbed the top spot by lap #5. Rochinski grew a comfortable lead up until lap #30. Hartnett showed why he is called the stalker staying within striking distance of Rochinski.

The last 10 laps had Mike Colsten work his way to third with Brian Malcolm and Frank Yankowski rounding out the top five. Meanwhile the leaders had a battle of their own. Hartnett found himself on the bumper of Rochinski with five to go. By lap #47, Hartnett tested the extreme bottom putting him into position to set up a final run.

The two veterans put on a show for the fans with a final drag race to the finish with Rochinski closing the deal for the family owned Pro Bar #20r. “Hartnett is tough to beat. Racing him is good, clean racing. I’m so glad Carter and Myla could tough it out and come to victory lane. Michelle and I are lucky and the support of family is everything.” Stated Nick as he adjusted the crown of a king.

The 2017 modified champion Dan Pompey saw his night end early with a broken front axle after a tangle on lap #4. At the beginning of the night, Pompey along with 602 Sportsman champion Mike Schane, Factory Stock champion Chuck Culbertson and Xcel 600 modified champion Bailey Boyd were honored with a parade of champions and brought the flag to the front stretch for the National Anthem. 4-cylinder champion Michael Robinson couldn’t attend due to a prior commitment. He will be honored at the banquet in the future. An emotional Pompey thanked his crew and family for the support this year and throughout his career. As anyone knows, racing can go the lowest of lows and the highest of highs. Dan Pompey and his team truly earned the title and look forward to representing Penn Can Speedway in the future.

The GRIT 602 Series made its second appearance of the 2017 season. Tom Collins jr. and the 713 crew found what works at the speedway. Collins has won the two shows and looks forward to the 2018 season.

The Factory Stock division has had the most multiple winners of the season. Stephen Simpson edged out Tommy Groover by half a car length. Invader Lanson Albanese rounded out the top three.

The wingless 602 Sprints thundered their way around the track. Spectators were treated to some side by side sprint action. One can only imagine what the valley will feel when a full field of the sprints roll into town. Brody Adamsky was styling in victory lane with his crown and cape fit for a king.

The 4 cylinders have had the closest finishes of the year. Tonight would be no exception as the #28a of Adam Gilbert just edged out Nick Kennedy’s triple 7’s at the line for the win.
The Xcel 600 modifieds were on the card for two features. The held over feature from September 8th would be run and decide the 2017 champion. Bailey Boyd and the popular #163 ended the season with a win and his first 600 modified career championship. Celebrations were short and sweet as the team got ready for a full night of racing.
The Xcel Chassis tour had 35 modified on hand searching for the crown and victory lane. The Xel Chassis North Tour would also crown the 2017. Richie Hitzler held off DJ Hunt for the trip to victory lane. Aaron Bowes was declared the Tour champion.

The 2017 season is now in the books and Penn Can Speedway looks forward to 2018. Doug Borger talked of his first season at the helm of the speedway. “This year has been a learning curve. So many things were thrown our way. The weather didn’t help anyone in the northeast. We will be doing some renovations to the track and grounds over the off season. I expect Penn Can to thrive in the future so we will fix what we need to fix, tweak some systems and get her ready for 2018. We will be at some shows over the off season. You can check for updates on our website at penncanspeedway.net”

FEATURE RESULTS – KING OF THE CAN