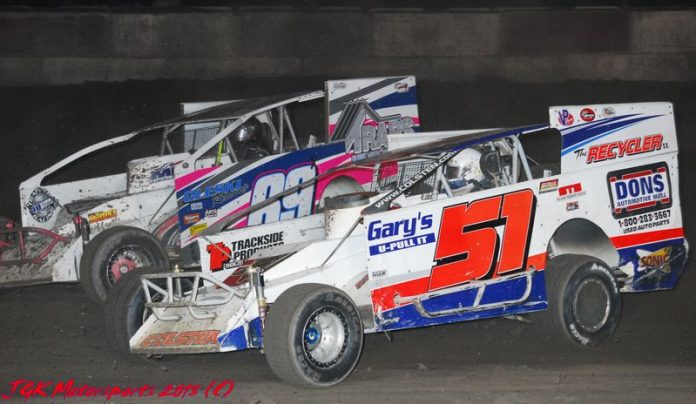 SUSQUEHANNA, PA – The 2018 season will see traditions continue with an emphasis on making “Penn Can Great Again”. First and foremost, will be the return of the Xel Chassis 600 modified weekly program. The series is on an upward swing in the area and looks to continue the trend. “The cost of getting into the series is a factor when people buy a car. I think the biggest factor is the cost to race and maintain throughout the season. We will have some special shows for the weekly division and some tour dates will be on the schedule.” stated Doug Borger.

The Factory stocks will make a return to the track. A rules meeting as been set for Dec. 2nd at 2:00 in Susquehanna, Pa. at the American Legion #86. The division had some of the best and closest racing all year. The class continues to grow with new drivers looking to enter for the 2018 season. The meeting will be open to the public. Please feel free to contact PCS promoter Doug Borger if you are unable to attend.

Modifieds and 602 Crate Sportsman will also be a part of the weekly program. New incentives will be released over the off season for the popular divisions. American racer tires and Sunoco fuel will continue as the track choice for the 2018 season.

The popular 4-cylinder division will see new faces in the upcoming year with some drivers moving up to another division. You can still expect the competition to be some of the best in the area. Could we see an influx of young guns giving the veterans a run for their money? A rules meeting will be announced shortly for the 4-cylinder division.

Something new for 2018 will be the return of the street stock division. A lot of interest was expressed thru out the 2017 and before the King of the Can for the long-awaited return. Promoter Doug Borger talked of his decision to add the division to the weekly program. “I not only heard from drivers about returning the street stock division but from a lot of fans. On race nights, I try to get to the grandstands and get a feel for what the fans are looking for. There is no denying the passion racing brings out in people and bringing the street stocks back to Penn Can had to top the list for the 2018 season”.

Reconstruction at the track will be started within the next 2 weeks. As you may have noticed, the front stretch wall was collapsing around the flagger’s stand and stairs. Plans are to have the front stretch wall pushed back a few feet and new stairs will be put in. Construction will also resume on the shorter track where the Xcel Chassis junior modifieds will be running. Information and pictures will be released soon for the 6 yrs. and older division.

The Spectacular races for each division will be back on the card along with Bike Night, Nostalgia Night, Back Pack Night and Fan Appreciation Night. New shows will also be added and of course King of the Can will be the final show of the season. The schedule will be released within the next few weeks.

New for 2018 will be the procedure for feature redraw for all divisions. A driver is eligible for the redraw if he qualifies in the top three and must have attended 50% or more of the races for the current year. If that driver is not eligible, the first alternate will now be eligible. The “invader” would then start as the first car after the redraw cars. Starting in 2018, The feature winner from the previous week can start no better than 9th on the next race night. This includes all the weekly divisions.

More news will be released as the off season progresses and we move closer to the opening of the 2018 Penn Can Speedway season.