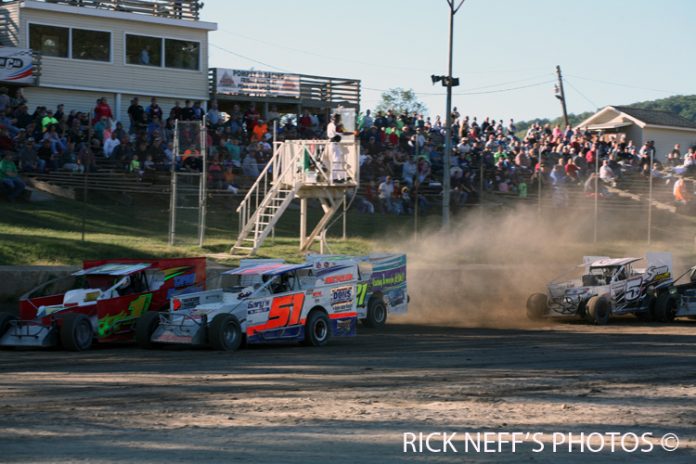 Uncertainty bloomed in late March when word got out that the current promoter of the Susquehanna, PA based dirt track, Doug Borger, had decided he was stepping away from promoting the facility. A major void was left and the timing of the situation was also very problematic.

The news spread at the Speed Sport Showcase car show in Scranton. Alan Rudalavage took to the stage that Saturday evening at the show to try to quell the fears that the speedway, which has operated for nearly six decades, might have ran it’s last race. Alan spoke to a few hundred race fans who gathered at the front of the stage, stating the rumors were true, but individuals were organizing and an effort will be made to save the Can. While it’s no secret the track has struggled the past few seasons, no one believed the place would close. This time it felt a little different. Optimism wasn’t as high and morale was clearly low, especially from those who have supported the place through it’s darkest days.

For the next few weeks, more rumors circulated regarding who might step up, but with Doug still technically in control of the track, updates were hit and miss as news could not be posted officially about what was going on. Thankfully, all sides have come to an agreement. Penn Can has found its new promoter and a new lease on life.

Enter Chad Towner, 37, from Susquehanna. Chad will take on the day to day responsibility of overseeing the track’s operations as the 3rd new promoter of the facility in the last 4 years, following Mr. Borger and Dan Harpell.

Towner, who’s family has been part of Penn Can’s racing history for generations, is committed to turn the tracks fortune around and hopefully leave his own mark in the history books of Oakland Township. Towner understands the effort that will be needed and the 2018 season will be a chance to correct and improve.


Chad might be the sole promoter, but he definitely is not the only one who has helped over the last several weeks. A group that includes his wife Kristen Towner, Joanne St Onge Mady, Butch Getz, Alan Rudalavage, Chris Maby, Steve Tourje, Gary Folk, Bryan Chase and many others have all contributed to keeping Penn Can Speedway afloat.

The Beavans, who are the long-time owners of the speedway, have helped greatly in this process as well. Per Chad, the transition was done as smoothly as possible. Chad credits Al and his family as great people and is looking forward to working alongside of them.

Immediate work will begin on finishing the front stretch wall and making some structural improvements to the tower. There is some wiring and lighting work that also needs to be done. After that its all hands on deck with getting the track to the point that it’s race ready.
More help is always appreciated though. Penn Can officials will be planning a public work day. Anyone who would like to dedicate a little bit of their time and help do some spring cleaning around the facility would provide a big boost to the track and possibly allow the place to open sooner. This date will be announced very soon!

Continuing on with the track prep topic, it will be a huge focus as there is no time at this point to make any major changes to the surface. The new team at Penn Can is committed to providing the best surface they are capable of. Getting the gremlins worked out of it will be the biggest challenge. It was evident last season when the track is prepped well, Penn Can still had a decent surface to offer and will not consume tires at an alarming rate. That’s the short term goal.

While major changes are not expected as far as format, weekly divisions and schedule, everything will be reviewed by the new management. Small changes to the schedule will need to be made as some races have been lost. That revision will be available shortly and also dates regarding the season opener will be released. Classes that were announced for the 2018 season will be looked at and the decision regarding their status as a weekly class will be determined. Look for an announcement for all of that as soon as possible.

The Facebook page and the website (penncanspeedway.net) will operate as normal and will not change. Updates to the website however will be sweeping, as information is changing from one group to another

Please keep a watch on our Facebook page for all upcoming announcements until the website is brought back up to speed.

Chad, his family and his crew would like to thank you for your patience throughout this entire process and the hope is that we can see you at the track in 2018!