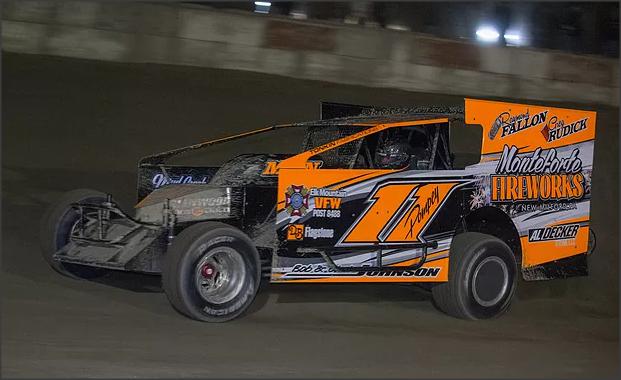 SUSQUEHANNA, PA – Who would have thought just three short weeks ago, that on May 11, 2018, the doors would open on the 2018 season at Penn Can Speedway. A new chapter was started with some familiar and new names in victory lane and new divisions added to the program making their debut last night. Drivers were provided with a racy track, fans were provided a smooth program and great food. Chad Towner, Penn Can promoter, attributed the nights success to his team, crew and the local communities. “I can’t say enough of how everyone has pulled together to open the gates in a short period of time. We had some bumps in the road but nothing we can’t learn from and make better” stated Towner.

Dan Pompey (2017 Modified Champion) made an early statement picking up where he left off last season. After the redraw, Pompey would start P1 along with Steve Davis. The first of two cautions had Allen Rudalavage on his bumper. The 5J of Joey Grammes was not to be denied. A multi-groove track came in halfway through the 30-lap feature. Rudalavage and Grammes were fighting hard giving Pompey just the cushion he needed. Grammes worked his way past Rudalavage with 5 laps to go, set his sights on Pompey but would run out of laps. Precision Hydraulic & Oil sponsored a $200.00 hard charger award that was earned by the #31 of Danny Solomon. They are an authorized distributor for oil, hydraulic hose and valves, and batteries. Check out their complete line of products on their website at precisionhydraulicoil.com

602 Crate Sportsman driver Moose Gulley stepped up his program and the hard work over the winter paid off in a big way. Gulley earned his first career victory. Each lap saw the M14 powerplant hit every mark with Mike Nagel jr. waiting to take advantage at any moment. Nagel knocked on the door of the family owned M14, but Gulley held off the hard charger.
The Four Cylinders saw Jimmy Difulvio take the checkers over Rich Wagner and third place runner Chris Taylor. Rich Wagner was the winner of the $30.00 hard charger award sponsored by an anonymous fan.

The 600 cc. Modifieds had a great outing. The “outlaw” Jamie Frantz was back in his familiar #11 after shaking down the Doug Lattner owned #101 on practice day. Rich Green, car #35, took his first win by inches over the McDonalds sponsored Lattner machine.
Excitement was in the air as the Street Stock division returned to Penn Can Speedway. The KP1 of Doug Polhamus, Grayson Albanese and Steve Polhamus put a race on that did not disappoint the fans.

The 300 cc. junior division debuted its first car. At the helm was young gun Travis Rooney. Travis looks to follow in his dad’s footsteps. As Paul Rooney stated, “These kids have to start somewhere. You have to learn to walk before you can run”. Running with Travis, was Trevor Houghton, shaking down his slingshot ride for the 2018 season. Both kids had a blast at the end of the night. Our new generation of drivers had a debut that memories are made of.


The Factory stock division saw a busy night as bonuses were added to the purse. Towner Motorsports has sponsored $50.00 to the winner for the 2018 season. Nate Shay has sponsored a $50.oo bonus to the winner if they start outside the top 8. This bonus will run the full 2018 season. The nights bonuses were plentiful for the division. Conklin Racing sponsored a $25.00 bonus for drivers finishing in 2nd and 3rd place. Ziggy Racing sponsored a $20.00 bonus for each heat winner of the night. Fasset Racing team sponsored two bonuses for the night. The driver that finished in the “lucky” 13th place took home an extra $50.00. The winner earned himself a $50.00 as well. Simpson Racing sponsored a $10.00 award to the driver who finished last in the feature, as well as a $20.00 bonus to the lap 17 leader and a $20.00 bonus for drivers who finished in the 2nd, 3rd, 4th and 5th places. A one-day total of $400.00 in bonuses made for a more lucrative payout. Cyrus Homer earned himself a $300.00 payday and the win over Alicia Towner and Brady Simpson.

Penn Can Speedway returns to action May 18th with a full program and possibly a few surprises to be announced. Check out all the happenings on the website at penncanspeedway.net.