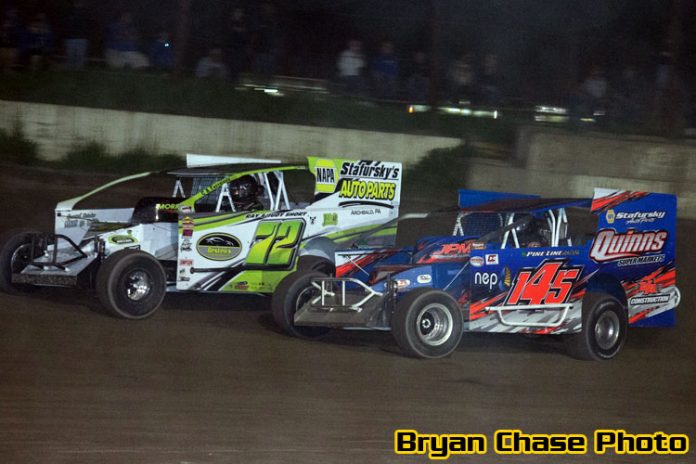 Randy Brokaw and Matt Brewer brought the 602 Modified feature to the green. Brewer jumped out quickly to the lead, but a handful of early cautions stopped any sort of continuity. Despite the early caution fever, Mike Nagel Jr skillfully used the top side of the speedway to move from his 5th starting position to 2nd in the first handful of laps. From that point on, it was showtime.

Brewer stuck to the bottom, while Nagel kept his #M7 machine glued to the top. The two would battle back and forth, lap after lap. It clean racing at its absolute finest. How long could either of these two drivers be able to keep this up for? The answer was simple in the end: The whole race. Nagel, at one point, had the momentum and kept about a half a car length lead on Brewer. But Brewer would make it interesting. With only a few laps left, Brewer would inch up just enough so that the two were racing nose to nose. Michael Schane, who had driven up to 3rd from his 10th starting position, could only sit back and watch the show in front of him, hoping one of them would slip up.

As the white flag fell, it was Brewer who had a slight edge on the bottom. The two made their final circuit around the speedway in perfect sync with one another, almost as if it were all scripted. Neither driver missed their marks, but it would be Brewer who would come away with a victory by only inches over Nagel. Everyone was on their feet at this point and cheering the two drivers who just put on a clear candidate for the race of the year. Kam Maby, who looked much more comfortable in his car, managed a solid 4th place and Nick Branning held on for a top 5 finish.

In the Modifieds, Nick Petrilak and Alan Rudalavage led the field around the 4th turn to the green flag. It would be Petrilak jumping out front first in the early laps over Rudalavage. A caution flag flew and Petrilak would choose the outside on the restart. Rudalavage was forced to the inside.

Rudalavage would stay with Petrilak on the restart, eventually taking the top position away. Rudalavage had his modified working well on all parts of the track, opening up a good lead over Petrilak. But things would start to heat up behind them, literally. Dan Pompey would exit the race early as smoke could be seen pouring out of the rear of the car, ending his evening. Kevin Hartnett was the man on the move though. Hartnett, who started 9th, had his car up to 4th.

A few late cautions regrouped the field, giving Petrilak a final shot at Rudalavage. Petrilak switched to the low side, but Rudalavage was not going to be denied a win on this night, as he took home his first checkered flag of 2018. Nick Rochinski, who has struggled mightily this season, really had his Rochinski Enterprises TEO Pro Car hooked up, looking like the King (of the Can) we all remember. He made the race for 2nd place a good one. Petrilak and Rochinski were neck and neck coming around for the final turns, but Petrilak would barely hang on to 2nd by less than a half a car length over Rochinski. Hartnett, who was right behind both of them, finished 4th and Joey Grammes cracked the top 5 from his 10th starting position.

Rudalavage, one of the more colorful talents Penn Can has to offer, praised the job the track prep crews did throughout the evening, stating the track was smooth, had a good amount of bite and that the dust was a non-factor.

Shane Wolf Jr proved he’s the man to beat in the Street Stocks once again, as he became the first repeat winner on the season. Wolf, who was in an early jingle after moving up a few spots from his 8th starting position, had to restart right back there in the same spot. He would claw his way back up, setting his sights on a very fast Earl Zimmer, who had his 2EZ machine out front after getting around Polhamus for the lead. Wolf would eventually run-down Zimmer and never look back. Zimmer would have to settle for 2nd, Doug Polhamus 3rd, Eric Beach 4th and Doug Stack 5th.

The Factory Stock race was also an emotional one as the racing was pretty clean, but many cars broke. Steve Simpson and Cyrus Homer led the crunch bunch to the green flag and Homer would shoot out to the front. However, it would not be for long as mechanical issues did the talented driver in for the evening. Tommy Groover, who started 7th and made his way up front, would also face the same fate and needed to retire early. Meanwhile, Steve Simpson was weathering the barrage of bad luck around him and would fend off challenges from Charlie Towner and Nate Hill. Simpson would hold on for the win in the end, claiming his first victory of the season. Towner, Hill, Ned Fitch and Alecia Towner would round out the top 5.

Joshua Wilder, who had no intention on racing this evening, was watching from the comfort of a lawn chair at the beginning of the night. A quick change of heart had him call a friend, who would tow his 4-cylinder racer to the track in time for their feature event. This ended up being a wise decision, as Wilder would end up with his first win of the year at Penn Can. Nick Kennedy and Chris Taylor gave chase, but it wasn’t enough. David Fox Jr and Bryant Beach would finish 4th and 5th.

In the 600cc Modifieds, Doug Lattner used his pole position to propel him to his first victory and his first at Penn Can in 2018. Lattner led every lap, despite Jared Green staying with him early, it wasn’t enough. Green and Dakota Anderson would battle for 2nd off and on, with 2nd eventually going to Green. Anderson would finish 3rd and Chace Scutt 4th.

NOTES: Bike Night is scheduled for June 22nd. Right now, there are 120 bikes & 30 helmets ordered. Just like in year’s past, these will all be given away to the kids who are in attendance for FREE. The goal is 150+ bikes. This event is always huge and a lot of fun for the kids. We’re looking for more sponsors, donations or individuals who would like to purchase a few bikes on their own to help us get to our goal of 150 bikes. If you can help, please reach out to the track on Facebook, on the website, or contact Gary Folk.