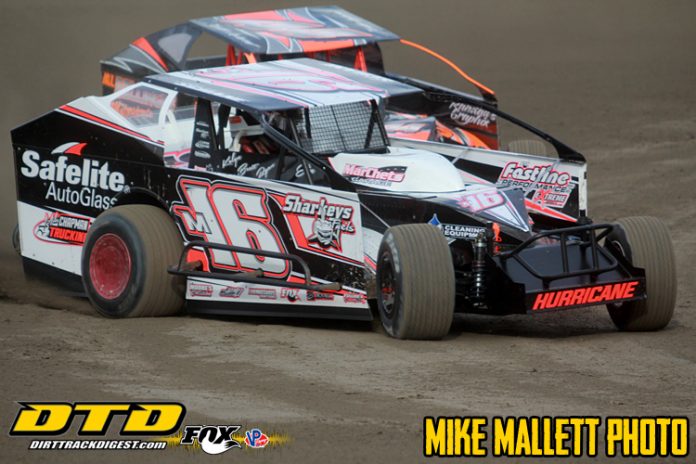 SUSQUEHANNA, PA – The Hurricane Michael Schane reminded everyone why he is a multi-time track champion and one of the best currently in the southern tier crate modified division. Schane tackled the tricky oval with confidence and stayed smooth, allowing him to pick off the competition in front of him. Ryan Stone had the early advantage and was keeping Schane at bay, but a bobble in the first corner allowed Schane to utilize the bottom of the track to his advantage and would remain out front the rest of the way. Teenager Leo McGurrin made his return to Penn Can and looked strong, taking home 2nd place. Devon Zona also ran a great race and would keep his car clean to finish in 3rd. Mike Nagel Jr uncharacteristically looped himself around in turn 2, but would battle back for a 4th place finish. Rounding out the top 5 would be last weeks feature winner, Matt Brewer.

In arguably the most entertaining feature of the evening, Brady Simpson would pilot the family-shared #B17 machine to his first win of the season in the factory stock division. Steve, Brady’s brother, picked up the win in the same car last week.

Brady, who started 6th, kept to the bottom of the track and had his car working very well. Coming out of 4, he was by far the fastest car on the track. Tommy Groover, who had been struggling as of late, had his car charging in the top 4. While the car was still not 100% by feature time, he would battle a tough track and manage to bring it home 4th. Dusty Decker, who started way back in the pack, drove a fantastic race and would pilot his machine all the way up to 3rd while challenging Cyrus Homer, who kept it calm and steady for a 2nd place finish. Sheldon Whitman ran his best race of the season. Whitman, who moved up from the 4-cylinder division, had his #4mk full fender firing on all 8 cylinders and would finish an impressive 5th.

Michael Robinson dominated the 4-cylinder feature driving the #3JD for week 1 feature winner, Jimmy DiFulvio. Robinson, who started on the pole, was in a different dimension as soon as the green flag fell. Chris Taylor and Michael Brown battled back and forth and tried to give chase, but Robinson had too much on this night. Taylor would bring it home 2nd after starting 7th. Brown would finish 3rd after starting 8th. Bill Burns and Joshua Wilder finish 4th and 5th.

Doug Polhamus cruised to his 2nd win of the season in the street stocks. Polhamus and Doug Stack brought the field to the green and Polhamus jumped out quickly to the lead. Shane Wolf Jr, who had to come from the back yet again this week, ran out of time as Polhamus had too strong of a car to run him down in the end. Wolf would have to settle for 2nd. Doug Stack 3rd. Street Stock rookie Keith Beach ran his most complete race of the season and would bring home a 4th place finish and Eric Beach rounded out the top 5.

Doug Lattner had the golden arches flying high in the 600cc main, as he collected his 2nd victory in 2018. Lattner, who battled with Green early for the lead, would get out in front and stay there. Jared Green would settle for 2nd and Dakota Anderson 3rd.

Travis Rooney would collect the kids A-Main event with Calvin Wheelock in tow.

Surface issues plagued the evening and sent track crews scrambling to find solutions. As a result of the uncooperative earth, the modified drivers elected to postpone their feature event. The modifieds will now run double features next Friday night, June 22nd.

Next week is the wildly popular Bike Night, presented by Gary Folk! There were be over 120 bikes to be given away along with a few dozen helmets. Get to the track early and be sure to get your little ones entered to win. And as stated above, double modified features will be run – which should be quite the treat for a big crowd.

Updated points have been posted on the Penn Can Speedway facebook page. The website will be updated by Monday night.