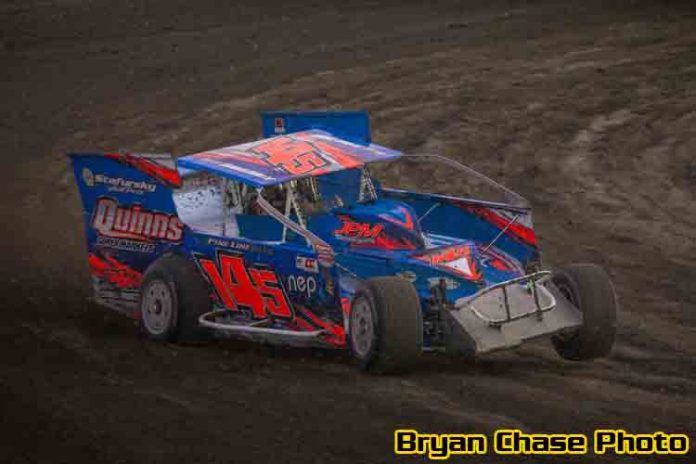 SUSQUEHANNA, PA – Butch Getz and Alan “Hollywood” Rudalavage brought the Modified main down-around 3 and 4 to the green flag. H-Wood would jump out to the lead early as Getz would look to chase him down and reel him back in, but Rudalavage would stay as smooth as he could through the tricky turns. Getz would eventually bobble and lose ground. Nick Petrilak was on the move from his 6th starting position however. Petrilak would soon crack the top 3, setting his sights on the 145 machine.

Petrilak hustled on the top side of the speedway, eventually catching Rudalavage and would challenge for the lead. Unfortyunately a caution would fly just before the halfway point. Rudalavage would choose the outside, making Petrilak run the inside. This would be key as Petrilak would bobble going into 1 and 2, allowing Rudalavage to regain position and distance. As the laps ticked off, Petrilak would once again make a charge towards the front, but he wasn’t alone. Kevin Harnett would emerge and join the party, making this a three-way battle. The Stalker picked his lines on the tough track like the savvy veteran he is and would pull-up along Petrilak on many occasions throughout the feature. Petrilak was stronger on the straights though, which allowed him to power back around Hartnett exiting the turns.

Rudalavage would pull away from the pack in the final few laps to secure the win. Petrilak would hang on for another 2nd place finish and Hartnett would finish a close third. Dan Pompey would bring his machine home in 4th, while Brian Malcolm finished 5th – once again showing his talent as a wheelman by having to work through a lot of traffic to get there.

In the 602 Crate Modifieds, Tom Creed would blister the field, lapping up to almost the top 5 and seemed to have picked up his first win after a two-decade hiatus from being behind the wheel. Unfortunately for Creed, he would not make it through tech inspection. This meant that the victory now went to the runner-up, who just happened to be Michael Schane. Devon Zona would be bumped up to a 2nd place finish. Zona has looked very strong in the month of June. Even with the tricky track conditions, this young man has been hanging tough with the front runners now for a few weeks. His win could be right around the corner. Ray Leonard had his machine flying & would get credit for 3rd. Randy Brokaw and Mike Nagel Jr would be credited with 4th and 5th respectively.

Due to the DQ and Michael Schane now declared the winner, Schane has won 3-in-a-row. That means a bounty is now in effect! Just like all of last year, whenever a driver has a 3 week winning streak, Penn Can will bump up the pay in that class. Next week’s crate winner will see an increase of $150.00 as a result of said bounty. The only stipulation being that the driver who has the bounty placed on them (in this case – Schane) must finish on the lead lap!

Dusty Decker finally broke free and collected his first career win in the Factory Stock division. Decker, who has been a front-running contender all season, just needed a little luck thrown his way to complete his pursuit of victory.

Decker had his full-fender out front early and would battle with Brady Simpson for a handful of laps. Simpson would not be able to reel Decker back in though. After a mid-race caution, Decker would firmly stay out in front. Decker would fly down the front stretch to grab that much sought after checkered flag. Simpson would hang on for a solid 2nd place performance. Nate Hill looked great on Friday evening as well. He had his machine hooked up well and made plenty of moves to bring it home in 3rd. Alecia Towner took 4th place honors and Cody Fasset would wheel the former Nate Shay ride to a 5th place finish.

Denny Decker would join his son Dusty in victory lane for an emotional 1st career win celebration. The car that Dusty is currently driving was in fact Denny’s. It is the same car that Denny was sadly paralyzed in a handful of years ago. Congratulations to Dusty on his win and we’re sure the racing community is loving every moment of it just as much as we are. A great victory for a well-respected racing family.

Dakota Anderson drove to his first 600cc Modified victory. Jared Green would battle with Anderson early, but Anderson would pull out ahead. Multi-time feature winner in 2018, Doug Lattner, worked his way up to 2nd and would attempt to give chase, but Anderson was able to stay out front and would not be denied his first trip to victory lane. Lattner would stay the course in 2nd. Green, Todd Titus and Chelsie Beebe rounded out the top 5.

Nick Kennedy proved to be too much to handle once again n the 4-Cylinder feature. Chris Taylor battled with Kennedy early, but Captain Quick did Captain Quick things and made quick work of the 4-banger feature. Taylor would truck along to a 2nd place finish. Wilder, Salmini and Gumaer would round out the rest of the field.

The Street Stock feature would see the field come down to the father-son duo of Doug Polhamus and Steve Polhamus. Both Shane Wolf Jr and Keith Beach would retire early due to mechanical issues. Doug Polhamus would collect the win in the end over his father Steve.

Next week 7/6/18: Penn Can Speedway is proud to announce the return of the “Fireworks Extravaganza!” The super-popular event has thrilled spectators for years at the speedway. After a one year hiatus, the event is proudly returning to once again provide the “ooohs and awws” just like it always has in the past. Be sure to get there early as seating is typically at a premium.

And as mentioned above, the 602 Crate Modifieds will race for an extra $150 to win as Michael Schane has been slapped with a bounty. Schane must finish on the lead lap for the bounty to count. The bounty will roll over week-to-week until claimed (if need be).

Be sure to follow us on Facebook (@Penncanspeedway) and also on the web at www.penncanspeedway.com to stay updated with the news at happenings at the track!