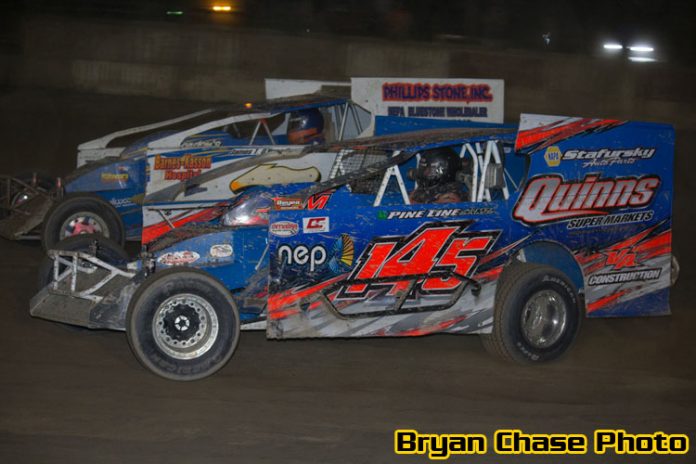 SUSQUEHANNA, PA – Alan Rudalavage extended his points lead on Friday night by capturing his third victory at Penn Can Speedway this season. The veteran driver jumped out to the lead early, grabbing it from Brad Shaffer, who won his first heat of the season earlier that night.

As the laps ticked off, Nick Petrilak rallied from his 4th position up to 2nd, battling with Dan Pompey and Kevin Hartnett along the way. Unfortunately for Petrilak, there would be no NASCAR-style debris caution to help him out, as the modifieds went all 30-laps under green. Rudalavage would prove to difficult to catch, stretching the track of the feature event in dominating fashion. Petrilak settled for 2nd, Pompey 3rd, Hartnett 4th and last week’s feature winner, Mike Loney, rounded out the top 5.

The 602 Modified main was a good one. Mike Nagel Jr and Randy Brokaw lead the field to the green flag and Nagel would power out in front. Nagel would continue showing the fast way around the track for many laps, but Michael Schane was on the move from his 4th starting position.

At about the halfway point, Schane began to challenge Nagel for the lead. Nagel had his machine flyin’ on the bottom while Schane worked the top side. This battle would continue for a handful of laps, providing some great racing by two of the best at Penn Can. Schane would eventually pass for the lead and earn his 5th win of the season. Nagel would bring it home in 2nd. Randy Brokaw 3rd, Leo McGurrin 4th and Moose Gulley 5th.


Nick Kennedy is a man on fire. The driver of the dominate #N2 4-banger started 9th in the field and methodically picked off car after car to secure his 3rd victory in-a-row and his 4th on the season.

Joshua Oles, who hauled all the way from Greenwood, NY, started 5th and would work his way into the lead after battling around Chris Taylor and Kenny Underwood. Oles looked to have the car to beat, however Kennedy had different plans and defending his home turf was priority #1. Kennedy drove the rails off his car up to 2nd and would fight with Oles for the lead, staying right on his rear bumper before finally working around him for the lead. Oles would lose it in-between turns 1 & 2 though and would need to rejoin the field at the rear. Kennedy would go the rest of the way unchallenged.

Chris Taylor would continue his consistent season with a another solid 2nd place finish. Brian Salmini stayed smooth to claim 3rd and Joshua Wilder in 4th. Oles would race back up to 5th in the end.

Next week, the 4-Cylinder division will be racing for an extra $100 to win as there is now a bounty on Nick Kennedy. Can anyone cool off Kennedy?

The Street Stock main was quite the race to watch. Doug Polhamus and Eric Beach thrilled the crowd lap after lap. Polhamus, who has been a rocket in 2018 at Penn Can, took the lead early from his dad Steve. But Beach wasn’t going to let Polhamus get away so easily this week. Beach, piloting the George Miller Jr owned 77, had the car operating the fastest it’s been all season. Beach worked the bottom groove trying to get a run on Polhamus and would take the lead briefly in spots, but Polhamus had the top side dialed in and powered back each and every time.

The two would continue racing this way until the very end. All Shane Wolf Jr could do was watch from the comfort of 3rd and wait to see if either of them would slip up so that he could pounce.

Polhamus out-dueled Beach in the end, earning his 4th win of the season at Penn Can. Beach would take it home in for a hard-fought 2nd, while Wolf would have to settle for 3rd as the checkered fell. Steve Polhamus 4th and Matt Bowman, who had mechanical issues, was credited with 5th.

Dana Davis and Adam Mudge brought a good field 600cc Modifieds to green flag. Davis and Mudge would battle early, but Dakota Anderson was the man on the move in the back of the pack. Anderson, who started 10th, worked his way up to 2nd and appeared to be running the leader down. Unfortunately, his night would end early with problems.

This set the stage for a good battle between Jamie Frantz and Adam Mudge. Mudge was fast all night long, but Frantz had a little more as the laps counted down and collected his first win on the season. Mudge would need to settle for 2nd. Dana Davis cruised home in 3rd followed by Paul Deruyter and then Jared Green in 5th.

Alecia Towner and Dusty Decker brought the 12-car Factory Stock field down to the green, and Towner took the early advantage, but Decker would battle back on the following circuit. A caution would come out on lap 1 however. The crunch bunch lived up to their nickname as they had their share of caution fever early on. It was tough sledding at the get go as Friday the 13th seemed to come alive during the last race of the evening.

At one point, Cody Fassett took to the high side, trying to get around some of the cars in front of him making it a tight 3 and 4-wide race down the backstretch. Disaster would strike as the cars would bobble fighting for racing room. This pushed Fassett up high into the barrier and would result in him flipping several times down the backstretch. Thankfully the driver was OK, but his car was left battered. A few laps later, Sheldon Whitman’s machine went up in flames. Whitman was running 2nd when bad luck took him out.

As racing resumed, Tommy Groover showed why he is the man to beat at Penn Can. Groover piloted his way up to first place from his 8th starting position. Groover would earn his 4th victory of the season by the time racing came to an end. Both Brady Simpson and Nate Hill also managed their best hard-charging performances of the season. Simpson, who started 11th, finished 2nd and Nate Hill who started 12th, finished 3rd. Dusty Decker and Dustin Fassett rounded out the top 5.

NOTES:
Penn Can Speedway is pleased to announce that Sunoco Race Fuels distributed by Insinger Performance has signed on as the official associate sponsors for the Modifieds, 602 Crate Modifieds, Street Stock and Factory Stock classes.

New street stock rules are finished and will be posted as soon as possible.

And as mentioned above, there is a bounty in effect for next week on Nick Kennedy. A cool $100 extra will to go to the winner if you can beat him. Kennedy must finish on the lead lap.

NEXT WEEK:
Next Friday, July 20th, marks the annual Pappy Beavan Memorial/Legends of Penn Can Night. Plus we will official induct new individuals into Penn Can’s Hall of Fame. Mark Terry has worked diligently on the list of new inductees and we appreciate his help!

Please help spread the word to all of the individuals and their family’s above. We would love to have everyone at the track who is able to make it.
July 13th Official Results