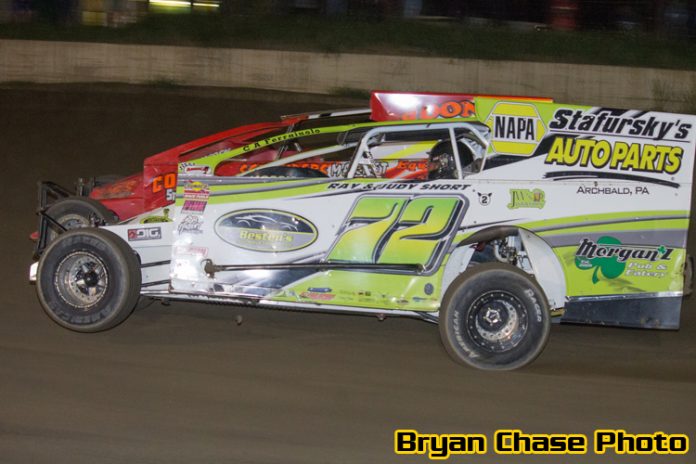 SUSQUEHANNA, PA – Hometown hero, Paul “Mickey” Rooney and Nick Petrilak from Greenfield, PA led a stout field of sixteen Modifieds to the green flag. Rooney made the most of his outside pole starting position and jumped out to the lead, utilizing the high side of the speedway. Petrilak gave chase and would pull Rooney in around the turns, but Rooney continued to impress early on by keeping Petrilak at bay behind him.

A flurry of early cautions would keep the group close however, eliminating any momentum and distance Rooney was able to establish between himself and Petrilak. Petrilak was able to get a great run on Rooney during one of the restarts though and made the bottom work just enough to clear Rooney and take the lead. Rooney wasn’t done with him though and really showed off the power plant under the hood of his 54 machine, challenging Petrilak for a handful of laps after the pass.

Behind them, there was a good battle for 3rd place shaping up. Brian Malcolm and Kevin Hartnett were squaring off. Hartnett would eventually win the position and set his sights on Rooney and Petrilak.

As the race went on, Hartnett worked his way into 2nd and Rooney to started fade back a bit. All attention would now turn to the eventual battle for 1st place between Petrilak and Hartnett. Petrilak, who has knack to live dangerously on the high side of the speedway, had the 72 on rails, keeping Hartnett out of striking distance. By lap 24 however, the two leaders had made their way into traffic and Hartnett really started to make his presence known, sticking his nose under Petrilak with a friendly knock on the door.

One massive highlight came on lap 27. Things got really hairy, like George “The Animal” Steel hairy. As Petrilak and Hartnett were racing side by side off of turn 2, they approached the 14 car of Stanley Wilkins. Wilkins, who was running the middle groove of the speedway, forced the leaders to make a split decision (literally) – Petrilak went top shelf and Hartnett chose the bottom as the two flew by Wilkins. One could only imagine what Wilkins saw and felt at that very moment. No incident occurred however, and the battle for first resumed with 3 to go. Hartnett threw everything he possibly had at Petrilak, but Petrilak was ready for him and switched lines to the bottom, forcing Hartnett to make a move up top. With 1 to go, Hartnett would come close, but Petrilak hung on coming out of 4 to secure his second victory of the year. Hartnett would finish 2nd. Mike Loney, who has a had a rocket ship over the last month, finish 3rd. Rudalavage 4th and Paul Rooney managed a solid 5th place finish.


The modified points battle is shaping up for an epic finish. With two points races left, Pertilak has taken back 1st place by 5 points over Rudalavage. Hartnett is also only 29 points back from the lead now.

In the Crate feature event, rookie John Redner hopped out the early advantage over Racin’ Ray Leonard. Redner was very strong in the early going, keeping a good distance between himself and Leonard. By lap 9 though, Leonard had gained control of the lead and started to check out from the rest of the field.

Mike Schane was working his way up though. Starting from 8th, the track champion would battle along side of Mike Nagel Jr and Byron Worthing before securing the 2nd position. Schane put his sights on Leonard and had to work hard to run him down. Leonard wasn’t having any of it though as he was able to make his car wider than what it was to keep Schane behind him.

The race looked to be in the hands of Leonard, but a slight bobble in the turns 1 and 2 with only 3 to go gave Schane just enough room to get by Leonard and claim his 8th victory of the season and 3rd in a row. Leonard settled for 2nd, Worthing 3rd, Nagel Jr 4th and Rich Powell 5th, who made his first start of the season at the track.

Tommy Groover has typically one of the fastest cars in the Factory Stock division. Tommy Groover has also been the victim of a ton of bad luck throughout his 2018 campaign, despite amassing multiple feature wins. Friday evening, Tommy’s luck turned around for the better, going from a 3rd place finish to a win in a blink of an eye.

Dusty Decker essentially had the Factory Stock main locked down and looked to cash in on the bounty that was in-place on Tommy Groover. Charlie Towner was also right there on Decker’s bumper the whole race, but was not able to completely pull along side Decker to challenge him. The two however, held off Groover, which is no easy task to do. Groover himself stated he tried everything he could do to get around the youngsters in front of him, but was prepared to take it home in 3rd as he just wasn’t able to get the run he needed to make the magic happen.

Magic sort of happened though, although I’m sure it could also be called misfortune depending who’s looking at it. On the last turn of the last lap, Decker had something go wrong on his machine. With no where to go and not enough time to react, Towner collected into Decker. As the two got together in the 4th turn, Groover saw the magical window of opportunity open from his 3rd position and took to the bottom of the turn to fly by and cruise down to the checkered flag for the win, claiming his own bounty. Steve Simpson made the most of the same situation and squeaked out a 2nd place finish. Decker and Towner eventually straightened themselves out to finish 3rd and 4th. Sheldon Whitman would follow in for a 5th place finish. The bounty on Tommy Groover will roll over to next week.

Chris Kithcart drove to his first 600cc Modified victory of the year at Penn Can, holding off a very hard charging Adam Mudge. Mudge really closed the gap at the end, thrilling the crowd by passing some very good competition along the way, but eventually ran out of time and would have to settle for 2nd. Kithcart had his machine dialed in and won in spectacular fashion on Backpack Night, a night in which was sponsored by his very own CK General Contracting. Dana Davis and Doug Lattner were 3rd and 4th. Jamie Frantz, who had mechanical issues in his heat race, was able to get them fixed and he drove up nicely for a 5th place finish.

In the 4-Cylinder main, Kenny Underwood was on a quest for his 100th feature win of his career and he looked to make it happen as he took the early lead. But Captain Quick Nick Kennedy played spoiler to his plans, passing Underwood for the lead and never giving him a chance to get back in it. Kennedy held on for another impressive win. Scott Miller dueled with Underwood, overtaking him for the 2nd position. Underwood would have to settle for 3rd. Joshua Wilder came home 4th and Tucker Harpell 5th.

The Street Stock feature was a barn burner! Doug Polhamus would be your eventual winner, but a great race between himself and Shane Wolf Jr thrilled the crowd for laps. Polhamus impressed onlookers with a talented display of racing. Doug credited in-race adjustments to being able to keep Wolf behind him during his victory lane interview.

Shane Wolf Jr raced at Afton Motorsports Park earlier that same evening. Wolf flew back down the interstate after the completion of his feature to race at Penn Can. Wolf was forced to start scratch, but he worked his way up to 2nd in typical Wolf fashion. Steve Polhamus, Keith Beach and Eric Bonham rounded out the top 5.

Notes:
Tonight was also backpack night. What was really cool was that every kid who was at the track tonight received a backpack filled with school supplies. Thank you to everyone who sponsored this event and who had a hand in helping fill the backpacks and get them ready for the children.
The track is wide & smooth. Cars were going 2,3,4 wide all night. If you were there, you saw some great racing with very little dust tonight.
The show moved along great tonight too. We started right around 7:15 for hot laps. We had our 7 normal features. A backpack giveaway which took around 30 minutes or so to complete. And lastly, a powder puff race. The final checkered flag fell at 11:30. Great job to crew and staff!