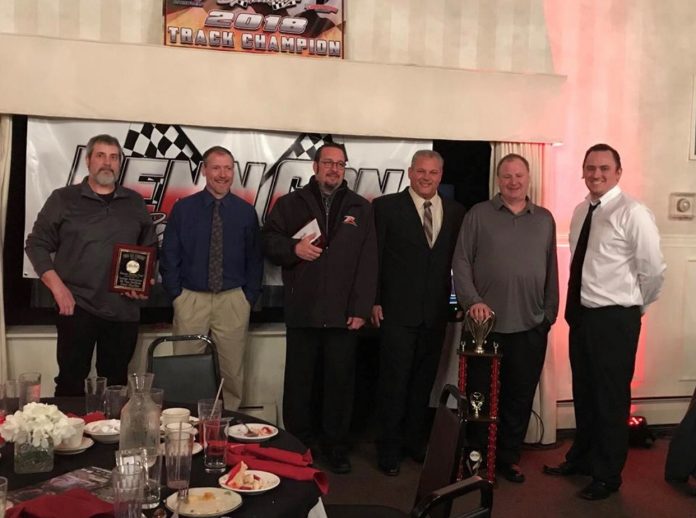 NORTH ABINGTON TOWNSHIP, PA – The Penn Can Speedway held their 2018 banquet Saturday evening at the Inne of the Abingtons. Penn Can was saved from an uncertain future by Susquehanna’s own Chad and Kristen Towner.

The first year promoter Chad Towner opened the evening by welcoming the attendees. “I can’t thank the race teams enough for their support this season.” stated Towner “When we decided to take over the track we didn’t know what the future would hold. Penn Can is still here because of you race teams and the great show you put on. As we look forward to 2019 we will be doing more fan interactions and our goal is to get you to the track and headed home as early as possible every week.” After Towner opened the night the 130 plus attendees enjoyed a buffet dinner.

After dinner Penn Can Speedway announcer Craig Hawley took over the microphone to hand out the awards. The evening culminated with Kevin Hartnett collecting his fifth Sunoco Racing Fuels Modified track championship. Hartnett overcame a 29 point deficit on championship night to best Nick Petrilak and Alan Rudalavage for the Modified crown. “We had some good luck on the final race night with those other guys having some problems.” stated 4 time winner Hartnett “We had a decent car to start the year then struggled at midseason but the car was really good at the end of the year. We had some good luck to get this for our little race team.”

Petrilak had good speed all season and won twice but wound up the season one point behind Hartnett. Veteran racer Rudalavage was a four time winner who ended up just six points shy of the title in one of the closest ever Modified title races in Penn Can Speedway history. Mike Loney was fourth in points with one win and hopes to challenge the top three in 2019. Dan Pompey rounded out the top five with one victory. Sixth place Brad Shaffer, one time winner and seventh place Brain Malcolm and ninth place Mike Nagel also attended to collect their awards.


The Sunoco Racing Fuels Crate 602 Sportsman championship went to fan favorite Mike Nagel Jr. Nagel was a winner once and he was the picture of consistently in 2018. “I have to thank all my family and for Mike Schane for missing a week.” quipped Nagel “This third championship is a little different than the others we’re looking forward to get that fourth one next year.” Michael Schane was a 10 time winner on the season but wound up 20 points shy of defending his 2017 title. Ray Leonard had a break out season in the Crate class capturing 2 victories and finished third in points. The fourth spot in track points went to one time winner Moose Gulley while James O’Hara enjoyed another season at Penn Can finishing fifth in points.

Doug Polhamus grabbed the Sunoco Racing Fuels Street Stock championship on the strength of six wins. “It was a dream come true I wouldn’t have thought it was possible a decade ago.” said Polhamus “It just goes to prove that if you do the right work things will go your way.” Doug bested father Steve Polhamus in the points chase as the father son team were a tough combination to stop. Third in points went to another mainstay at Penn Can Shane Wolf Jr. who also crossed the finish line first on six occasions. Keith Beach collected his trophy for fourth points on Saturday. Eric Beach was fifth in points in the Street Stocks.

In another exciting championship race the Factory Stock Championship went to six time winner Tommy Groover over three time winner Dusty Decker by five points. “It was an awesome season and we look forward to an even better year next year.” stated Groover “After racing for several years we found what we were lacking.” Also collecting hardware were King of the Can winner Nate Hill (3rd), Charlie Towner (4th), Ned Fitch (5th), Alecia Towner (6th), Sheldon Whitman (7th), Dustin Fassett (9th) and Steve Simpson (10th) who had one win.

Chris Taylor’s title was a special one for him in the Four Cylinder division “I love the track. I have so many memories there with my father back in the day it’s a special place.” Taylor bested Josh Wilder who won once and placed second ahead of Nick Kennedy who led the class with eight wins. Other hardware went to Brandon Gumaer who was fourth in points and Brian Salmini who was fifth.

The American Racer Tire 600cc Modified Champ was Dakota Anderson who won on two occasions. “We hadn’t planned on going to Penn Can every week but we came to shake the car down and decided to keep coming back.” Doug Lattner finished second in the title chase with two victories. Jarred Green was third in points. Youngsters Chace Scutt and Ali Scutt finished fourth and fifth respectively in point standings and collected trophies along with two time winner Jamie Frantz who was eighth in points.

The Junior Division was recognized with Trevor Houghton who also was the track’s Most Popular Driver, Kaden Ayre, Aubrey Ayre and Calvin Whitlock taking home some beautiful trophies. The Wingless Sprint Car class was also represented as Brandon Clapperton was recognized for his attendance at the track and efforts to get the affordable Wingless class off the ground.

The 2019 season at the Penn Can Speedway will start with two practice sessions on May 3rd and May 10th before the racing schedule begins with The Can Opener on Friday May 17th. Find all the latest info about 2019 at penncanspeedway.net and on their Facebook page.