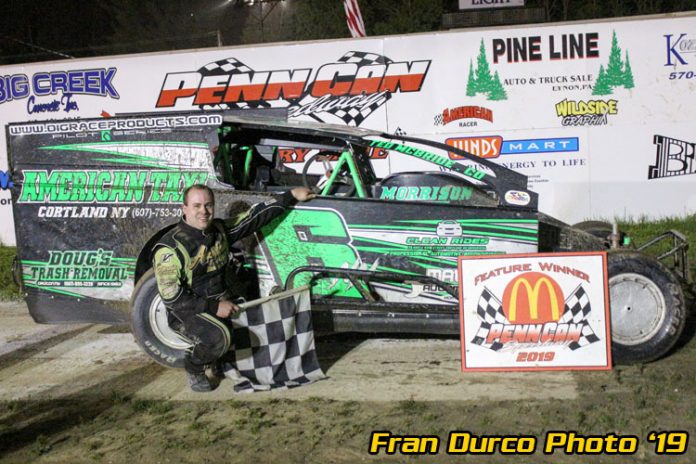 SUSQUEHANNA, PA – Nick Nye of Groton, NY bested Jeff Crambo in a wild finish to the Modified main event at the Penn Can Speedway Friday on Little League Night. Nye nosed ahead at the finish line just inches ahead to take his first Penn Can Modified victory in his No. 6NN Morrison powered Hig-Fab.

“I knew we had one chance to get a run on the top I think he protected the bottom a little too much and we were able to get to his outside.” stated Nye “We couldn’t get to him on the bottom it took too long to a good enough run down there. On the final restart I was able to get enough momentum to pull off the pass.”

Mike Schane picked up the 602 Sportsman win for his third win of the season while Shane Wolf got his third win in the Street Stock division also remaining unbeaten at the Can is Matthew Backus in the Junior division. Dusty Decker (Factory Stocks), Josh Mudge (600cc Modifieds) and Mike Robinson (Four Cylinders) all claimed their second wins of the young season. Joining Nye as a new winner was Brady Simpson in the Wingless Sprints class.

Brad Shaffer and Mike Loney led the Modified field down to the green flag for the 30 lap main event. Jeff Crambo came out on top of a brief three wide race at the start. In what turned out to be a caution plagued event, the most notable mishap was when Steven Deinhardt rolled his No. 73 car the driver was not injured. Crambo held the lead while Loney and Shaffer battled for second. Nick Nye slipped by Shaffer for the third spot meanwhile Loney had tracked down Crambo and was in position if Crambo slipped up. Crambo held the lead but he had Loney and Nye nipping at his heels Butch Getz ran fourth and 12th place starter Brian Malcolm was into fifth. As the laps clicked off Nye started to be the new challenge for Crambo to hold off. When some green flag laps were adding up Nye started to have a run on Crambo’s No.77 Scranton Craftsman ride. However the yellow flag flew on lap 25 just as Nye got to the inside of Crambo. The impressive run by Malcolm in his Grim Construction No.119 continued as he moved into third place as a green-white-checkered finish was about to get underway. Nye tried to get a run rolling around the top side of Crambo but Crambo was able to hold him off as the field was coming to the finish but just as they turned for the checkers the yellow flag flew once again. On the one lap shootout Nye charged to the outside again and this time he pulled even and nosed ahead going down the backstretch as the top two entered the final pair of turns they made some contact and continued to rub until they exited turn four. Nye nosed just ahead at the finish line in a super close finish that thrilled the crowd. Crambo was left to settle for second.


“Nick did everything he needed to do he got to my outside then we leaned on each other neither of us were lifting.” stated Crambo “I was sick when I was coming to get the checkers and the caution came out. I feel like we have a gorilla on our back with this car.”
Meanwhile Malcolm almost made it three wide at the finish but came up a car length shot of the top duo.

“It was a good points night for us we’ll take it.” said Malcolm “We only have a little body damage no big deal. They left the bottom open coming to the checkers but we were just a little too far back.”

Loney and Getz completed the top five the rest of the top ten were 11th starter Dan Pompey who pitted to make repairs after a front shock issue, 13th starter Mike Nagel who rebounded after being tangled up in a few early cautions, 18th starter Alan Kellogg who was a late arrival, Dominic Roselli and 15th starter John Morse.

The 602 Sportsman event started with Frank Payne taking the early lead with track dominator Mike Schane ready to challenge in the second spot. The caution flew as several cars bounced off each other on the front stretch suffering the most damage was Mike Nagel Jr. On the restart Schane took command after another yellow action got wild on the restart. Payne and Ray Leonard came together at the restart of the front stretch sending Leonard’s car sideways and on top of Payne’s car somehow Leonard was able to get out of this precarious position and continue moving however Payne’s car was badly damaged and done for the night. Schane led Leonard while Jeremy Williams and Randy Fox battled for the third spot. Fox moved ahead and set his sights on Leonard. Schane pulled away more and more as the laps passed while Leonard and Fox battled it out for second. In the end Schane took the win by a half lap over Leonard, Fox finished third ahead of Williams and Russell Benke.

Shane Wolf remains perfect in Street Stock competition but on this night he had to stay on his toes. Newcomer Jerry Lobdell Jr. kept Wolf close especially on the final restart Lobdell charged to Wolf’s inside but Wolf kept the power down and surged back ahead. Wolf was the winner over Lobdell, Brett Crawford another first timer, Eric Bonham and George Miller.
Josh Mudge moved ahead of Bailey Boyd at the end of the opening lap and led the rest of the distance in the 600cc Modified race. Boyd bobbled and got sideways allowing Tyler Smith to grab the runner up spot. Mudge led by a straightaway over Boyd on lap 14 when Mudge made his own mistake also getting sideways. Mudge regained his composure and went on the grab the victory ahead of Boyd, Tyler Smith, Chace Scutt and Nolan Smith.
Cyrus Homer snatched the lead from Nate Hill at the halfway mark of the Factory Stock feature. Homer crossed the finish line first but came up light at the scales resulting in a disqualification. The official win went to Dusty Decker who passed Nate Hill in the final laps to grab his second win of the season Hill was second ahead of Tommy Groover, Charlie Towner and Kevin McDonald.

Mike Robinson and Nick Kennedy put on a show in the last event of the night. Kennedy challenged early and late but Robinson held him back at every turn. Kennedy made a hard charge to the inside of Robinson on the final two laps and they even traded some paint as they came off turn four to take the checkers. Robinson kept Nick Kennedy at bay following them at the finish were Frank Kennedy, Jeremy Warren and Jason Colwell Jr.

Penn Can Speedway will be back in action Friday night June 7th for the Jeff Boughton Memorial with hot laps starting at 7 PM and racing beginning at 7:30 for all the latest updates find us on Facebook. Penn Can Speedway is located on Route 171 in Susquehanna, PA.