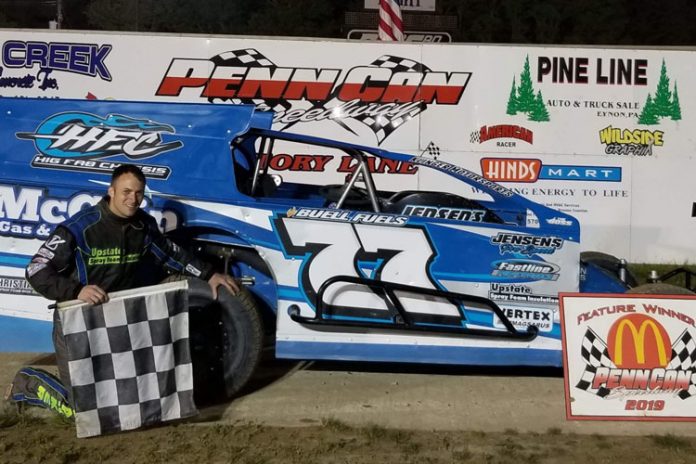 SUSQUEHANNA, PA – Last week at the Penn Can Speedway Alan Barker got his first career win and on Friday night he parked it in victory lane to become the first repeat Modified winner in 2019 at the track.

The four race winners this season captured the top four spots in the 30 lap feature event. Barker of Norwich, NY was the winner in the Steve Klinger No. 77 Hig-Fab. Nick Petrilak of Greenfield Township, PA came home second in his Sleepy Hollow Turf Equipment No. 72 while points leader Brian Malcolm of Lake Ariel, PA in the Grim Construction No. 119 finished in the third spot. Twelfth place starter Nick Nye of Groton, NY charged through the field to place fourth while Kevin Jordan of Speedsville, NY moved up from the eleventh spot to finish fifth in just his second race at Penn Can this year. The rest of the top ten were newcomer Brett Graham, Dominic Roselli, Paul Rooney, Leo McGurrin and Mike Loney.

Mike Schane of Lake Ariel, PA returned to victory lane in the 602 Sportsman event. Schane was followed at the checkers by the debuting Anthony Recchio, Mike Nagel Jr., Matt Brewer and Ray Leonard.

The Dirt Modified Nostalgia Tour made the trip to Penn Can for a special event. Bob Johnson took the win ahead of Megan Ciglich, Brad Litzenberger, Richard Ackerman and Jeff Akerman

Tyler Yeagle of Rome, PA backed up his win last week with another victory in the Street Stock division. Yeagle bested Jim Sykes, Shane Wolf, Doug Stack Jr. and Travis Brockner.
Bailey Boyd took the 600c Modified win over Tyler Smith and Josh Mudge. Dusty Decker was back on top of the Factory Stock division as he won over Tommy Groover and Nate Hill.


In the nightcap Frank Kennedy won the Four Cylinder main event over Jeremy Warren and Nick Kennedy who blew up in hot laps and was able to change motors at his shop and return for the feature.

Penn Can Speedway will be back in action Friday night June 21st for one of the biggest events of the season for the Bike Giveaway bring the Kids out for a great chance to take home a bike along with racing action for the Modifieds, 602 Sportsman, Street Stocks, Factory Stocks, 600cc Modifieds, Four Cylinders, Wingless Sprints and Juniors. Hot laps will start at 7 PM and racing beginning at 7:30 for all the latest updates find us on Facebook. Penn Can Speedway is located on Route 171 in Susquehanna, PA.