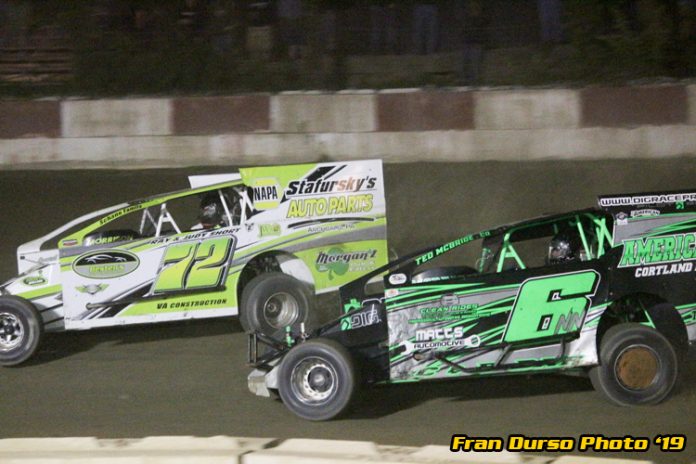 SUSQUEHANNA, PA – Nick Petrilak of Greenfield Township, PA slide to the lead in the second half of the Modified event and then held off a late charge from Brian Malcolm to take the victory Friday night at the Penn Can Speedway.  Friday was Bike Night at the track as over 200 kids went home with a bike courtesy of donations by the local racing community.  Bike Night brought out a large crowd and a packed pit area as 103 cars came for competition at the Susquehanna County oval.

“Our car was really good tonight things went our way.” stated Petrilak “After Malcolm showed his hand I knew we needed to put together three good laps.  The crew made big changes after the heat race and the car worked great I’m really proud of the crew.  The competition is so tough and if we want to win the championship we need to keep stacking up these wins.”

The 20 car starting field was led to the green flag by Brett Graham and Nick Nye for the 30 lap main event.  Nye led early with Petrilak able to slip into second ahead of Graham, Paul Rooney and Butch Getz.  Alan Barker and Brian Malcolm were working their way forward quickly from the middle of the pack as they battled to get into the top five.  Nye led as he entered lapped traffic ten laps into the race but Petrilak was close to his bumper as they ran around the 3/8 mile track.  At the halfway mark Nye led Petrilak, Graham, Rooney, Getz, Malcolm, Corey Cormier, Barker, Dominic Roselli and Mike Loney.  Rooney was able to get by Graham to take over the third spot as the action started to ratchet up in the second half of the event.  Petrilak started to turn up the pressure on Nye as they both looked for their second win of the season.  Meanwhile eleventh place starter Malcolm vaulted into fourth place with ten laps remaining.  Nye and Petrilak were battling each other and the lapped traffic.  Petrilak took advantage and powered into the lead around the outside of Nye on lap 22.  The first caution flew a lap later as Jesse Velez and Dan Soloman wrecked hard at the exit of turn four.  Petrilak led Nye, Rooney, Malcolm and newcomer Cormier down to the restart.  Following the restart Malcolm showed why he leads the track point standings he quickly slipped by Rooney then set his sights on the top two.  After a couple laps Malcolm zipped by Nye and with three laps remaining he was on Petrilak’s back bumper.  Malcolm was able to get to the inside of Petrilak as they entered turn three side by side but the caution flag halted action.  For the restart Petrilak changed up his line running the inside leaving Malcolm to try the outside Nye and Cormier were close behind the lead pair in the final laps.  Petrilak got the break he needed and didn’t waste it as he held off Malcolm at the finish line.  The win was the second on the season for Petrilak in his Starfursky’s NAPA No.72 Hig-Fab.  Malcolm of Lake Ariel, PA settled for second after his hard charge in the Grimm Constrution No. 119 Troyer.


“I was able to get door to door with him and I think we had him but the caution came out.” said Malcolm “The car was really good though to come from eleventh.  I tried the top but we just couldn’t get enough to get to him the last couple laps.”

Eighth place starter Cormier of Otisville, NY slid by Nye to grab the third spot at the finish in his Penn Can Modified debut aboard the Interstate Batteries No. 26R Hig-Fab.

“The car was a little different to start but it really came around in the feature.” said Cormier “The car was really working well it was a little tight but fast on the bottom I think we may have had something for them in a few more laps.  It’s my third time in a Modified we figured we’d come try it out here.”

In 602 Sportsman action Ray Leonard came out with the lead in a three car battle with Ryan Stone and Randy Brokaw.  Leonard led Brokaw with Mike Schane up to third.  Brokaw was searching for a way by Leonard while Schane was closing in on the lead duo.  Brokaw was able to finally lay claim to the inside lane and moved to the lead at the ten lap mark.  Schane used a restart to move to second however Brokaw maintained a steady lead over the field.  Brokaw was not to be denied as Schane tried all he had and never was able to seriously challenge.  They were followed at the finish by Leonard, Tim Howell and Matt Brewer.

The Street Stocks saw a great three car race for the victory between Lanson Albanese, Tyler Yeagle and Shane Wolf.  Albanese led with Yeagle and Wolf nipping at his heels.  Yeagle was looking to have a run on Albanese but got sideways and Wolf took full advantage.  Wolf went from third to first in one set of turns.  Yeagle got to second with five laps remaining.  Yeagle put on a charge but he came up a car length short as Wolf was able to get the win.  Albanese was third ahead of Jim Sykes and George Miller.

The Wingless Sprints saw several new cars in a good sign for the upstart class.  Don Smith led the race until Brady Simpson utilized a restart to get to the lead.  Simpson held the lead but Smith kept within striking distance until his car stopped under a yellow flag period with just one lap left.  Simpson held on to take the win over John Smith, Bruce Evans Jr., Gary Huston and Brandon Clapperton.

Bailey Boyd dominated the 600cc Modified event.  Tyler Smith put up a bit of a charge but Boyd was not to be denied.  Boyd was the winner and promoter Chad Towner offered up a challenge to Boyd if he starts at the back of the field next week and wins he’ll get an extra $250.  Smith was second ahead of Tim Frantz, Josh Mudge and Chace Scutt.

Mike Ferris led at the start in the Four Cylinder race but Nick Kennedy quickly jumped from third to the lead.  Frank Kennedy was up to second but was involved in wreck ending his night.  Nick Kennedy held off Andy Bolles with Ferris, Jason Colwell, Brian Salmini following at the finish.

In the Factory Stocks there was another three car battle at the front of the field between Tommy Groover, Josh Towner and Dusty Decker.  Towner pulled off a slide job but Groover drove right back by Towner then pulled off another slider and this one stuck.  Groover found a little more grip and moved back to the point.  Towner spun and collected several other cars including Decker.  Groover went on to the victory over Charlie Towner, Nate Hill, Levi Frink and Decker.

Bob Boughton bested Michael Wheelock and Harold Renwick in Senior division action.  Matthew Backus was back on top in the Junior division ahead of Julia Renwick and Calvin Wheelock.

Penn Can Speedway will be back in action Friday night June 28th with Kids Bike Races along with racing action for the Modifieds, 602 Sportsman, Street Stocks, Factory Stocks, 600cc Modifieds, Four Cylinders, Wingless Sprints and Juniors.   Hot laps will start at 7 PM and racing beginning at 7:30 for all the latest updates find us on Facebook.  Penn Can Speedway is located on Route 171 in Susquehanna, PA.