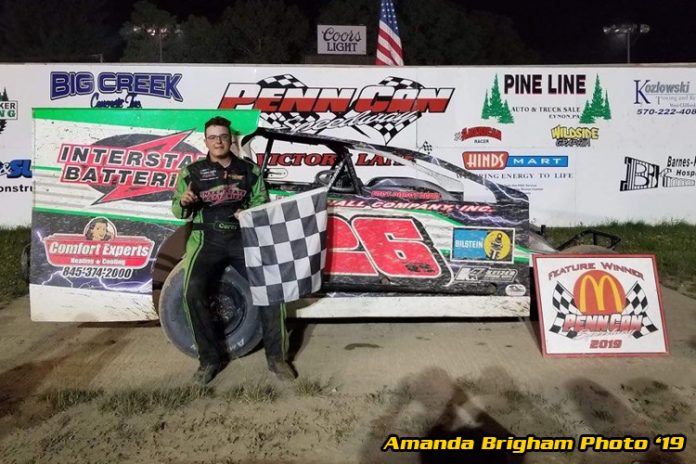 SUSQUEHANNA, PA – Corey Cormier of Otisville, NY went to the lead on a late race restart bypassing Nick Nye and held on until the checkered flag flew in the 30 lap event to grab his first ever win in a Modified on Friday evening.  The race was the fifth start of Cormier’s career in a Modified and just his second at the Penn Can Speedway after he finished third last week in his debut.  Brian Malcolm of Lake Ariel, PA finished second following him were Alan Barker of Norwich, NY; Mike Loney of Taylor, PA and Nick Petrilak of Greenfield Township, PA.

“This is incredible to win our fifth race in a Modified.” said Cormier in victory lane “I knew I had to try something I got a really good restart and I thought I got by him perfectly clean I hope there’s no hard feelings.  The car was great I felt like I was losing the tires a little but it was probably in my head when I got out front because the tires look fine.

The Modified field was led to the green flag by Nick Nye and Brad Szulewski.  Szulewski jumped into the lead at the start with Nye and Corey Cormier nipping at his heels.  Nye kept poking his nose inside Szulewski but he couldn’t slip by in the early going.  Cormier was within striking distance while Nick Petrilak was into fourth and Scott Landers rounded out the top five.  On a lap ten restart Nye got the jump on Szulewski by a small advantage but the caution negated his best opportunity at that stage to grab the lead.  Szulewski got a much better restart on the redo however Nye remained right there looking for Szulewski to make a mistake.  At the halfway mark Szulewski still led while running the middle of the speedway with Nye working the bottom Cormier ran third ahead of a hard charging Brian Malcolm, Mike Loney, Landers, Petrilak, Alan Barker, Brett Graham and Brad Shaffer.  Nye seemed to have a run on Szulewski on lap 22 as he got alongside but Szulewski once again kept his line and set the pace in his No. 14z.  Just a few laps later Szulewski suddenly slowed on the top of turns three and four ending his storybook first night of 2019 at Penn Can with apparent power plant issues.  Barker who ran in fifth place made some contact with the slowing Szulewski but was able to continue.  Nye led Cormier for the single file restart Cormier got a good jump and slide to the inside of Nye into turn one.  Cormier completed the pass and set his sights on the checkered flag however Landers stopped setting up another restart one lap later.  Under the yellow Nye surrendered second as he went to the pits to change a cut tire.  Cormier controlled the race to the finish for win number one for the Interstate Batteries No. 26R Bedell powered Hig-Fab.  Eighth place starter Malcolm was second once again in the Morrison powered County Waste No. 119.

“The car was good once again maybe if we can start a little closer to the front we can grab another win.” stated Malcolm “It’s a good run for us getting to second after starting eighth.”


Barker in the McCain Gas and Electric No. 77 come on in the later portion of the feature to round out the podium.

“I couldn’t get going early in the race and after the lap ten restart it was liked it flipped a switch.” said Barker “We got some sheet metal damage it was the caution we needed but I couldn’t get the car to turn.  It’s a good podium finish for us.”

Jerry Lobdell Jr. became a first time winner at Penn Can in the Street Stock division on Friday night.  Lobdell held off repeated challenges from the only two winners in the class this season Shane Wolf and Tyler Yeagle.  Lobdell took the win over Wolf, Yeagle, Eric Bonham and George Miller.

Tyler Smith dominated the 600cc Modified event leading every lap and once setting the pace on a late race restart.  The youngster Smith won for the first time this season over Josh Mudge, Bailey Boyd, Nolan Smith and Ayden Morgan.

In the Factory Stocks Charlie Towner led until lap four when Dusty Decker slipped by on the outside going down the front stretch.  Towner was left to battle for second with Tommy Groover as Decker pulled away.  Groover got to second with half a dozen laps left.  Decker held off Groover after a late race restart for his third win of the season.  Towner placed third ahead of Buck Mills and Grayson Albanese.

Steve Simpson and Don Smith swapped the lead several times early in the Wingless Sprints feature.  Simpson proved to be the best on the night as he won over Smith and Bruce Evans Jr.

Joshua Landers was the winner in the Junior division for his first victory of the season.

Penn Can Speedway will be back in action Friday night July 5th with another highlight of the season for the Fireworks Extravaganza along with racing action for the Modifieds, 602 Sportsman, Street Stocks, Factory Stocks, 600cc Modifieds, Four Cylinders, Wingless Sprints and Juniors.   Hot laps will start at 7 PM and racing beginning at 7:30 for all the latest updates find us on Facebook.  Penn Can Speedway is located on Route 171 in Susquehanna, PA.