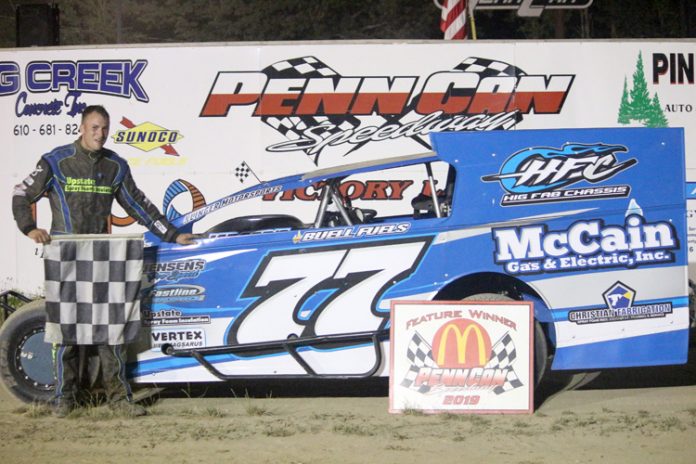 SUSQUEHANNA, PA – Alan Barker took home the Modified victory on Friday night at the Penn Can Speedway.  Barker of Norwich, NY was the winner over Brian Malcolm of Lake Ariel, PA; Nick Nye of Groton, NY; Byron Worthing of Owego, NY and Richard Smith of Accord, NY.  The night was highlighted by the Fireworks Extravaganza which wowed the large crowd.  Tim Howell of Lake Ariel, PA grabbed the win in the 602 Sportsman for his first at Penn Can while Dusty Decker (Factory Stocks), Jerry Lobdell Jr. (Street Stocks) and Nick Kennedy (4 Cylinders) all collected their second wins in a row.

Jeff Crambo and Danny Creeden led the 22 car Modified field to the green flag for their 30 lap feature event.  Creeden took the initial lead and after several early yellows he led Crambo, Nye, Barker and Kevin Jordan.  Nick Petrilak spun and collected three other cars.  Once racing resumed Barker made a power move bypassing both Crambo and Nye to take over second place.  Creeden held a solid lead over Barker while the best battle on the track was between Crambo and Nye for third.  Barker started to close in on Creeden as the race neared halfway.  Barker bypassed Creeden who then slowed and headed to the pits to change a flat tire.  For the restart the order was Barker, Nye, Crambo, 11th starter Brian Malcolm and Byron Worthing.  Nye put a bid in for the lead but the caution flew once again.  Malcolm moved up to third as the top three ran close around the 3/8 mile track.  Malcolm started to turn up the pressure on Nye as Barker held a narrow lead over them.  Nye and Malcolm continued to battle it out for second with Malcolm eventually taking the spot with four laps to go.  Malcolm couldn’t track down Barker in the final laps.  Barker now has the most wins in 2019 as he took win number three on the season in the Steve Klinger No.77 Hig-Fab.

“I was struggling to back in a rhythm but the last few laps felt the best of the night.” said Barker “We went back to what we were doing a few weeks ago and it worked well I think we may have found a little something more I think we’ll be good.  I was able to get a good restart when I jumped up to second normally you’re not that aggressive early but we made it work.”

Malcolm wound up with second for the third week in a row in the Sharkey’s Fuels No. 119.  The track point leader hasn’t finished worse than third all year.  “We just need a little draw luck so we can maybe finish one spot better.” stated Malcolm “The car has been great we just need some luck but once again the car is in one piece.”


Nye rounded out the podium after some bad luck last week he was pleased with a solid finish in the American Taxi No.6NN.  “We got a little tight in and loose off towards the end of the race.” said Nye “It was a good night of racing no doubt when you can roll the car back in the trailer with a top three.”

The 602 Sportsman saw some new faces at the front of the field.  Ryan Stone led early over first timer Michael Mondak after a two lap side by side race.  Stone and Mondak both slipped up and Frank Payne passed them both to take the race lead bringing Tim Howell along with him.  On a lap five restart Payne and Howell traded a little paint and Howell took over the race lead a lead he never give up.  Howell was the winner over Payne, Ray Leonard, Mike Schane who ran Mark Longstreet’s car as terminal issues stopped his primary ride and Randy Brokaw.

Jerry Lobdell Jr. withstood repeated challenges from Shane Wolf to take his second win in the Street Stock division.  Wolf seemed to have the speed to make the pass but a caution flew stopping his charge.  Lobdell regrouped and held off Wolf who charged to his inside in the final set of turns but couldn’t get drive off the corners.  Lobdell won over Wolf, Buck Mills, George Miller and Travis Brockner.

Buck Mills led the Factory Stock class until he suffered a flat tire handing the lead to Tommy Groover.  Groover and Dusty Decker had another good battle at the head of the class.  Decker tried to get a better jump on a restart but Groover held him off.  Then Decker committed to the far outside and slickly rolled around Groover with just a pair of laps to go.  Decker collected win number four over Groover, Nate Hill, Cyrus Homer and Kevin McDonald.

In the 600cc Modifieds Tyler Smith led until Josh Mudge drove to the point on a restart.  Mudge rolled to his third win of the season over Bailey Boyd who bested Tyler Smith in a near race long battle, following them were Ali Scutt and Nolan Smith.

Nick Kennedy came out ahead of Mike Ferris in an early side by side race in the Four Cylinder class.  Kennedy dominated the rest of the race for his fifth win.  Ferris settled for second then came Andy Bolles, Brian Salmini and Michael Brown.

Some invaders took control of the Wingless Sprint division on Friday night.  In a green to checkered feature Thomas Radivoy snatched the win over Eric Jennings, Charles Weslowski, Jeff Schall and Brady Simpson.

Joshua Landers was the Junior division winner for the second week in a row over Trevor Houghton.  Both youngsters are getting quicker every week.

Penn Can Speedway will be back in action Friday night July 12th for the Mid-Season Spectacular featuring racing action for the Modifieds, 602 Sportsman, Street Stocks, Factory Stocks, 600cc Modifieds, Four Cylinders, Wingless Sprints and Juniors.   Hot laps will start at 7 PM with racing beginning at 7:30 for all the latest updates find us on Facebook.  Penn Can Speedway is located on Route 171 in Susquehanna, PA.