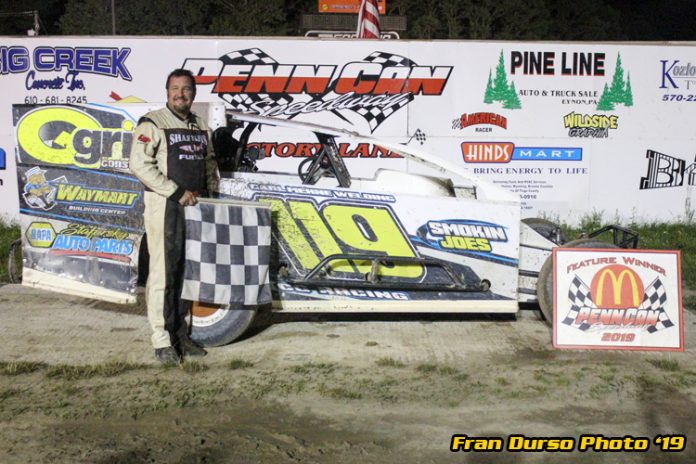 SUSQUEHANNA, PA – Brian Malcolm of Lake Ariel, PA made it back to victory lane on Friday night at the Penn Can Speedway.  Malcolm has had an impressive run this season at the Can as he hasn’t finished worse than third place all season.  Paul Rooney of Thompson, PA grabbed second for the second week in a row Nick Nye of Groten, NY was third ahead of Scott Landers of Binghamton, NY and Alan Barker of Norwich, NY.  Other winners at Penn Can were Mike Schane (602 Sportsman), Shane Wolf (Street Stock), Dusty Decker (Factory Stocks), Bailey Boyd (600 Mods), Nick Kennedy (Four Cylinders), Bruce Evans Jr. (Wingless Sprints), Doug Smith (Juniors) and Bob Boughton (Seniors).

Nick Petrilak and Paul Rooney made up the front row for the main event for the Sunoco Racing Fuels Modified division. In the early going Rooney was holding off Petrilak for the race lead.  Petrilak got the power down and went to the lead on lap seven leaving Rooney to battle Malcolm for the runner up spot.  Petrilak suffered a flat tire just before halfway relegating him to the back of the field.  Malcolm in the Grimm Construction No.119 Troyer went to the lead on lap 14 and never looked back.  Malcolm built up a sizeable lead in the second half of the event and took his second win of the season at Penn Can over Rooney, Nye, Landers and Barker.  Petrilak rebounded to finish sixth the rest of the top ten were Brad Shaffer, Joseph Brown, Steve Davis and Chris Hunsinger.  Modified heat wins went to Petrilak and Shaffer.

Mike Schane put on another dominating display in the Stone Bros. Automotive 602 Sportsman as he went to victory lane for the sixth time this season.  Schane was followed at the checkers by Corey Cormier, Gene Beadle, a debuting Alex Konopka and Matt Brewer.

In the Insinger Performane Street Stock event Butch Green led every lap but in post-race inspection was found to have an illegal tire handing the victory to Shane Wolf.  Following Wolf in the official finish was Jim Sykes, Tyler Yeagle from last, Damon Decker and George Miller.

Dusty Decker was the Factory Stock winner over Sheldon Whitman, Cyrus Homer, Nate Hill and Tommy Groover.  Bailey Boyd won for the fifth time in the Leeward Construction 600cc Modifieds ahead of Doug Lattner, Tyler Smith, Nolan Smith and Travis Rooney.  Nick Kennedy is now a six time winner in the Four Cylinder division as he bested Andy Bolles and David Fox.  Bruce Evans Jr. outlasted his competitors in the Wingless Sprints while Bob Boughton was the Senior class winner..  Doug Smith made another Wayne County No.119 in victory lane as he was the Cobble Creek Landscape Junior division winner over Trevor Houghton.


Penn Can Speedway will be back in action Friday night July 26th for the Pappy Beavan Memorial to honor the founder of the Speedway it will also be Penn Can Hall of Fame night and Legends night as the track honors the rich racing history of the Susquehanna County oval.   All the regular racing divisions will be in action.   Hot laps will start at 7 PM with racing beginning at 7:30 for all the latest updates find us on Facebook.  Penn Can Speedway is located on Route 171 in Susquehanna, PA.