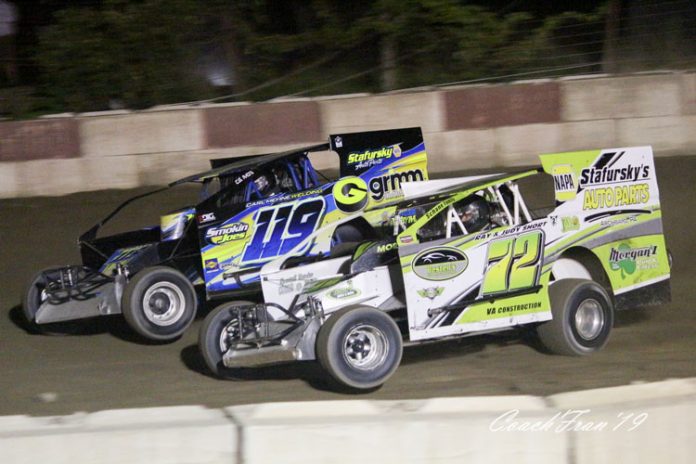 SUSQUEHANNA, PA – Brian Malcolm grabbed his third win of the season on Friday night at the Penn Can Speedway. Malcolm held off Nick Petrilak in the early laps and went on to lead all 30 laps in the Modified feature. Friday was Backpack Night at the track and thanks to CK General Contracting and the track staff every kid in attendance went home with a backpack full of school supplies. Other feature winners at the 3/8 mile oval were Mike Schane (602 Sportsman), Shane Wolf (Street Stocks), Tommy Groover (Factory Stocks), Jamie Frantz (600cc Modified) Jeremy Warren (Four Cylinder) and John Smith (Wingless Sprints).

Brian Malcolm and Nick Petrilak led the field to the green flag with Malcolm taking the lead at the start. Malcolm ran the outside with Petrilak on his inside. Petrilak was able to get back side by side with Malcolm at the end of lap one. The lead pair ran side by side behind them ran Alan Rudalavage, Paul Rooney and Leo McGurrin. On the third lap Malcolm got a good run and cleared Petrilak however Petrilak charged back and was side by side with Malcolm at the end of the third lap. Malcolm cleared Petrilak on the next lap but by lap six Petrilak was once again alongside of the race leader. The stellar early race battle was halted with a lap eight caution flag. Following the restart the lead battle calmed down as Malcolm led Petrilak, Rudalavage, Rooney with Alan Barker into the top five with ten laps down. At the halfway point the best race was for fourth between Rooney and Barker. Petrilak started to cut into the lead Malcolm had built with ten laps remaining before cautions on back to back laps slowed the pace. Rooney and McGurrin both had flat tires dropping them to the back of the field. Malcolm held a steady lead through the restarts with Rudalavage trying to hold off a fast closing Barker. Barker grabbed third after a tight battle with two laps to go. On the next lap both Rudalavage and Pecko ended up spun out at the exit of turn four ending their top five runs.
Malcolm of Lake Ariel, PA controlled the green white checkered finish to extend his point lead slightly with his Grimm Construction No. 119.

“I knew I had to beat him on the first lap to get to the outside.” said Malcolm “The track was better up high for us, the car was good plus we got our better motor back in the car.”

Petrilak of Greenfield Township, PA had to settle for a solid second place finish with his Sleep Hollow Turf Equipment No. 72.


“We tried everything, we were good on green flag runs but really struggled on the restarts.” said Petrilak “We needed a green flag run at the end we just lacked a little side bite tonight.”

Barker of Norwich, NY in the Klinger No. 77 moved forward from seventh to finish third.

“That was a lot of fun tonight.” stated Barker “We didn’t draw too well tonight but we were able to move forward. We changed torsion bars after the heat race I was just a little too free on the setup.”

Completing the top five were Dan Pompey of Kingsley, PA and Mike Nagel of Susquehanna, PA. The rest of the top ten were Rooney, Chris Hunsinger, McGurrin, Jamie Bedford and Pecko. Heat races were won by Malcolm and Petrilak.

In the Factory Stocks Tommy Groover got his eighth win in dominating fashion. After being halted by a lapped car Groover then pulled away to win by nearly half a lap over Nate Hill. Phil Burns placed third. John Smith led all the laps in the Wingless Sprint division main he was followed by Tom Savage and John Hrinko.

The 600cc Modified race was led by Nolan Smith at the start over Jamie Frantz and Doug Lattner. Frantz utilized a lap four restart to get the better of Smith to take the lead. Frantz built a solid lead while Nolan Smith raced Tyler Smith for the runner up spot. Frantz kept inching away and finished with a sizeable advantage over Nolan Smith, Tyler Smith, Lattner and Travis Rooney.

Andy Bolles grabbed the initial lead of the Four Cylinder main over Jeremy Warren. Bolles and Warren were joined by Nick Kennedy in the race for the lead. Warren grabbed the lead then Bolles slowed but was able to continue at the tail of the field. Warren and Kennedy started a near race long battle on the restart with Kennedy working to the inside of Warren lap after lap. Warren was able to hold off Kennedy who started to show smoke on lap nine. Warren held on to win over Bolles who charged back through the field with Kennedy third after he slowed on the last lap. David Fox and Josh Wilder completed the top five.

Mike Schane got his eighth win on the season in the 602 Sportsman race. Schane was trailed early by Frank Payne however on a restart Payne and Carl Bittenbender came together battling for second. Bittenbender suffered damage and Payne was penalized for contact. Brandon Oleski was the next to challenge Schane and raced him side by side on the restart but Schane pulled back ahead in turn three. Schane went on to take the win over Oleski, Tim Howell, Alex Konopka and Matt Brewer.

In the night cap Street Stock event Jim Sykes led early over Dan Force meanwhile late arrival Shane Wolf was charging up the running order. Wolf was second on lap seven and tracked down Sykes. Sykes held him at bay until lap 14 when Wolf charged into the lead. Wolf took his eighth win on the season over Sykes and Force.

Penn Can Speedway will be back in action Friday night August 16th with Fan Appreciation Night along with racing action for the Modifieds, GRIT Series 602 Sportsman, Street Stocks, Factory Stocks, 600cc Modifieds, Four Cylinders, Wingless Sprints and Juniors. Hot laps will start at 7 PM and racing beginning at 7:30 for all the latest updates find us on Facebook. Penn Can Speedway is located on Route 171 in Susquehanna, PA.
Penn Can Speedway 8-9-19 Results