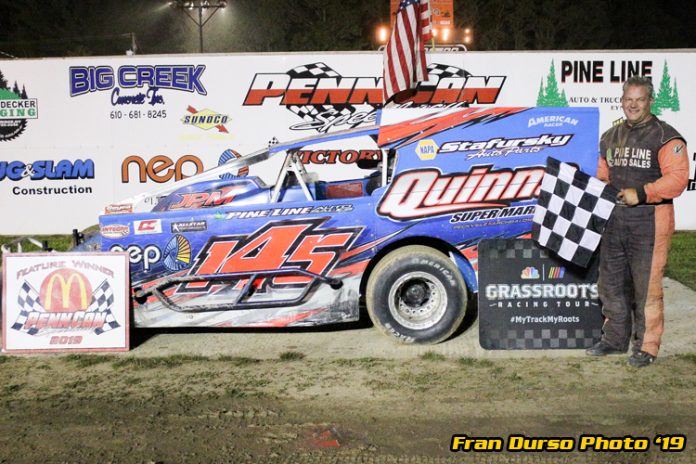 The Modifieds were led to the green flag by Alan Rudalavage and Mike Walsh with Rudalavage jumping into the lead. Justin Holland ran into the back of Brian Malcolm and spun him out drawing the caution flag and dropping them both to the back of the field. Rudalavage led Nick Petrilak, Dan Pompey, Alan Barker and Nick Pecko down for the restart. The restart was the turning point of the race as Petrilak broke the hub of his wheel and turned sideways in front of the pack. Six cars were locked together with at least three others suffering some damage. Petrilak, Holland, Joe Eisenhauer and Paul Rooney were done for the night while the other cars in the melee returned for the ensuing restart that saw just ten cars remaining. Rudalavage and Pompey became hooked together briefly on the restart but the separated and a no start was called. Rudalavage controlled the race while behind him Pompey and Malcolm battled for second. Pompey ran high and narrowly kept the low line running Malcolm behind him. At the halfway mark Rudalavage had a solid lead over Pompey and Malcolm who had a large gap back to a close battle between Jamie Bedford, Brad Shaffer and Nick Pecko. Pompey packed his wheel with mud and headed to the pits just after halfway. Rudalavage worked well through lapped traffic to maintain his advantage over Malcolm. Pecko was into fourth and was closing in on Bedford for third with ten laps remaining. Just a few laps late Pecko got the better of Bedford to take over third while Rudalavage continued to roll in the race lead. Rudalavage crossed the finish line first in his NEP sponsored No. 145 and left just the top three on the lead lap.

“It must have been a full moon tonight.” stated Rudalavage in victory lane “It was a great track with great people and it’s great to be back in victory lane. Our little JPM 358 had her tongue out but it worked well tonight I have to thank them my crew and sponsors.”

Malcolm of Lake Ariel, PA in the County Waste No. 119 extended his points lead with his second place finish. “We suffered some damage in the pileup.” said Malcolm “We broke a shock but were able to change it but we didn’t really have much side bite but it was a good recovery.”

Newcomer to the Dirt Modified ranks Pecko of Forest City, PA placed third in his R.B. Fries No. 42.

“It was a good run for us but the car’s torn up pretty bad.” said Pecko “I was about to park it after the pileup but I figured we’d go back out and we were able to get to third. It’s only our third time in a Dirt Modified.”

The rest of the top five were Bedford of Glenwood, PA and Shaffer in his best run of the season. Chris Hunsinger, Walsh, Barker, Jerry Tonti and Pompey completed the top ten. Heat race wins went to Malcolm, Petrilak and Holland.

Mikey Smith put on a clinic in the Wingless Sprint feature event as he led every lap and nearly lapped the field. Don Smith was second ahead of Brandon Clapperton and John Hrinko. In the combined Junior and Senior Division event Rodney Renwick dominated with the battle for second on the track and first in the Juniors came down to the final set of corners. Trevor Houghton had the spot and Julia Renwick wanted the spot. Renwick ran into the side of Houghton forcing him up the track and getting by. However she was penalized for the contact handing the Junior win to Houghton.

Jared Green was another driver in a league of his own on Friday as he led all the laps and rolled to the victory in the 600 Modified class. Nolan and Tyler Smith battled it out for second in the first half of the event but Nolan slowed just after halfway and went to the infield. At the finish it was Green winning over T. Smith, Dustin Zimmer and Ayden Morgan. Andy Bolles grabbed the win in the Four Cylinder division he was trailed by Ronnie Welch and Jim Backowski.

The GRIT Series Southern Riders Division came to battle Penn Can’s own 602 Sportsman in a 30 lap special event. Ryan Stone led in the early going over Michael Mondak. A few laps into the event Mondak was able to grab the race lead ahead of Stone, Brandon Oleski, Randy Brokaw and Frank Payne. The top five remained the same at the halfway mark with the best battle being for the fifth spot between Payne and Mike Schane. The top five remained the same until Brokaw slowed with just six laps remaining. On the restart behind Mondak they raced four wide but the caution flew. On the next restart one lap was scored before another caution on the single lap run track dominator Schane moved from sixth to third. Stone washed wide on the restart letting Schane slip by and start to battle Mondak for the race lead. Mondak battled hard to control the bottom line and he maintained the lead until another caution flew with two laps to go. Under GRIT rules it was a double file restart and Schane took full advantage. Schane charged to the top spot on the outside lane and pulled away from Mondak with Payne up to third place. At the finish Schane grabbed the win by half a straightaway over Mondak, Payne, Dale Welty and Stone.

“Thank the GRIT guys for coming down and Penn Can for the great track tonight.” stated Schane “The double file restarts worked out for us tonight. We tried something in the heat race but we ended up going back to our normal setup and it worked out.”

NOTES: Bruce Evans Jr. flipped his Wingless Sprint car during the first heat race of the night. He was transported to an area hospital for further evaluation he did suffer a concussion. On Sunday August 25th the Speedway will play host to a benefit to help racer Will Eastman who suffered burns several weeks ago at the Speedway. There will be no racing at the track next Friday. The regular season will conclude August 30th at the track for Championship night.